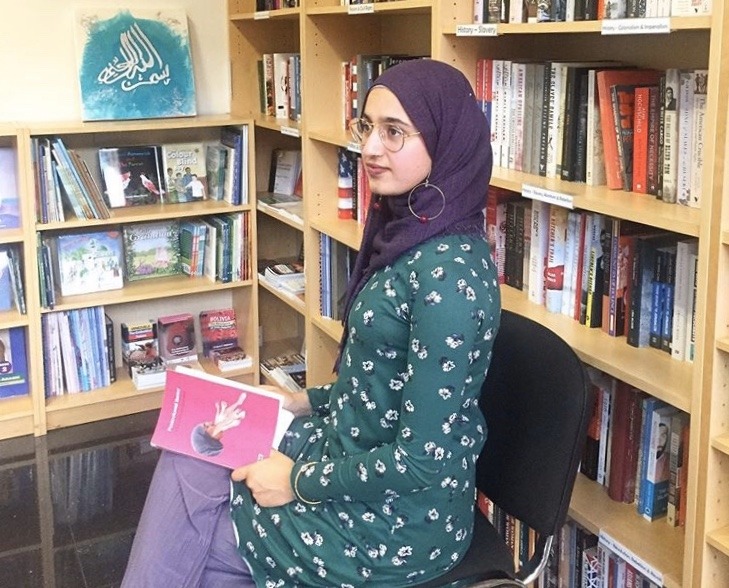 Watch the full event from the IHRC YouTube channel:

The event began with Muneeza Rizvi introducing Suhaiymah Manzoor-Khan, Postcolonial Banter and asking Suhaiymah to introduce the book in her own words. Suhaiymah said, “I come from a background of spoken-word poetry, so I see the poetry collection as a mixture of those pieces, an archive of what I have performed, and also some of the more personal things that I have written overtime.” Suhaiymah talked about the importance of creating a source of knowledge when something is written, and so she wanted it to be something people could learn from. “It is also a call for action and a provocation. Being a visibly Muslim woman of Pakistani heritage in the UK, there are certain things that people would want me to write about, certain gazes upon the book, upon me and the writing, so it is a poetry collection that is trying to be other things and not just be the thing that it is said to be… It is a reflection of the work I am trying to do: avoid the gazes as well as speak back to them. All in all, it is a personal and political collection of thoughts and questions that I wanted to share with world.”

Suhaiymah then performed on of her writings: A poem that winds through Lewisham streets.

Muneeza asked if Suhaiymah could explain the context boxes that appear throughout the book.

“The context boxes are at the end of some poems, similar to an extended footnote, giving either some political context or historical, personal context,” Suhaiymah says. “Coming from spoken-word, you get to situate it. The thing that scared me about page poetry is that the words are just there which can be completely decontextualized – sometimes that’s fine, and there is a beauty and power in that. But with some poems, I wanted to explain where it had come from because that added something to it.  It is also important to explain some of those contexts as they are deliberately hidden from us sometimes. For example, with the poem British Values there are a lot of references that could be misconstrued when I deliberately included them for political reasons and I am trying to reveal some elements of state violence. So they are there as points of interest and general introductory texts.”

Muneeza talked about the distinction Suhaiymah makes between page poetry and spoken word, “these are contested terms: spoken word, poetry, performance poetry how do you situate yourself within this form, because when I think of spoken word, I think of the Black arts movement in the States like Sonia Sanchez, who talk about the experiential life, but always in reference to unceasing violence of capitalism and racial antagonism, so how do you navigate this form of poetry?”

Suhaiymah explained, “[the] merging of orating with political messaging is fantastic. There is something about so many colonised cultures having oral cultures and storytelling, even from an Islamic point of view, the recitation of words and the public dissemination of knowledge has a power that we don’t have when it is written down.

The reason I got into it [spoken-word] is because it is cathartic – when you perform, you are in dialogue because the audience have to listen to you, you will be listened to. There is also no pretence that your identity doesn’t matter – what I was writing was bound with the idea that I was being seen when I was reading it.” Suhaiymah also discussed navigating the gaze – the colonial gaze, white supremacist gaze, male gaze – very consciously and being in front of people when soeaking.

On page poetry, Suhaiymah mentioned “trusting the work to speak for itself and [that] it matters for this work to exist in physical form also as a form of archiving.”

Muneeza asked, “throughout the book, it is clear to me that there is a very concerted effort to resist the trappings of multiculturalism or the logic of diversity which obviously celebrates difference but in a way that freezes and depoliticises it… what do you mean by secular concepts of identity?”

Suhaiymah explained, “when I say secular concepts of identity, it is coming from this question, ‘what would it look like to describe myself on my own terms?’ – I think it is the main question that this collection grapples with, and also, ‘what questions would I answer if I was decontextualized?’ As a Muslim, my primary identity is a soul that is in submission to God, but there is no space to articulate what that really means.”

Muneeza also enquired about who are the intended audiences are:

Suhaiymah said, “the audiences are varied but a lot of the audiences don’t speak to each other but I can speak to them, for example people at the women’s march and people at Lewisham mosque – they are never in the same spaces.” She also discussed the people who share the experiences and resonate with them and said she feels blessed to get that audience because she is able to articulate something many others can also feel. There is also the other audience who are unsettled and their comfort is disrupted by Suhaiymah’s work, which she hopes would open up new ways of thinking about things. “Poetry itself is clever because no one feels attacked; positioning something as art or creativity neutralises that fear element when people interact with it.”

Postcolonial Banter is available to purchase from the IHRC Bookshop.

Muneeza Rizvi is a PhD Candidate in the Department of Anthropology at University of California, Davis. Her ethnographic research examines intra-Muslim moral disputation, and how Islamic practitioners in Britain are conceptualizing the Syrian War. Her fieldwork has been generously funded by the Social Science Research Council (SSRC) and Wenner-Gren Foundation for Anthropological Research.