Event Report: What now for Europe? The instrumentalisation of the Paris attacks

Home
Events
Event Report: What now for Europe? The instrumentalisation of the Paris attacks 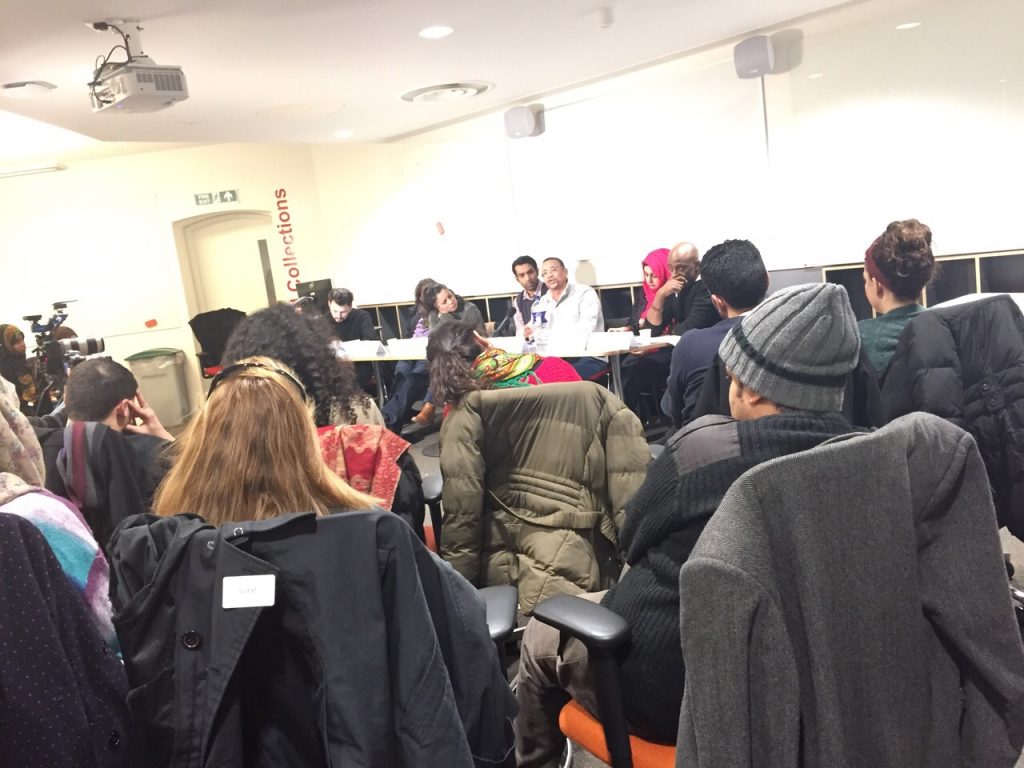 The Islamic Human Rights Commission held a last minute public meeting, ‘What now for Europe? The instrumentalisation of the Paris attacks’ on Saturday 24th January following the violent attacks in Paris, early January. The event featured a diverse platform of speakers; both Muslim and non-Muslim and from various academic and activist backgrounds. The meeting was initiated to discuss the immediate aftermath and examine what rhetoric will follow and what directions Europe will take in the medium and the long term.

The panel of six, chaired by Abed Choudhury, gave short presentations based on their experiences, attitudes and viewpoints towards the incidents in Paris and its effects, followed by a conversation with the audience.

Our first speaker, Houria Bouteldja, a French citizen of Algerian heritage, is the founder and spokesperson of French decolonial political party, Party of the Indigenous of the Republic (PIR). Houria discussed injustice as being in the nature of the French republic. There is little scope for solutions for stopping French involvement in international wars as well as solutions for its internal problems, including Islamophobia. Despite the French elite able to influence a nihilistic behaviour in the most fragile, Houria stressed we still have a responsibility to do something.

M’Baireh Lisette is an expert in crisis management. His activism, rooted in the French colonisation of Chad, has been fuelled by the independence of Chad, the social movements in Africa, France and Palestine, and by the struggle of PIR for a decolonial political alternative. M’Baireh mentioned the comments made by French MP Manuel Valls about tackling ‘apartheid’ in French cities which is a reminder that white power is the only legitimate custodian of violence. The elite frames the way you think about power and PIR has the ability to disrupt this.

Ramon Grosfoguel, professor in the Department of Ethnic Studies at the University of California at Berkeley, discussed the effects of French colonialism and how this rhetoric plays out in society today. There is a struggle in which Islamophobia is voiced more loudly which calls for extreme right wing solutions, so much so that now in France, even the left and anti-Fascists are speaking in the same way as the right. France has also clarified the meaning of laicite in the last 20 years, to fit its colonial obsession with Muslims. The French have never respected the freedom of speech of colonial subjects and it is this hypocrisy that pushes fragile youth into destructive mode.

Kevin Cobham, Cambridge educated criminal defence lawyer and human rights advocate, discussed the hypocrisy of the West by mentioning the 43 students killed in Mexico and the lack of coverage and protests of the events in the West. What matters in Europe is property, and part of that property is Whiteness.

Richard Seymour, writes for the Guardian and appears on TeleSur. Richard mentioned the exacerbating presence of Islamophobia in Europe and the state structural, race-making processes that turn Muslims into a race as well as marginalising Muslims.

Arzu Merali, co-founder of IHRC and Head of Research, made mention of the number of demonstrators that protested against the Pediga movement in Germany, describing it as a small victory in a battle. It was surprising to see that level of mobilisation in Europe and there was a question of whether we will be seeing that in the UK. Arzu also referenced Muslims’ sophisticated and nuanced understanding of the media but still a vertical viewpoint.