First, we should love ourselves 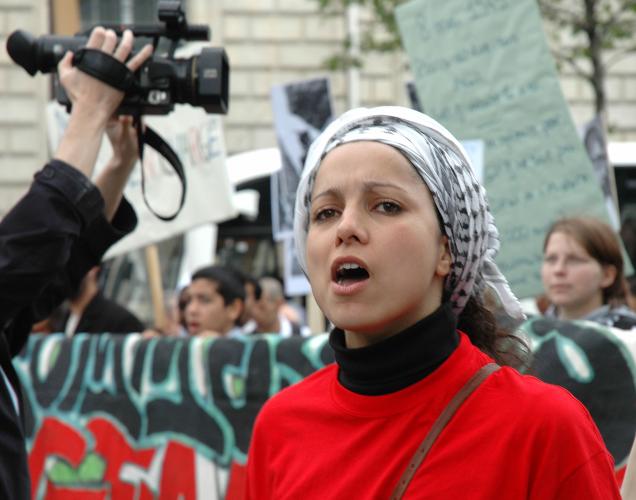 [3 December 2011, En savoir plus en français] We are here in the third edition of the meetings on immigration, dedicated this year to Frantz Fanon. As such, I am speaking as a daughter of immigrant parents namely; my father was a construction worker, who could not enjoy his retirement like many other immigrants as he died of a disease related to his work. My mother was a housewife.

I speak also as a political activist. Indeed, I belong to the PIR (Party of Indigenes of the Republic). I emphasize the political nature of my comments because these meetings have the objective to create a united front in popular and immigrants neighborhood and to me, “political”, means creating a force capable of defending the interests of those residing in the above-mentioned neighborhood but also to further conquer our share of power which we are excluded from.

As a preamble, I would like to present some elements in the context which these third edition meetings were held in:

1. We are here in Créteil. Créteil is a suburb of France. France is not just any country in the world. It plays a key role. It belongs to the Western Bloc. France is a Member of most major international bodies that run the world: the UN Security Council, United Nations, NATO, and G8. Currently, France intervened militarily in Libya, Ivory Coast, and Afghanistan… Créteil is a suburb of western civilization.

2. We are currently experiencing an unprecedented economic crisis where even the middle classes are affected. We are witnessing the decline of the West as manifested by the emergence of other regional powers: China, India, Brazil, Iran and therefore the end of the Western hegemony. This is usually accompanied by growing success of right wing nationalists and racists whilst the left wing alternative is left struggling and that the lowest layers of the peripheries of which include immigrants and their children are not most often organized politically.

3. The Arab revolutions. They re-distribute the cards not only geographically and politically but also locally. These revolutions are historical. They surprise us and show us that hope is possible. And they have even more importance and of symbolic value that many neighborhood residents are from Arab countries.

4. We celebrate the 50th anniversary of the death of Fanon but above all we are 50 years of African Independence and in particular 50 years since the Independence of Algeria, which was traumatic for France. It is significant to see reappear nostalgic speeches from the colonial era. I refer to the Act of February 23, 2005 and the Dakar speech that proclaimed that the African man had not entered into history.

5. It has been six years since the 2005 riots. To date, no political solution has been found to this great uprising in the Districts. There is instead a deterioration of the situation.

6. We are within weeks of the trial of Villiers-le-Bel, where young men received very heavy penalties. This is very ominous. Moreover, in the last week, we regretted 3 gangland killings in the neighborhoods which is becoming a worrying phenomenon. Young people from towns kill each other.

7. Finally, we discuss this year’s presidential campaign which we expect to turn out the worst.

In this environment, it is urgent to give the words of Abdelmalek Sayad “To exist is to exist politically” a real political meaning. Give him the flesh. As recalled by Said Bouamama, this morning, the collective solution will or will not. There is no personal choice. I would add that if we are disunited in the fight, we will inevitably be united in the defeat.

There is an urgent need for a union of neighborhood associations and those of immigration.

1. It must be done in autonomy even if autonomy is not a premise but rather a project. Our first step today towards this autonomy is granted by the fact that, only, the neighborhood associations and immigration are allowed to form a future front. Said said it also this morning and I agree with him: To make alliances, we must first treat each other as equals.

2. It must be done in joint actions, priority projects: Police crimes, Race-based identity controls, the voting rights of immigrants, the fight against Islamophobia and negrophobia …

3. It must be done in the tradition of the struggles of immigration and anti-colonial. We do not come from nowhere. I love this comment from Saida Kada, an activist from Lyons, who once said “it seems that our story begins with Sonacotra homes”. Of course, there are Sonacotra Homes. But there is also our past and our history. In the words of the very inspired Sayad “you must not say” an immigrant “but” resulting from the settlement “. Not just because we are the heirs. The history of slavery, colonization and immigration should not only be taught to residents of the neighborhoods. It must be taught in all schools in France because it is the story of all the French. Best of all, it is also our fight, collectively, to ask the question to the French people as we celebrate the 50th anniversary of Algerian independence: “The Algerian independence is certainly the defeat of the French state and its supporters but is it, equally, the victory of the French people as well as a victory for us”. It’s a real issue and we need to ask this question, especially during the campaign periods. How can we make a harmonious society, talk about living together when some consider Dien Bien Phu as a defeat? Cesar said that colonization and slavery de-civilized Europeans. I would say therefore that the act of recognizing our independence as legitimate victories re-civilize Europeans.

Finally and as a woman, I would like to conclude by my point of view. As a woman of an immigrant, I underwent a state of ideology which Ouassak Fatima said talked about earlier on. There are specific policies that target women of immigrants. Yes, there are contradictions in our midst (black / Arab, male / female, believers / non believers, differences in social class) but they must be handled internally. Otherwise, they will be manipulated. Our first step is to resist and confirm our solidarity in our neighborhood, our family solidarity, solidarity in our community… confirm respect for ourselves, respect for our parents, workers, immigrants, respect of our identities and our beliefs. Of our fathers who often die before retirement age. And our mothers, who often were housewives or stayed at home. I still see too many people who are ashamed of their parents. Remember the famous slogan of African Americans “Black is beautiful.” It is a motto that I respect a lot because it is an important step in the black consciousness, and it marks the moment when blacks start to understand that to advance, they must love each other and be rehabilitated. It’s the same for us. We need to love ourselves! We must love each other. James Baldwin, one of the greatest writers of the black consciousness went further. He said “Black is not beautiful, black is political.” This is the final stage of consciousness; that we need to reach for true liberation.

I would like to finish with a comment that may seem completely apolitical, but I think that this United Front of our neighborhoods and immigrants, to build it, we must first stop being ashamed of our parents. Only those who have this awareness can build it!

By Houria Bouteldja, spokesman for the PIR. Translation Alvin Mabushi.