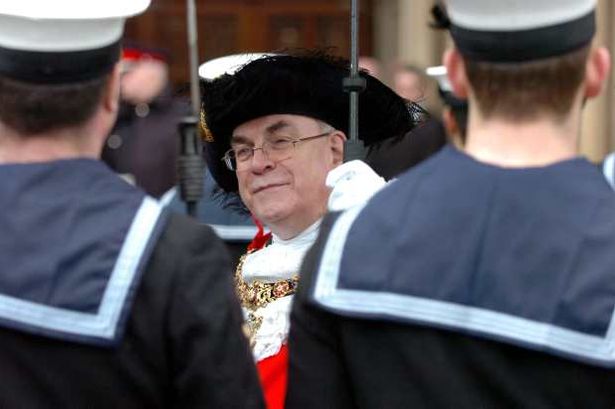 A former Lord Mayor has been found to have bullied a Muslim anti-war protester by repeatedly claiming he could be a terrorist.

Mark Hackett emailed the unnamed man – who had invited him to speak at a Gaza-related event – a bizarre tirade of abuse last summer, copying in all the city’s councillors.

He claimed the man was possibly in an Islamic State ‘sleeper cell’ in Salford and suggested he could be linked to last year’s murder of taxi driver Alan Henning.

An internal investigation has found Coun Hackett had been variously ‘abusive, disrespectful, bullying and defamatory’ towards the man.

Coun Hackett has now apologised and retracted the comments, although the council has yet to take any action.

In August last year Coun Hackett was invited to speak at a Stop the War Coalition event at the height of the Gaza protests in Manchester city centre.

He did not attend, but afterwards issued a series of emails to the man who invited him.

As well of accusing his group of supporting Islamic State, he made a statement to the police regarding the man, whom he did not know, ‘alerting them to his possible role in the abduction of the Salford taxi driver in Syria and his possible role as an Islamic State sleeper in Salford’ and suggesting he might run off to Syria.

An internal investigation into his behaviour concluded in July but was not published. However the M.E.N. has now seen a copy of the report, which shows the Charlestown councillor later admitted his allegations were ‘not based on any factual evidence’.

He was found to have broken three sections of the council’s code of conduct – bullying, intimidating a complainant and bringing his office into disrepute. He denied he was Islamophobic.

Speaking anonymously via the Islamic Human Rights Commission, the man said: “Since it happened I’ve not been going out as much and I’ve increased security around my house. It does affect you. It also makes you think that when somebody does this to a Muslim or non-white person, no one is going to do anything about it.”