The Quest for Unity and other selected works 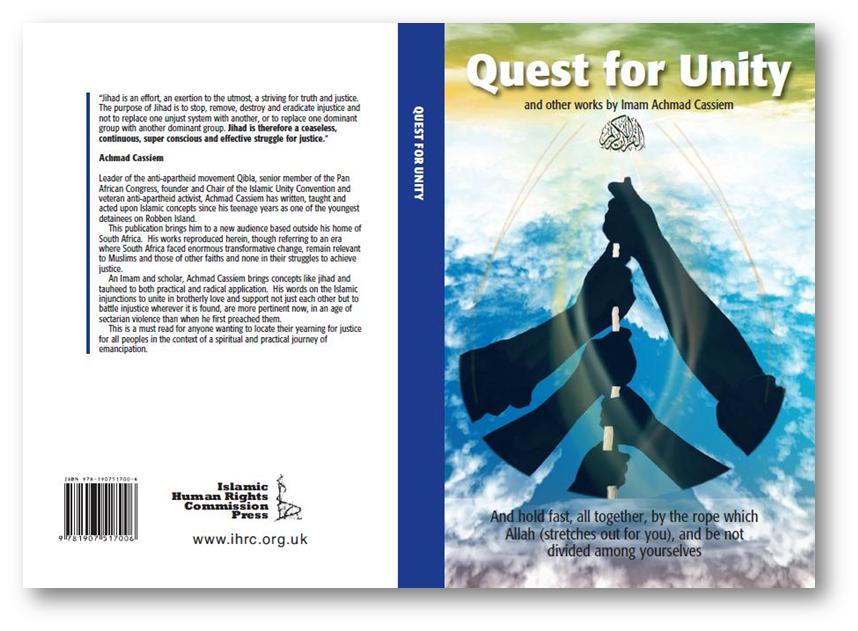 For the Month of Ramadan 1433 / 2012, IHRC Press is making the work ‘Ramadan: A Month of HIgh Intensity Training’ and Imam Cassiem’s Eid Message on the universality of Islam, from this book, available for free download.  Please read, use and share widely.  Please download from here or at the end of the page.

Buy the report here.  IHRC Press is delighted to announce the publication of the first of its titles, The Quest for Unity and other selected works by South African activist and cleric, Imam Achmad Cassiem.

Cassiem is a veteran anti-apartheid activist who was imprisoned on Robben Island with Nelson Mandela for two terms, the first of which when he was only seventeen years old.  An active member of the Pan African Congress, Cassiem headed Qibla, the Islamic movement that fought apartheid with the many comrades of different movements.  In this republishing of some his key works, published towards the end of the apartheid era, both his concerns for the dismantling of apartheid and the unity of humankind as exemplified through Muslim unity are expressed, using Islamic teachings and Qur’anic revelation.

In the main work, ‘Quest for Unity’ he lambasts the continuing divides amongst Muslims that see them, in his opinion, ally themselves with oppression, through disregard for Qur’anic injunctions to unite.  Through the command for unity, Cassiem discusses the concept of justice and a just social order.  In ‘Ramadhan: The Month of High Intensity Training’ Cassiem provides not only access to certain regular supplications and their meaning, but also explains how changing oneself is the first and crucial step on the road to changing the world.

In ‘The Intellectual Roots of the Oppressed: Islam’s Triumph Over Apartheid’ Cassiem argues that the end of the apartheid era is near and cites Islam as the ‘lost property’ of the Azanians and all oppressed peoples, drawing on his explanation of Islamic justice.

In ‘Islam’s Triumph Over Apartheid’ Cassiem expands on the idea of Ummah.  His explanation of the concept centre the Islamic community at the centre of the ongoing struggles against oppression in its many forms including racism, nationalism and dehumanisation.

This book is interesting for many different audiences: from the transnational activist, to the historian of the anti-apartheid struggle and other liberation struggles.

With struggles for liberation still ongoing around the world, Cassiem provides some context for Islamic activism within all of them.