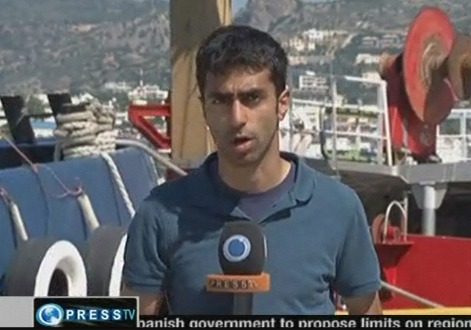 One of the activists is Paul Murphy, Member of European Parliament (MEP). He said in a 3 minute phone call from Givon prison “Our boat was almost sunk by the manner in which it was approached and boarded by the Israeli navy. People were shackled and deprived of all personal belongings. We remain defiant and unabashed at our mission which again has served to expose the criminal nature of the Israeli state in its blockading of Gaza from those of us who wish to provide aid in order to alleviate the poverty and suffering the people there endure.”

Hassan’s fate is still unclear and we have not heard from him.

Ismail Patel, Chairman of Friends of Al Aqsa said ‘I was on board the Mavi Marmara with Hassan in 2010 when we saw 9 activists shot dead by the Israeli navy when they violently boarded our ship. Friends of Al Aqsa are calling for our government to secure the immediate release of Hassan so he can return back to his family in Scotland.’

Please email Alistair Burt MP, Parliamentary Under Secretary of State at the Foreign & Commonwealth Office (alistair.burt.mp@parliament.uk)asking for him to call on Israel to immediately release Hassan Ghani. CC your email to Alex Salmond, First Minister of Scotland (Alex.Salmond.msp@scottish.parliament.uk) so he is aware of the situation.

Friends of Al-Aqsa is a UK based non-profit making NGO concerned with defending the human rights of Palestinians and protecting the sacred al-Aqsa Sanctuary in Jerusalem. This vision is supported by various international groups and organisations. Friends of Al-Aqsa was first established in 1997 and now has an international support base.