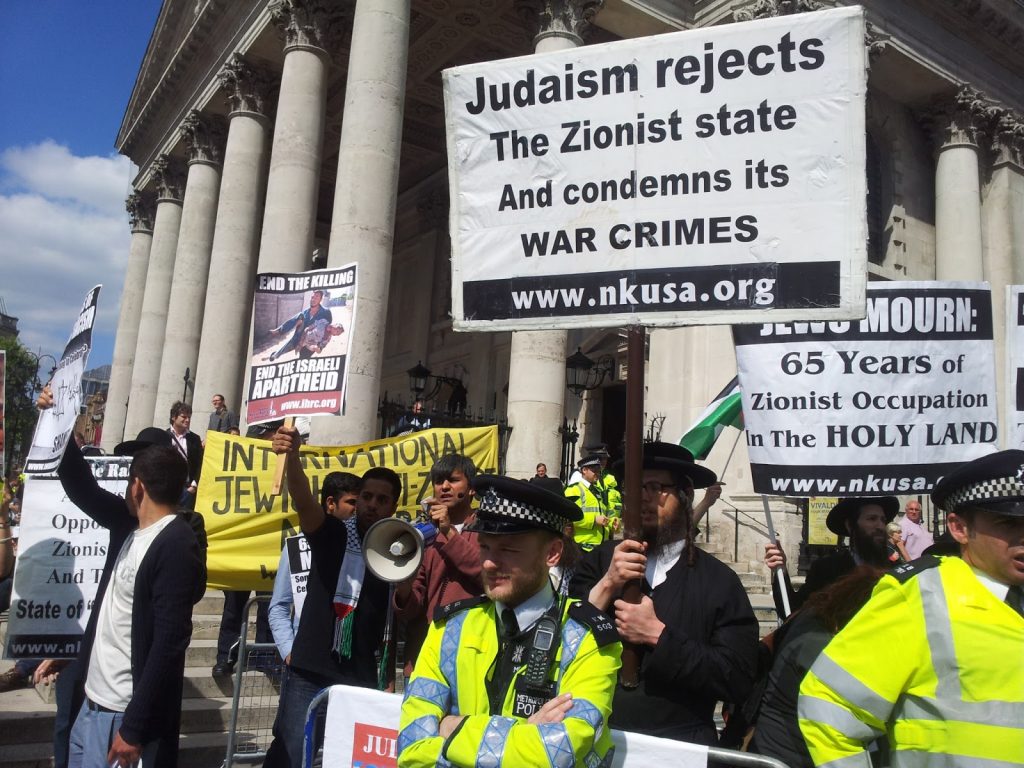 A documentary filmed on the day of Israel’s 65th Birthday Celebrations held in London’s Trafalgar Square (Closer to Israel Parade & Celebration) on 2nd June 2013, exposes an alternative narrative to Israel’s Propaganda Extravaganza.  The short film titled ‘65 Years of Ethnic Cleansing: Apartheid Israel Rebuked’ captures the viewpoints of  the public and those participating in a counter demonstration.  It also highlights some terse moments between the two opposing groups.

The counter demonstration was attended by a vast cross cultural community.  Voices appeared in unison, submitting that Israel’s formation and existence today is one of Apartheid.  There were Rabbi’s present with leaflets from the Human Rights organisation ‘Rabbis for Palestine’  which describes their struggle to include ‘Living in peace and harmony, just as in the past before Zionism came into being.’

An enlightening cultural insight was provided by a Rabbi who kindly shared his perspective:

“Across the road we have a big gathering of pro Zionists and we want to illustrate clearly that the Zionists do not represent the true Jewish people and we as loyal people to the Torah, loyal to true holy law and we are very loyal to our faith, we find it very disturbing that the world should think that these people who don’t observe the Torah and do not believe in the truth and actually a lot of them are just atheists, not believing in anything and they should be the ones representing the Jewish people, representing the Torah Nation.  That’s what disturbs us the most.

We want the whole world to hear and know the truth, that those people who are loyal to the Torah, loyal to [Gods] Law would not do any such kind of things as having an army, having a police force, occupation, murder, terror, that’s not for Jewish people.
We Jewish people say in the name of the almighty Lord, that we want peace and harmony in the world.  We want to love every human being as much as the Lord loves them.”

At this point whilst the Rabbi was speaking, a supporter of Israel’s birthday celebration attempted to drag him away, presumably so that what the Rabbi had to say could no longer be filmed.  This followed earlier assaults on Rabbi’s taking part in the counter demonstration who were spat at by Apartheid Israel supporters.  A person who witnessed one of the spitting assaults upon the Rabbi’s said:

“I witnessed a man spitting on one of the Naturei Karta protestors; a policeman grabbed the man and pulled him against the wall next to the pavement and, after speaking with him for about half a minute, released him. The policeman when questioned immediately afterwards as to why he had not arrested the attacker claimed that he had not seen him spit and had not known that he had spat.”

The second part of filming the Rabbi’s views then needed to take place in close proximity to the counter demonstration, and the Rabbi had to speak very loudly to overcome the background noise for filming purposes.

These Zionists, they want to take away our faith and have done so to thousands and thousands of Jewish people.  Unfortunately afar from true faith; what is a Jewish person without faith?  Nothing.  It is better to die a Jew with faith, then to live without faith.

We have come this afternoon to let the world know, that our biggest enemies are the Zionists.  Those who take away our faith.  Those who make us disgusting in the world, who make people think that the Jewish people are murderers, that Jewish people are political people with an army.  We are not, we do not have anything to do with these types of people they are atheists.  They don’t believe in God, they don’t believe in Ha Shem (God), they don’t believe in the Torah, they don’t believe in tradition they don’t believe in Moshiach (Messiah), they believe in nothing but their own desires, money and self, these physical desires what they want for themselves and they love blood.  We love harmony, we want peace, we cry out in the name of the Lord, we want peace with our brothers, with Islam and with all the world.  We do not want any fighting.
We oppose again and again.  They should drop the guns.  We are asking and pleading all the Israelis to drop the guns and drop all the troops and stop messing around and pretending to be powerful.  They are nothing without faith.  A Jew, it’s not right to exist without his faith.  If you have faith you go and pray and you go and study and learn the holy law and the holy Talmud and stick to your previous Rabbi’s, to the tradition we  had 2000 years and not go off the path.

They have gone off the path, they are atheists and they are not Jewish.  We want everyone to know that and the day will come when the almighty will show his glory, then we hope to be from those who the almighty will be happy with us and will be part of the harmony of the whole world when everyone will live together in one shell with love and harmony.”

His view point is interesting and relevant.  To my mind he is stating that Jewishness as an identity comes from belief in, observing and practicing Judaism.  Accordingly he contends that those ruling & supporting Apartheid Israel are not Jewish for example in their beliefs and by their conduct and thus he does not believe that they should represent the ‘Torah Nation’.   This refutes a central argument to that used by the Zionists, namely, that ‘Israel is a land for the Jews, and God gave the Jews this land – it says so in the bible – read the bible.’

Others participating in the counter demonstration also identified themselves as Jewish but made no reference to faith stating that they attended, as they wished to publicly distinguish themselves from the State of Israel.  Michael from the International Jewish Anti-Zionist Network explained:

It’s worse than that in fact because there are plenty of guest workers from Africa and East Asia who are in Israel who are treated abominably by the Israeli authorities as well.  It’s a deeply divided and racist society through and through.

We as Jewish people do not want to have any part of that, we do not support them.  They do not speak for us.”

Naomi Wimborne-Idrissi who is involved in the Boycott, Divestment and Sanctions campaign, a campaign which works towards achieving freedom, justice and equality for the Palestinians in a similar way to campaigns used to end Apartheid South Africa said, “The Zionist state was founded on the basis of exclusivity, so the Jews were going to be the ruling power.  So in that sense there is an apartheid element in there, right at the beginning.  There was never any intention to include the Palestinian’s who lived on that land in the State of Israel.”

Massoud Shadgarih, Chairman of the Islamic Human Rights Commission levied criticism towards UK institutions for allowing exclusivity to the Zionists occupying Trafalgar Square, stating that he opposes the illegal occupation and atrocities committed by the state of Israel which were being celebrated in the Square today.

Abe Hayeem an architect and founder member of Architects & Planners for Justice in Palestine discussed plight of Palestinian refugees.  In his view the solution now is for:

“Israel to stop building settlements, and to keep to international law.  Literally stop settlements, withdraw from the occupied territories, they have got to dismantle the wall, the terrible separation wall that has taken Palestinian land has got to be dismantled according to the judgment by the International Courts of Justice which said that the wall is completely illegal, the settlements are illegal.  The first steps should be to stop building settlements, to dismantle the wall and to allow the Palestinians to return to their homes.”

It is unreasonable that when the ‘Closer to Israel Parade and Celebration’ had access to and use of Trafalgar Square to mark the 65th Birthday of the State of Israel, that its supporters still felt it necessary to walk away, cross a busy main road and attempt to disrupt a counter protest which was several times smaller in comparison.  This to my mind evidences the sham of their celebration and highlights where their fear truly lies; in the voice of dissention and criticism of Apartheid Israel.  Clearly, they were not enjoying their party.

With thanks to all for their contributions.

Assalamu’alaikum, peace be upon you