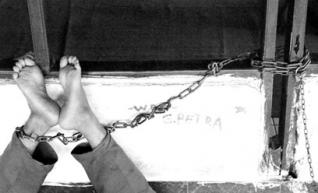 In a message released on 23 October 2009, the 22 detainees accused of belonging to the Lebanese Shi’ite group Hezbollah asserted that “state security intelligence has detained and tortured us in different ways ranging from the use of electricity on all parts of our bodies, to forcing us to stand all night, to threatening to bring our mothers, children and brothers and subject them to torture while forcing us to listen.” Arrested between December 2008 and April 2009, the detainees were taken to Egyptian State Security Intelligence (SSI) headquarters in Nasr City, Cairo, where they were tortured, coerced into forced confessions and held in incommunicado until June 2009.

“…We demand a real guarantee that the trial will be fair,” the message continues, “we want to be examined by a non-governmental medical committee to examine the major physical harms, the evidence of which continues to show on our bodies 10 months after the torture.”

This statement comes in the build-up to their hearing before the Emergency State Security Court. Due to appear before this exceptional court on 21 November 2009, the detainees fear that the main part of the evidence used against them will be from the false confessions extracted as a result of the torture described above. The message further states that court orders for release had been issued for a number of these individuals, however the authorities failed to comply with these authorities.

When they were presented before the court on 26 July 2009 to announce the transferal of their case before the Supreme State Security Court, the defendants notified the court of their incommunicado detention and of multiple incidences of serious torture but the court failed to take any action to investigate these allegations. According to the defendants, prior to appearing in court, they were threatened with further torture if they did not confirm the story given by the authorities.

Below are the names of the 22 individuals arrested between December 2008 and April 2009 as part of a group of 49 individuals accused of belonging to the Lebanese Shi’ite movement, Hezbollah. These 22 individuals were referred to the Emergency State Security court on 26 July 2009:

We are informed that the next hearing will take place on 21 November 2009. This is not the final hearing, but the court will be considering evidence against the detainees which the accused claim is mainly made up from confessions made under torture.
Due to the severity and seriousness of the detainees’ situation, Alkarama sent an urgent appeal to the Special Rapporteur on Torture on 16 November 2009 asking him to intervene with the Egyptian government in order that there an independent investigation be made into the allegations of torture, including medical examinations by an independent medical team.

The authorities’ repression of such groups can be seen as part of a growing trend of mass arrests of leaders and supporters of opposition parties, in the build-up to the 2010 Parliamentary elections.