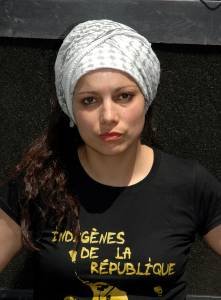 The summons is based on comments made on a French television program in which Houria used the term “souchiens,”[1] for “Français de souche”[2]. The initiative originated with the Alliance Générale contre le Racisme et pour le respect de l’Identité Française et chrétienne (Alliance against racism and for the respect of French identity and Christianity), a Toulouse-based splinter group known for taking extremist racist positions.

That the people who perpetrate the worst violence against minorities can present themselves as courageous defenders of the insulted French [white, “de souche”] is not a random fact. It is the sign of a disturbing turn of events. The undersigned declare that they support Houria Bouteldja in her rightful defense against an accusation that insults all of us.

Traduction: Karen Wirsig for the GDT.

[1] An adjective created from the noun “souche” that is a homonym of the word for underdog, “sous-chiens,” which can be used pejoratively – Translator note.