Forwarded Alert: UK – Sign the E-Petition to put Babar Ahmad on trial in the UK 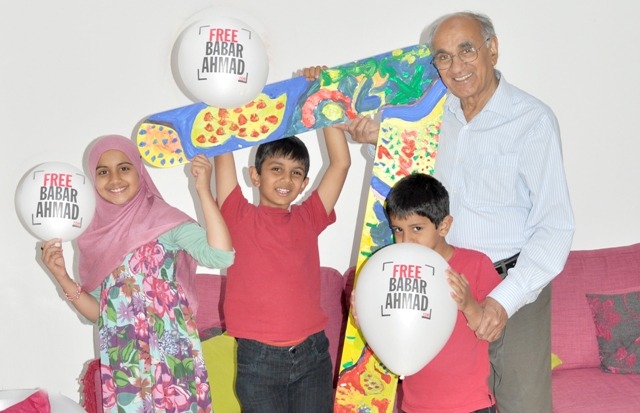 Babar, who is a British citizen, has been detained without trial in a maximum security prison for over 7 years awaiting extradition to the US.

In June 2011, the Houses of Parliament and Joint Committee on Human Rights urged the British government to amend the law so that British citizens like Babar are no longer threatened with extradition. Since all of the allegations against Babar are said to have taken place in the UK, his family are calling upon the British Government to put him on trial in the UK.

If the petition gains 100,000 signatures, the issue of placing Babar on trial in the UK will become eligible for parliamentary debate.

The petition can be signed on www.letsgetjustice.com

Babar Ahmad is a 37-year old British Muslim who has been detained in the UK for 7 years without trial, and is currently fighting extradition to the USA under the controversial Extradition Act 2003. Babar was initially arrested at his home under anti-terrorism legislation in December 2003. By the time he reached the police station, Babar had sustained at least 73 forensically recorded injuries, including bleeding in his ears and urine. He was released 6 days later without charge.

In August 2004, Babar was re-arrested by British police and taken to a maximum security prison pursuant to an extradition request from the US under the controversial Extradition Act 2003, under which there is no need to provide evidence. The US has alleged that during the 1990s, Babar had supported terrorism by operating a number of websites which were supportive of Chechen rebels fighting the Russian army. Babar denies any involvement in terrorism, and has never been given an opportunity to answer the allegations against him in a court of law. He has now been in prison for over 7 years despite not been charged in the UK.

The European Court of Human Rights is currently considering whether Babar’s extradition to the US is a breach of his human rights.

In June 2011, the Houses of Parliament, Joint Committee on Human Rights urged the British government to amend the law so that British citizens like Babar are no longer threatened with extradition.. Since all of the allegations against Babar are said to have taken place in the UK and he is a British citizen, Babar’s family have launched an e-petition on the official website of the British government calling for Babar to be put on trial in the UK. If the petition gains 100,000 signatures before 10 November 2011, the issue of placing Babar on trial in the UK will become eligible for parliamentary debate.

The petition can be signed by anyone resident in the UK. It is available for signature on www.letsgetjustice.com

For further information about Babar Ahmad and his case, please visit www.freebabarahmad.com

2.    Encourage your family and household members to sign the petition.

3.    Forward this alert to all your family, friends, colleagues and contacts, and encourage them to sign it.

5.    Download and print this petition template in order to gather signatures which can then be entered online. Please return completed sheets to IHRC at PO Box 598, Wembley, Middlesex HA9 7XH or fax to 020 8904 5183. [ENDS]