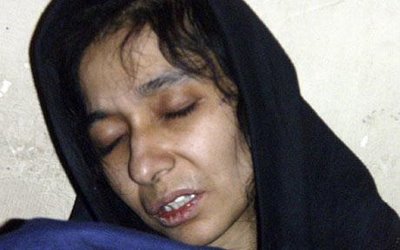 Aafia Siddiqui was born in Karachi, Pakistan on 2nd March 1972. She was one of three children of Mohammed Siddiqui, a doctor trained in England, and Ismet, her mother. She herself is a mother of three.

Having been based in Boston for a part of her life, Aafia and her family became the victims of harassment at the hands of the US authorities in a post 11th September 2001 environment when all foreign Muslims were considered suspected terrorists. During this period in the US, Aafia was the victim of domestic violence at the hands of an abusive husband. Not being able to take the profiling tactics being employed by the US authorities, Aafia’s husband moved the family back to Pakistan in 2002.

Soon after their return to Pakistan, the couple became estranged and separated from one another. In December 2002, Aafia decided to take the step of leaving her children with her family in order to work in the US. She moved to the Baltimore area where her sister was working.

In March 2003 while on a short trip back to Pakistan, Aafia Siddiqui was on her way to Karachi airport with her three children in order to catch a flight to Rawalpindi. While at the airport the family were abducted by the Pakistani authorities and taken into custody. Leaked reports to the media claimed that she was in FBI custody soon after that. Very soon afterwards the Pakistani government denied any knowledge or involvement in her disappearance.

After a year the FBI placed Aafia Siddiqui’s name on the list of seven Al Qaeda suspects. The FBI claimed that Aafia was in Liberia in 2001 buying conflict diamonds in order to help facilitate Al Qaeda operations. This was immediately picked up by her lawyer Elaine Whitfield Sharp who claimed that Aafia was in Boston the entire week that the FBI claimed she was in Liberia. Also – it was during this period that she suffered much of her domestic violence placing her nowhere near the African continent.

Aafia became one of the War on Terror’s disappeared for five years as she was held in secret detention away from any legal access or access to family.

On 7th July 2008, a press conference led by Cageprisoners patron, Yvonne Ridley, and Director, Saghir Hussain, in Pakistan resulted in mass international coverage of Aafia’s case as her disappearance was questioned by the media and political figures in Pakistan. It was on 3rd August 2008 that an agent from the FBI visited the home of her brother and told him that she was being detained in Afghanistan.

Cageprisoners believes that Aafia Siddiqui was not arrested in Afghanistan as suggested by the US, but rather was already being detained there after her abduction in 2003. This has been confirmed by Aafia herself who states she was held in Afghanistan for years and abused during her period of detention.

On Monday 4th August 2008, federal prosecutors in the US confirmed that Aafia Siddiqui was extradited to the US from Afghanistan where they allege she had been detained since mid-July 2008. The US administration claims that she was arrested by Afghani forces outside the Ghazni governor’s compound with manuals on explosives and ‘dangerous substances in sealed jars’ on her person. They further allege that whilst in custody she shot at US officers and was injured in the process.

According to her lawyer, Elaine Whitfield Sharp,

“We do know she was at Bagram for a long time. It was a long time. According to my client she was there for years and she was held in American custody; her treatment was horrendous.”

Aafia Siddiqui now faces trial in the US in circumstances that can only be described as strange at best. Questions remain as to her own whereabouts over the last five years and still that of her children.

To access her legal team Dr Aafia siddiqui has to endure humiliating full body cavity searches every single time. This means that she finds it extremely difficult to meet with her legal team which is necessary if she is to go through the US legal system in a just manner.

It is ironic how officers have been allowed to roughly manhandle Dr Aafia, in full view of the public, in the courtroom where she is to have supposedly found justice.

Whilst the physical humiliation is visible to all, her emotional and mental torture must not be forgotten. This woman does not know where her two youngest children are or have been for the past five years.

Please write to Judge Richard Berman, the US judge presiding over her case, and ask him to ensure that Dr Aafia Siddiqui is treated physically well and in a balanced and respectful manner while under his jurisdiction.

A sample letter is provided below. Model letters can be sent as they are provided or adjusted as is felt appropriate to include further information. If you receive a reply we request you to send a copy of the letter you sent and the reply you received to Cageprisoners. This is very important as it helps Cageprisoners to monitor the situation with regards to our campaigns and to improve upon the current model letters and our wider strategy. It is preferable that letters be sent via post, or otherwise by fax and/or email. All details for our offices are available at the bottom of this alert.

[YOUR NAME]
[YOUR ADDRESS]

RE: The Treatment of Dr Aafia Siddiqui

Furthermore, I am appalled by the brutal and continual strip searches this poor woman has to endure at the hands of those who are holding her in custody. So degrading is such treatment that she refuses visits and this is a major factor in her legal team being unable to mount a competent defence. I am asking you to personally intervene and use your influence to bring this primitive practice to a halt.

Dr Aafia’s case has become the focus of international attention, especially in the Muslim world, and my message to you today echoes the sentiments of the millions of those who are appalled that a woman – any woman – can be treated in such a disrespectful way. The wider implications of the case of Dr Aafia Siddiqui go far beyond your court room and in fact have everything to do with the image of the US in the world at large and the manner in which it is received outside its own borders. Please intervene and use your authority to ensure she, and in fact all women prisoners, are treated with due courtesy and respect, whilst being held in an area under your jurisdiction.

I remind you that she has as of yet been found guilty of no crime and I believe that an individual truly is innocent until proven guilty.

There is a great weight of responsibility on your shoulders, so consider deeply what has been mentioned, and ponder over what subsequent actions need to be taken for even-handedness to prevail.

I look forward to a reply from you.

Cageprisoners is a human rights NGO that exists to raise awareness of the plight of the prisoners at Guantanamo Bay and other detainees held and abused as part of the War on Terror. We aim to give a voice to the voiceless.

If you want to unsubscribe from the Cageprisoners list please send an email from your subscribed email address tounsubscribe@cageprisoners.com