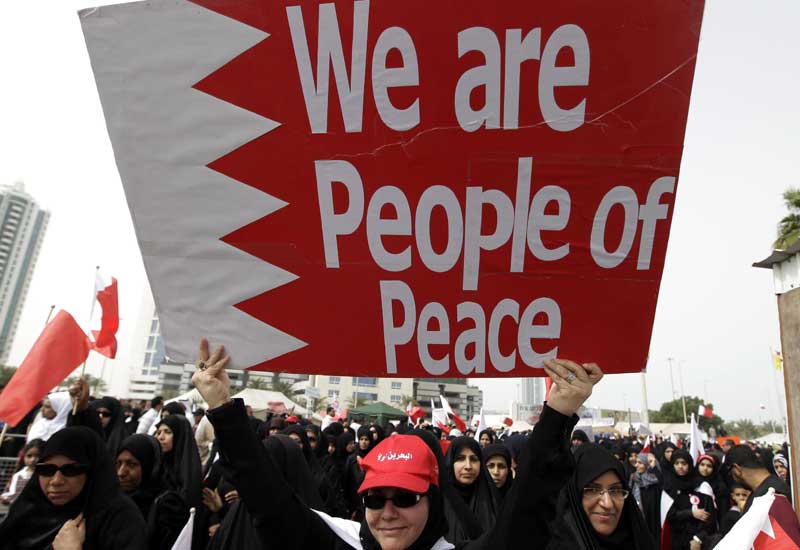 Supporting the People of Bahrain

We write with a deep plea for justice, humanity and the enforcement of the conventional rights as enlisted under the European Convention of Human Rights and the Arab Charter of Human Rights. Much governance remains at the forefront of what has been done and continues to be done so. The right to protest is an enshrined right in all democratic societies and a fundamental right that should not be eroded.

The overwhelming force as used by the Bahrain government and supported by Saudi Arabia and United Arab Emirates are of utmost disgrace.

The number of Bahraini citizens killed continues to grow as they become the targets of force, dictatorship and immorality.

We urge all parties to exercise restraint and refrain from violence. Bahrain is a state party to the UN International covenant on Civil and Political Rights and must respect and maintain the human rights of its citizens. It must cease from violating its own laws and its international obligations. Bahrain should remind itself that it is a signatory to the Convention against torture.

The behaviour of those idol countries which have stood on the by-lines is equally deplorable, there are clear hypocrisy, and self rewarded strategies shining through.

Such behaviour, as endorsed and being carried out by the Bahrain government cannot be tolerated and allowed to continue, they should respect the right to demonstrate, to investigate the wide use of violence, allegations of torture and to prosecute those who violate the rights of demonstrators. Peaceful protestors should be released immediately.

In recent days, and one month after the start of the revolution, Bahrain has witnessed a series of developments related to the popular revolution which started on February 14, 2011. The people, in very large numbers and with great bravery, have responded and taken part in the events called to by the youth groups of February 14. Despite unprecedented intimidation, threats and obstacles hundreds of thousands of people joined the march to the Royal Court on Friday and to the Safriya palace on Saturday. Both marches shared a very clear and unified demand of bringing down the regime, and both proved to be peaceful despite vicious attacks carried out by the security forces in cooperation with government thugs after the end of the march to the royal court which caused injuries to hundreds of protesters.

There has been wide spread on the ground coverage of the atrocities committed against the protesters, examples of which can be seen by accessing the following URL:

Hospitals and medical personnel have also been targeted and there have been confirmed reports of missing doctors. Dr Bahia Alaradi, a female doctor working in the main hospital in Manama, the capital of Bahrain was killed by the authorities. There are reports that confirm infiltration by government officials and army personnel into the hospitals in order to present obstacles that prevent treating injured civilians. We are asking you to sign this petition to express our anger against these atrocities.

We ask the General Medical Council to mount pressure through official means in order to boost international efforts towards ending the use of brutal force. We also call on the Bahraini government to provide protection of medical personnel and to maintain much needed urgent medical supplies.

Link of the petition: (http://www.gopetition.com/petitions/supporting-the-people-of-bahrain/sign.html )