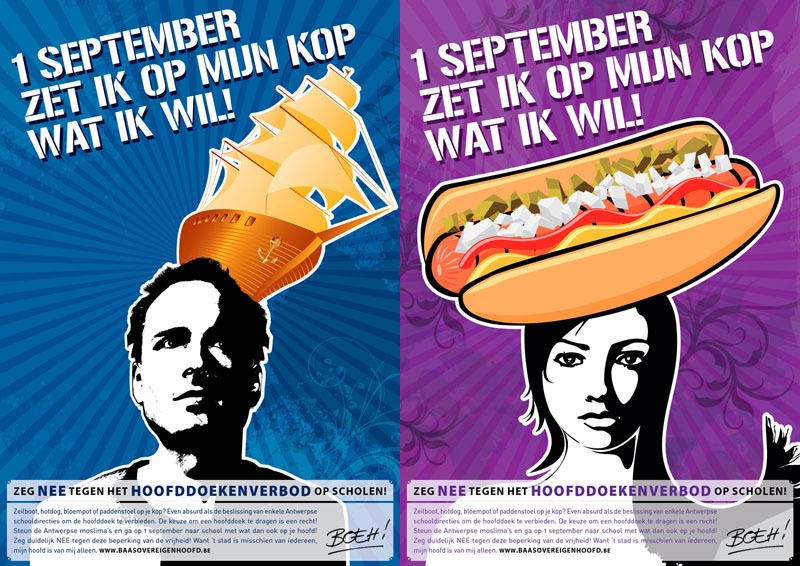 As a result of the ban on the headscarf that will be implemented as of 1 September in the public schools of Antwerp, the feminist action platform BOEH! has launched the campaign “on 1 September  I will put on my head whatever I want”.

BOEH! calls on everyone – men and women, religious or not – to put something absurd on their head on their way to work or to school. A fruit basket? Good. A Big Mac? Very well. A scale model of a sailing boat? Definitely good. The crazier, the better!

Although every single person is asked to join in, the campaign is mainly aimed at the pupils of the public schools in Antwerp who banned the headscarf in June (during the exam period). This positive action gives them the opportunity to protest and express whatever feelings they may have with regard to the ban. It also aims to bring youngsters together no matter what their ethnic, cultural or religious background, who can this way demonstrate that freedom of speech, religious freedom and freedom to develop your own identity and unique personality is important to everyone. With this action BOEH! puts personal freedom at the centre, without having to boycott schools or take other drastic measures.

Why protest against the ban on headscarves in schools?
BOEH! states that the ban on headscarves forces young women to choose between basic human rights, namely their right to education and their right to freedom of religion. A choice no one should be forced to make in a democratic society. In addition, the ban does not contribute to a harmonious and diverse society. On the contrary. An ban on headscarves teaches pupils (and citizens in general) to discriminate instead of respecting each other’s differences and living together as neighbors, coworkers, fellow pupils,… An attitude that will eventually lead to intolerance and exclusion, in this case of one specific group. We are all for promoting diversity instead of trying to turn it invisible. We are for stimulating contact between youngsters of different ethnic, cultural and religious backgrounds instead of enlarging the existing gap between them.

Therefore, BOEH! launches a campaign to criticize the unilateral decision taken by the school principals. More specifically, we want to express our disagreement with this decision and also with the way the debate on this topic has been carried out so far. Without being aggressive or provocative, but in a playful way.

Who are the women of BOEH!?

This action is an initiative of BOEH!, which stands for “Baas Over Eigen Hoofd” (literally: Boss Of your Own Head). BOEH! is an action platform that consists of a diverse group of feminists, backed by several organizations (VOK, FC Poppesnor, FMV, Minderhedenforum, AEL, SAMV, …). Together we fight against the discrimination of women, and consequently also against the discrimination of women who wear a headscarf.

BOEH! promotes a peaceful and playful way of protesting, and in so doing makes clear that this matter concerns everyone. It is about self determination, a modern and feminist principle. The goal is not to promote the headscarf. Our view is simply that everyone has the right to make their own choices. We therefore oppose both a ban as well as an enforcement of the headscarf. A ban is not a solution to the problem of women who are forced to wear a headscarf, because this is no more than one form of oppression replaced by another. Individuals, especially (young) women should have the freedom to choose how they live their religion and how they fit it into their identity, also in school.

For more information about BOEH! go to http://www.baasovereigenhoofd.be (in Dutch) or contact Maryam H’madoun (+32)0486163048 (English and Dutch interviews).[ENDS]

IHRC is not the author of the above Press Release, which has been provided solely on an informational basis. IHRC does not necessarily support the views of the author.

If you are reusing this Press Release, please cite the source.