Freedom is my Daughter’s Name 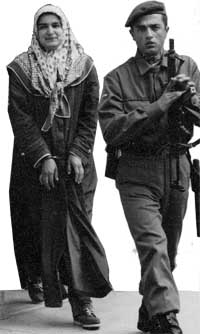 I had thought that after years working in Human Rights, I had become desensitised to horrors inflicted and suffering unlimited. Torture should have been just another research topic. Talking to Ipek Firat, the wife of a political prisoner, I was proved wrong.

Turkish prison officers use similar methods of torture as the Algerian and Iraqi security services. Electric shocks to genitalia, buggery with broken bottles, ‘water treatment’ (dousing a naked prisoner in cold water, and opening the cell windows during winter) were examples Nazat Ashik, a housewife in her fifties recounted. Her son, Mustafa, is serving a 17 year prison sentence for writing against the government. He bled from his genitalia for two months before admitting the charge. Nazat has set up an organisation to help families and prisoners in a similar situation. How many there are is unknown – no organisation can agree, even begin to fathom the numbers involved in a country where even criticising its founding dictator is treason.

In many cases prisoners remain interred long after their terms have expired. For example, Nazat recently discovered four Egyptians imprisoned twenty years ago in Bilecik, for protesting against Camp David. They should have been released two years ago. Knowledge of their existence was accidental.

Our trip to Istanbul was a paradox: a snapshot of radical Europhilia and consumerism; of

a country mired in the murders of 10,000 political opponents in ten years. We trudged around the standard sights. Orthodox monuments and retreats, the Basilica cistern, sign-posted in Latin and Slavic tongues catered for the tourist. No such considerations for our unofficial guide Rabia, a Turkish woman, one of thousands of women banned from university at the beginning of the academic year.

Rabia is articulate, intelligent and determined – a veritable heroine of a human rights epic that sweeps the nation. She is suspended from University because she is a practising Muslim. Her sporting of a headscarf has cost her dear. Her beliefs are part of an ideology dressed up in the Western psyche as fundamentalist, backward, repressive. Turkey’s oppression is however thoroughly modern.

This headscarf ban is the most strictly enforced since the coups of the 1980’s. Treason covers many ‘crimes’ and few Deans are brave enough to allow their students a choice. A daily battle of wills between students and academics, more fearful for their liberty than any ‘Islamic’ threat, has ensued. Everyday groups of students arrive at class. Everyday the police remove them. Everyday the students show their defiance by holding their own classes on the pavements outside.

I met Ipek Firat at the offices of Mazlumder, a human rights organisation with 22 branches nation-wide. We stumbled upon a writer facing jail, for his book on Kurdish orphans bereaved by security forces. The fine of 4 billion TL ($1,200) – beyond his means – was a relief. The separatist / terrorist PKK, Marx and Kurds are still an inimical part of the ruling ethic, but now bigger ‘enemies’ and bigger victims loom.

Since the1997 ruling by the National Security Council (an amalgam of politicians and generals) that Muslims were the “number one enemy of the principles of modern Turkey,” Mazlumder’s offices have been repeatedly raided. Three were recently closed down, and the organisation’s accounts frozen. Ipek was detained on a prison visit to her husband Mehmet, an alleged associate of an Islamist group. Mehmet and Ipek’s cellmate, journalist Gul Aslan were consistently tortured. Ipek was released without charge. Her husband ‘confessed’ and is now serving a fifteen and a twenty two year term consecutively. Aslan’s case hasn’t been heard after 2 and a half years. I met her in Bandirma Prison.

Behind two sets of bars and reinforced perspex, she looked far older than her 24 years. Her spirit is remarkable. Leaning aside and disappearing through four sheets of bore holed metal, she scolded me. “Don’t worry about me,” she smiled, almost smug in her passive resistance. “The fact that I’m here means they… generals, are scared…it’s only a matter of time before their rule will end.” How long will that be? In her lifetime? Conscious that her lifetime could be considerably shorter than most, she answered, “Maybe, God willing.”

This scares those in whom power resides. The Republic’s founder, known in Britain as ‘the benign dictator,’ Mustafa Kemal Pasha took on the title Ataturk – Father of the Turks. Women like Aslan, have had enough of patriarchy a la Pasha. General friendly and compliant, the mainstream media neglects to report arrests and protests unless there’s a violent photo-opportunity. The countrywide demonstrations in support of veiled students, in October 1998, saw 4 million protestors male, female, veiled and mini-skirted, hold hands. However, only a skirmish between police and protestors in Ankara, made news. Inevitably such incidents are attributed to ‘foreign’ agitation. These are never “Ataturk’s children.”

The bastardisation of women like Rabia, Ipek and Gul is backfiring. They have become the new advocates for emancipation. Akit, a well-respected, secular periodical asked: why not be like Iran? It pointed amongst others matters to UN statistics: Turkey is significantly behind in the numbers of women attending and lecturing at university; in the medical profession and the media. The Ayatollah has outstripped Ataturk. Turkey’s Islamophobia is one of its more ridiculous emulations of the Europe its Generals so desperately want to be part of. Istanbul’s elected mayor Recep Tayyip Erdogan, was prosecuted for statements purporting to cause division in society (treason once more) – he read out Ottoman poetry in public. He was sentenced last September to one year of imprisonment and a lifetime ban from all political activities, to run from the 75th anniversary of the Republic in October.

Our visit coincided with the anniversary holiday. Ataturk’s image festooned street lights in celebration. In popular imagination, he is either devil incarnate or prophet of modernity. These are not necessarily mutually exclusive. Nietzche’s last man – amoral, apolitical and above all modern, looked down from Istanbul’s lamp-posts, on his subjects. Turkey was celebrating his acceptance of civilised, European, universal ideals. And all were celebrating – government employees ensured dismissal if they did not attend the commemorative rallies. The End of History would indeed be nigh, if the West’s perception of Turkey as modernising and an (almost) democratised state had any meaning.

A crude checklist reveals the delusive success of the Enlightenment project in the (a)historic land of infidels. Turkish George Michaels and Madonnas regale on terrestrial and satellite tv. Ads for carpet shampoo and exotic nightlife purport the existence of values that conceptualise semi-naked women on billboards selling cars, and a culture of imported (female) and indigenous (tourist-oriented male) prostitution, as freedom. Ataturk’s sons and daughters can buy (into) it all. Still they resist.

Westernisation, according to author Emine Senlikoglu, means everything goes except for political opposition. She currently awaits the outcome of two cases against her for mooting an independent judiciary on air. Her first prison term was for a book on freedom of speech. Her second, was the result of answering from a conference platform, why she was imprisoned.

The Universal Declaration of Human Rights granted freedom of expression. Some rights however are less universal than others. After the Refah Party was deposed by what incoming ministers called the army’s soft-coup in 1997, Newsnight was horrified at castigation of the generals, ‘because all they tried to do was protect Turkey’s secular constitution.’ The price of that protection? A fascism that enforces the liberal ethos of Western society, without contradiction. We cannot accept the horror, unless we admit that pro-Islamists, neo-Marxists and others might just be right: the liberal ethos is as violent and oppressive as the ‘demons’ it eschews.

Aslan’s husband Tamar still suffers torture. She too was arrested on a prison-visit. Their three year old daughter sees them every two weeks. Had she been a criminal, her child could have stayed with her. Instead Tamar’s parents keep her.

“What is your daughter’s name?” I asked, as the girl ran around the visitors’ hall.

An abridged version of this article was publish in New Internationalist under the name Ataturk’s Children.