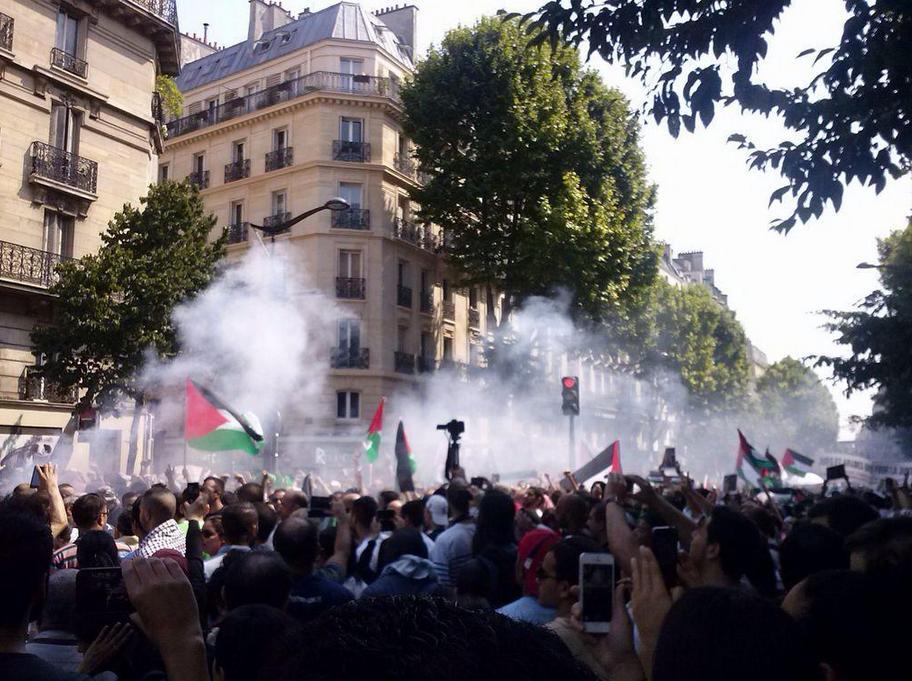 The decision by French authorities to ban pro-Palestine demonstrations in Paris marks an intensification of western opposition to the struggle for Palestinian statehood and rights, argues Faisal Bodi.

Police imposed the ban last week after thousands of protestors marched through the capital in a raucous show of solidarity with the beleaguered inhabitants of the Gaza Strip, reeling from a brutal military onslaught that has already claimed over 500 lives and injured thousands.

French police justified the ban on the grounds that they could not guarantee public safety in the wake of outbreaks of violence during a demonstration on Sunday 13 July. Initial reports, widely carried in the media, had suggested that protestors had stormed synagogues. The stories turned out to have been fabricated and are now reportedly set to be the subject of a public inquiry.

To the contrary the main victims of violence were the protestors themselves who came under attack from a counter demonstration by the extremist Jewish Defence League (JDL). Despite the JDL fighting and smashing up property in front of the police none of their number was arrested but police did take into custody six pro-Palestine demonstrators.

The faked reports of synagogue attacks and JDL violence gave police a pretext to ban a follow-on protest in the capital on Saturday 18th July. The decision received support from President Francois Hollande and also the country’s interior minister Bernard Cazeneuve who advised other cities across France to consider banning planned protests.

Anyone who turns up to an illegal demonstration now faces up to a year in prison, and a 15,000 euro fine. If they hide their faces to avoid being identified, this sentence can be increased to three years, and a 45,000 fine. Even those who publish details of an illegal rally on social media face a year in prison and a fine of up to 15,000 euros. This can be increased to seven years and a 100,000 euros fine if the postings lead to violence.

The public order grounds for the ban seem especially spurious when one takes into account the fact that it was neither large nor violent by historical standards. It is believed to be the first time in history that any western government has banned a pro-Palestinian protest.

Many pro-Palestine activists have compared the decision to Paris police’s infamous crackdown on demonstrations for Algerian independence in the 1960s. On October 17, 1961, during one of those protests, police shot over 200 protesters and buried them in mass graves.

They have also attacked the decision as being politically motivated by a desire to shield Israel from public criticism, particularly of the type that can translate into international political pressure being applied on Tel Aviv.

Until now one of the successes of the pro-Palestinian movement has been the extent to which its leaders have been able to mobilise western popular opinion behind the Palestinian struggle, in most cases in opposition to the actions and policies of their governments.

In a relatively short space of time the pro-Palestine movement has grown from a narrow leftist/Muslim hobbyhorse into a broad-based truly international endeavour encapsulating everything from boycotts of Israeli goods and services, divestment from its companies and regular aid convoys to support the residents of Gaza and the West Bank. Last weekend hundreds of thousands of demonstrators turned out all over the world to protest Israel’s ongoing oppression and occupation. In Paris, protestors defied the official ban. Police, armed with stun guns and tear gas, attacked the protestors resulting in clashes that led to 44 arrests, according to Houria Bouteldja, one of the organisers and spokeswoman for the anti-colonial and anti-racism movement Les Indigenes De La Republique.

Despite the French government’s insistence to the contrary the protest ban should be seen in the context of its historical support for the Zionist state. During the current onslaught on Gaza President Hollande telephoned Israel’s Prime Minister Benjamin Netanyahu to express “France’s solidarity with Israel in the face of rocket fire from Gaza.” The statement said, “France firmly condemns these attacks”, adding that, “Israel can take all appropriate measures to protect its people.”

In 1956, France joined Britain and Israel to attack Egypt, ostensibly to reverse the Egyptian government’s nationalisation of the Suez Canal (then under French and British control) and to neutralise Palestinian commando attacks on Israel from the Gaza Strip.

According to a recent report in the Guardian Israel’s nuclear-weapons capability, developed at the country’s nuclear plant in Dimona, owes an enormous debt to France. French engineers poured into Dimona in the 1950’s to help build Israel a nuclear reactor and a far more secret reprocessing plant capable of separating plutonium from spent reactor fuel. By the end of the 50s, there were 2,500 French citizens living in Dimona, transforming it from a village to a cosmopolitan town, complete with French lycées and streets full of Renaults.

Pro-Palestine activists have already instigated legal proceedings against the ban since there is little doubt that it is an unwarranted interference with the fundamental rights to freedom of expression and assembly enshrined in the European Convention on Human Rights. However litigation takes time and if the intention of the French authorities is to silence dissent while Israel achieves its military aims in Gaza, in the short term at least it has partially secured its objective.