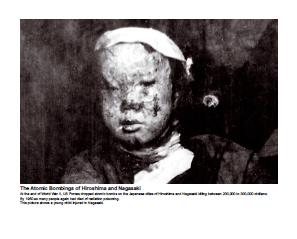 Sixty-five years ago towards the end of the Second World War, on August 6, 1945, at 8.15 a.m.[1] local time, the United States of America dropped a uranium-fuelled atom bomb (nicknamed “Little Boy”) on Hiroshima.  Between 70,000 to 80,000 people, most of them women and children, died instantaneously.  Another several hundred thousand were to die later of injuries, diseases and illnesses due to fallout and radiation[2]. Three days later, on August 9 at 11.02 a.m. local time, the U.S. dropped another – more deadly – plutonium-fuelled atom bomb (nicknamed “Fat Man”) on the port city of Nagasaki.  This time the atom bomb killed around 40,000 people instantly.  To date 269,446 people[3] have died as a result of the deployment of the two atom bombs.  All of them were civilians who were not involved in the war between Japan and the Allied forces.  Not only was this act of destruction wholly unjustified, it was at the very least a war crime and, arguably, an act of genocide.

Leading up to the first bomb, on July 26, the United States of America, the United Kingdom and the Republic of China issued a document to Japan, the Potsdam Declaration, in which they demanded unconditional surrender from the Empire of Japan.  This document gave the ultimatum that if Japan did not surrender that it would face “prompt and utter destruction”[4] with the warning, “We will not deviate from them.  There are no alternatives.  We shall brook no delay.”  On July 28, Kantaro Suzuki, the Japanese prime minister, declared at a press conference that the Potsdam Declaration was no more than a rehash of the Cairo Declaration of 1943[5] and that the government intended to ignore it[6]. Other than the allusion to “prompt and utter destruction”[4], the Japanese were given no prior warning about the deployment of atom bombs on their cities[7][8][9].

One of the main arguments for the use of the atom bomb on Hiroshima and Nagasaki was that it saved lives by ending the war quickly and by avoiding a land invasion.  By this fact alone, Americans to this day feel justified in their support for the action of Truman and his war machine. However, Truman did not have any serious discussions with the military about possible losses in a ground invasion; all such calculations have been done since the events of August 1945.  In fact, several of the U.S. military leaders were against the use of the atom bombs.  Fleet Admiral William D. Leahy, Chairman of the Joint Chiefs of Staff, is on record as having said that, “The use of this barbarous weapon at Hiroshima and Nagasaki was of no material assistance in our war against Japan. The Japanese were already defeated and ready to surrender because of the effective sea blockade and the successful bombing with conventional weapons… ”[10]

Monday August 6, 1945 was a bright and sunny morning – perfect for the deployment of a bomb, right on target.  Hiroshima was the primary target, with Kokura and Nagasaki being alternatives if the weather conditions made it difficult to sight Hiroshima.  The B-29 Enola Gay[11] aircraft was accompanied by two other B-29s – one carried instrumentation, the other was the photography aircraft[12].  At nearly 8 a.m. the Japanese called off the air raid alert, having detected only three aircrafts and assuming it must be a reconnaissance mission because the weather observation aircraft had flown over Hiroshima half an hour earlier.

The bomb was released to detonate at 1,900 ft. above ground for maximum effect, creating a fireball that reached a diameter of 1,000 ft. and a temperature of more than 3,000 degrees Celsius, followed by a deafening boom and a blast wave.  Due to a crosswind, it missed its target and detonated over Shima Surgical Clinic[13].  It created a blast equivalent to 13 kilotons of TNT.  30% of the population of Hiroshima were killed instantly, their bodies turned to black char, and another 30% injured.  Over 90% of the doctors and 93% of the nurses in Hiroshima were killed or injured[14].  Birds burst into flames and fish died in rivers and ponds.

In a matter of seconds, Hiroshima became silent to the rest of Japan. The Japanese had no idea what had happened. They sent an aircraft to find out. The aircraft arrived and circled above the city. The staff officer looked at the scarred land, the dark cloud above and the burning city in disbelief. The aircraft landed and the rescue mission began. Japan was reeling from shock and it was coping with the dead and the survivors. The number of casualties was even higher because of the lack of medical aid and the fact that there had been no warning.  Still, the Japanese government did not respond to the Potsdam Declaration; they were considering four of the conditions of surrender[15]. Only three short days later, Nagasaki was devastated in much the same way.  In fact, some survivors of the Hiroshima blast had sought aid and shelter in Nagasaki, only to be devastated by the second atom bomb[16].

The bombing of Hiroshima and Nagasaki was followed shortly by the unconditional surrender of Japan on August 15 as per the terms in the Potsdam Declaration, otherwise referred to as the Japanese Instrument of Surrender.  This heralded the end of the Pacific War and so the Second World War came to an end.

Readers should note that by the time the decision was made to deploy the atom bombs on Japanese cities, the Japan war machine had been crippled.  At the decisive Battle of the Philippine Sea and Marianas, between June 19–20, 1944, the Japanese threw all that they had at the Americans in one final attempt to defeat the American Pacific Fleet.  But having lost 476 planes and two aircraft carriers[17], their naval and air fleet were crippled and would not recover from this blow.

In addition the U.S. airforce had bombed major Japanese cities – Tokyo, Nagoya, Kobe, Osaka, Yokohama, and Kawasaki – so that 40% of these cities’ urban areas had been destroyed.  So by the time the decision was being made to bomb Hiroshima and Nagasaki, the Japanese naval and air fleets were defeated, their industrial areas were destroyed, the major cities were severely damaged, the Japanese merchant fleet was destroyed also, Japan’s war economy wrecked and the Japanese people were on the verge of starving[18].

By this time, also, the Japanese government was sending out peace feelers to a number of embassies, including those of Germany, the Soviet Union and Portugal.  Four years later, when the Potsdam papers were published, it transpired that U.S. President Truman had known about these peace feelers from intercepting Japanese communications[17].

Many notable individuals have criticised the bombings; many have described and denounced them as war crimes and even genocide.  Two early critics of the bombings were Albert Einstein and Leo Sziland, who had together spurred the first atom-bomb research in 1939 with a jointly written letter to President Roosevelt.  Szilard, who had gone on to play a major role in the Manhattan Project, in which the atom bombs were developed, argued:

“Let me say only this much to the moral issue involved: Suppose Germany had developed two bombs before we had any bombs.  And suppose Germany had dropped one bomb, say, on Rochester and the other on Buffalo, and then having run out of bombs she would have lost the war.  Can anyone doubt that we would then have defined the dropping of atomic bombs on cities as a war crime, and that we would have sentenced the Germans who were guilty of this crime to death at Nuremberg and hanged them?”[19]

A number of scientists who worked on the bomb were against its use.  Led by Dr. James Franck, seven scientists submitted a report to the Interim Committee (which advised the President) in May 1945, saying:

“If the United States were to be the first to release this new means of indiscriminate destruction upon mankind, she would sacrifice public support throughout the world, precipitate the race for armaments, and prejudice the possibility of reaching an international agreement on the future control of such weapons.”[20]

Before we consider the question of whether the atomic bombings of Hiroshima and Nagasaki were acts of genocide or not, let us consider whether they were a legitimate military action.  Given that the Japanese were defeated, their industrial centres were destroyed, their cities heavily damaged and the people facing starvation, and given that Hiroshima and Nagasaki were not military targets, we can safely say that the bombing of the two cities certainly was not a legitimate military action.  In fact, it was quite incidental that Nagasaki was a target of the atom bomb at all.  Originally, the target had been Kyoto.  But it was removed from the list by the then Secretary of War Henry Lewis Stimson because he had honeymooned there some years previously and knew of its cultural significance[21] and no doubt had fond memories of the city; Nagasaki was then substituted for Kyoto.  So if the bombing of Hiroshima and Nagasaki was not a legitimate military action, and clearly it was not, then at the very least it was a war crime. Stimson is on record as having said, “The atomic bomb was more than a weapon of mass destruction; it was a psychological weapon.”[22]

Going on to the question of genocide, we see that in Article 2 of the Convention on the Prevention and Punishment of the Crime of Genocide, the convention defines genocide as “…any of the following acts committed with intent to destroy, in whole or in part, a national, ethnical, racial or religious group, such as 1.  Killing members of the group; 2.  Causing serious bodily or mental harm to members of the group.”[23]

Clearly, the group in this case is a part of a national group: the Japanese people.  There are precedents to show that “a part” in this case is satisfied by the killing of a large proportion of the populations of Hiroshima and Nagasaki.  For example, the International Criminal Tribunal for the former Yugoslavia concluded that “The killing of members of part of a group as such located in this small geographical area”[17].
We can prove intent by simply showing that Truman knew that the Japanese were defeated and that they were sending out peace feelers, and by showing that he had not sought advice from the military leaders about the necessity of such an action to end the war.  As this act of war fits the definition of genocide in the Genocide Convention, the atomic bombing of Hiroshima and Nagasaki is therefore genocide.

The racism against and dehumanising of the Japanese people at the time of the Second World War mars this issue further. The second day after the bomb in Nagasaki, Truman stated, “The only language they seem to understand is the one we have been using to bombard them. When you have to deal with a beast you have to treat him like a beast.”[24] Caricatures depicting Japanese as less than human, e.g. monkeys, were also common in the U.S. during the war.[25]
The lack of justice with respect to the U.S. being made to pay compensation to the Japanese people (according to the Peace Treaty, the U.S. is not bound to make reparations) and, to date, the absence of even a verbal apology or statement of regret by the U.S. government (discussion forums show that Americans are emphatic that they should definitely not apologise for the bombings of Hiroshima and Nagasaki and that they have nothing to apologise for) are staggering.