Half Widows in Kashmir

Home
Briefings
Half Widows in Kashmir 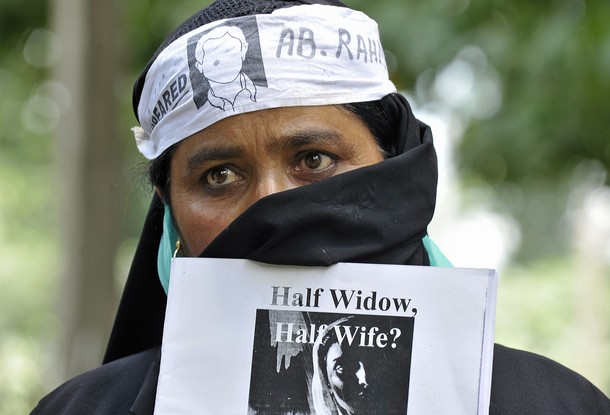 The figures for 2010/11 shows that there are more than 1500 women currently living a miserable life as their husbands are either disappeared or missing.

Fifty years ago during the Second World War, in Nazi Germany enforced disappearances were born as a practice against Jews and Communists. However, now this inhuman practice turned into a worldwide practice. In the past, only military dictatorships were known for this practice. Today, however they are commonplace under any type of political regime even under formal democracies. The phenomenon of enforced disappearances emerged in Kashmir after 1989, after the outbreak of armed conflict.

Kashmir has been subject to conflict between India and Pakistan for 22 years. It is not only a political conflict but a conflict between residents and the Indian administration. As a result of this dispute thousands of women have been left alone and helpless whose husbands have disappeared but yet have not been declared dead by the government. The phenomenon of enforced disappearances emerged in Kashmir after 1989, after the outbreak of armed conflict. A statement issued by APDA during a press conference in February 2007 said that thousands of people were asking about the fate of disappeared people in the state and according to the news reports, there are mass graves at different locations in the state, where unidentified bodies are lying and nobody knows who are buried there. ‘These mass graves are mostly located in the vicinity of various army and SOG camps. There are 25 cases since 2002, where locals, after arrest were killed and branded as foreign militants’, said the statement.

As wives of disappeared men half widows face various economic, social and emotional insecurities. It should be noted that most disappearances have occurred in rural areas, where women generally enjoy less economic and social independence. The greatest dilemma faced by the half widows is that in the absence of their bread winners they have to rely on their in laws or parents for their economic needs with their property and custody rights undetermined. Further several other economic relief such as issuance of ration cards or transfer of husband’s property or bank accounts are also close to half widows since these process require death certificate which of course half widows generally do not have as their husbands are officially not recognised as deceased. These economic hardships mostly forced these women to live life below poverty line as mostly they are not equipped, socially or educationally to begin earning for their children.

Beside the economical instability half widows suffers from the constant agony, trans-generational trauma, and post traumatic disorder. The prolonged absence of their husbands opens these women to scrutiny and policing by their society as well as threats and manipulation by those in power.

Only a small fraction of half widows choose to remarry. Many half widows do not contemplate re-marriage believing that they will eventually receive some information about their husbands. Other widows give up the option of remarriage on account of their children as there is a deeply held fear that a stepfather will never accept his wife’s children or give them his best. For those women who want to remarry unfortunately the social stigmas around remarriage in Kashmiri society remain strong while religious interpretations of the rules around remarriage, when a person has disappeared remain contested through various cultural lenses.

The trauma of disappearance of their husbands along with economic hardship and social challenges faced by half widows results in the lasting adverse effects on the lives of their children as well. These children either grow up in the insecurity that veils the lives of these women or away from their mothers in orphanages or in their grandparent’s homes. These children carry the social stigma of being ‘fatherless’ in a society where the father’s name and status is crucial to a child’s identity. After the disappearance of their father, children’s education is often suspended and they become vulnerable to exploitation.

Kashmiri half widows can easily be viewed as an example of bravery, attempting to hope against hope and despite severe economic hardship continue looking for their loved ones. According to a detailed 2007 report by the award winning Kashmir based journalist Haroon Marani ‘the primary concern of families is to find their missing person. They move from one police station to another, from one army camp to another and so on. It takes months and years.’

According to the latest APDP report approximately 70,000 people i.e. mostly civilians have been killed in the 22 year insurgency in Kashmir. The reported 8,000 to 10,000 enforced disappearances in Indian administered Kashmir are just one part of a series of human rights violations attributed to the Indian government, including extra-judicial killings, torture and illegal detentions. However, the Indian state has been able to side-step international human rights conventions through a series of laws that grant special rights to the armed forces in Kashmir. It should also be noted that currently there are 400,000 to 750,000 (exact number remain disputed) Indian military and paramilitary remain in Kashmir which eventually makes Kashmir the world’s most militarized region. APDP report further highlights the plight of women by stating that ‘with the heavy militarization in the Kashmir Valley, women have often been the targets and survivors of violence suffering from trauma, injury, and disease.’

Although due to widespread violence it is not possible to give exact statistics but by conservative estimates there are currently 1,500 half widows in Kashmir.

Half Widows and Human Rights

In international human rights law disappearance at the hands of the state have been codified as ‘enforced’ or ‘forced disappearance’ since the Vienna Declaration and Programme of Action. The International Convention for the Protection of All Persons from Enforced Disappearance adopted by UN General Assembly on 20 December 2006 states that the widespread or systematic practice of enforced disappearances constitutes a crime against humanity. Crucially, the convention provides victims’ families the right to seek reparations and to demand the truth about the disappearance of their loved ones.

Enforced disappearance in Kashmir works on two levels: not only do they silence opponents and critics of India’s policies in Kashmir but also create uncertainty and fear in the wider community, silencing others who would oppose and criticise. IHRC urges the international community and human rights organisations to urgently address the issue of enforced disappearance as it entails the violation of many fundamental human rights. For disappeared persons these include the right to liberty, the right to personal security and humane treatment (including freedom from torture) the right to fair trial, to legal counsel and to equal protection under the law, and the right of presumption of innocence among others. As a result of this inhuman practice victims’ families in particular half widows spend the rest of their lives searching for information on the disappeared. Along with the persons who are subject to disappearance, half widows should also be counted as a direct victim of this practice.

Despite its wide extent the phenomenon of disappearance in Kashmir is not officially recognised by the government as a result of which half widows and their children currently fail to receive due response and assistance. Unfortunately administrative remedies fall short of providing due relief to half widows. Although the government has created a relief system i.e. ex gratia relief and compassionate appointment, these are only available where death is certain and can be proven. In the case of legal remedies, obstruction begins for half widows during the initial search for the disappeared husband. When she approaches the police they often refuse to register a FIR (First Incident Report) as a result of which the investigation into the crime of disappearance does not commence. This failure by police authorities is systematic and undoubtedly the denial of fair trial to victim and his family.

Furthermore, the legal procedure is lengthy and daunting for half widows who often live far from cities and mostly have no formal education.

IHRC emphasises the changes in both law and policy must be made to address the concerns and issues of half widows who are silently suffering these injustices. It is not only the state government which should made required changes to its policies but New Delhi must change its policies that have significant influence on Kashmir’s administrative matters.

Theoretically, the government has to pay Rs 100,000 ($2,500) and provide employment to one family member as compensation to the kin of any civilian killed by insurgents or the security forces. However, the family of a missing person has to wait for five years before they can apply for such benefits. The government’s remedies have thus far failed to alleviate the economic hardship. It is therefore very important that a streamlined system for compensation without the room for delay, harassment or coercion must be instituted for half widows. The right to fair trial is one of the most recognised human rights. The legal system is generally overcrowded and costly which represents difficulty for half widows who are generally at an economic, social and educational disadvantage. It is therefore paramount that a special bench in Jammu and Kashmir High Court must be constituted to hear cases filed by half widows on an expedited basis. It is equally important that these benches must be committed to independent and impartial judgements.

Despite the fact that disappearances are a wide phenomenon in Indian administered Kashmir, the government of India has signed but not yet ratified the Convention for the Protection of All Persons from Enforced Disappearances. India must ratify this Convention to make it part of the Indian legal system and exhibit a true commitment to promote universal respect of human rights and fundamental freedoms.

The government must also help civil society assist half widows to document the disappearances. Half widows must also be provide assistance for legal representation, creation of income generation and psychological care.

It is also fundamentally important that the state government should take steps to establish the rule of law by punishing the perpetrators of enforced disappearance so that such future crimes can be deterred.

Without a doubt the enforced disappearances in Kashmir have created an aura of fear that weakens the families of the missing with invasive collateral damage. The common opinion of many families is that they have been deprived of all rights and means of protection. Relatives of the missing are often left in a gruelling state of uncertainty where they can neither mourn nor live with happiness. In such condition it is very important that the disappearance cases must be resolved by the state and half widows and relatives must be told about the whereabouts of their loved ones whether dead or alive.

Half widows are a stark, pernicious and unidentified face of the insecurity in Kashmir. According to APDP the unaddressed needs and lack of space for civil society action can result in vicious cycles of violence. The Indian government, the Kashmir government and Indian and in particular international civil society must act for the half widows and their children’s concerns.