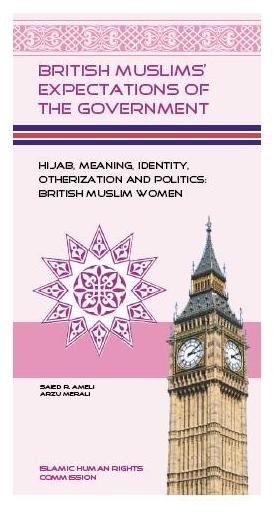 As the fourth book in a series titled “British Muslims’ Expectations of the Government,” Hijab, Meaning, Identity, Otherization and Politics: British Muslim Women summarizes findings about the value and meaning of Hijab for Muslim women in Great Britain. Saied R. Ameli and Arzu Merali’s primary concern is the lack of diverse perspectives in discussion of the Hijab. — Alyssa Beall

Click here to read the rest of the review.

The fourth report in the British Muslim Expectations of Government series has been commissioned to highlight and identify Muslim responses and requirements. It aims to record the main areas of concern in regards to Hijab. The wearing of Hijab has always been controversial, especially in a post 9/11 climate which has seen Hijab bans in both France and Turkey and the case of a British student, who was excluded from school for wearing a jilbab (full length overcoat).

This report particularly aims to voice the views of both men and women who recognize or affiliate to the concept of Hijab and to present recommendations to the government by analysing responses from a nationwide survey of 1200 Muslims, qualitative answers of 56 Muslims and 365 quantitative questionnaires from IHRC’s 2003-2004 survey entitled the ‘Hijab-Project’.

The findings in the report negate the misconception that women who wear Hijab out of choice and choose to affiliate to it, are disadvantaged. Instead, it reveals the concept of Hijab to be an identity which individuals have chosen to identify themselves by.

The Importance of Hijab

The Meaning of the Hijab for Muslims in Britain

Respondents saw Hijab to be a form of protection, identity, religious obligation and a reminder to behave in a dignified manner when in public. Other reasons cited were acting as ambassadors of Islam and as a form of Da’wah (proselytism). Sporting Hijab was attributable to modesty and respect according to some respondents. Both female and male respondents clarify that Hijab is not merely a piece of cloth but a concept which applies to both genders and symbolises the concept of modesty.

For the majority of female respondents, Hijab was worn for spiritual reasons such as obedience to God. In addition, Hijab worn out of free choice was considered a liberating experience.

The majority of the respondents felt that Hijab was a way to assert their Islamic identity and had been a positive experience, in contrast with their negative experience of discrimination at work or the anti-Muslim sentiment in social settings. However, this was overridden by the satisfaction gained by wearing the Hijab; a coherent view of emphasizing Islamic identity, through choice and intention, is recurrent in responses.

Rife stereotypes of Hijab remain encrusted in society and for the most part, blame is placed on the media, however schools, government and the behaviour of other Muslims is also blamed, which further emphasizes rampant stereotypical views.

There was a decrease in those who had not experienced being made fun of or ridiculed for being Muslim pre 9/11and an increase in such negative representation in a post 9/11 climate.

– Responses from Muslim women surveyed pre 9/11 and post 9/11 assert that there is an upsurge in Muslims being ridiculed:

-Hijab, nikaab and jilbab, as distinct Islamic dress, generated differences in experience with those who did not dress in a visibly Muslim manner.

– Regardless of respondents’ levels of affiliation to Hijab, figures of perception of Islamophobia, in the media, were relatively high, showing 62.4% of respondents believing the media’s representation to be Islamophobic.

– 14.5% of respondents, pre 9/11 had never encountered negative or insulting stereotypes of Muslims, after 9/11 this figure dropped to 4.1%

– 32.3% of respondents had never experienced being treated according to stereotype. This figure dropped to 18.9% after 9/11.

-23.3% of women surveyed, perceived themselves to be frequently treated according to stereotype. This figure rose to 44% post 9/11, from between once a month to more than once a week – a sharp rise of 21.1% – which is almost double the former figure.

As with previous findings in this series, respondents with high affiliation to Hijab have a strong sense of belonging to Britain, running counter to the notion that obvious displays of religious affiliation are equivalent to rejection of Britain or wider society.

Female respondents have shown a strong sense of belonging and willpower to maintain their Hijab and their Muslimness, regardless of possible laws or policies which could ban the Hijab.

The overall response from the findings has been that most respondents find that the government disrespects Muslims, a recurring notion in previous volumes in this series.

Subversion and the State

Of those surveyed, most considered religious values, in this case the Hijab, to be a reason for respecting British laws, as evident in the previous reports. Among respondents:

– Most women surveyed in regards to their pre and post 9/11 experiences, saw a significant increase in anti-Muslim comments from politicians. Pre 9/11, 28.2% of respondents felt they had heard such remarks once a year, this figure falling to 11.5% subsequent to 9/11.

Furthermore, 26.8% of respondents claimed they had never heard any such remarks. This figure later fell to 12.6%.

-Post 9/11 24.7% of respondents claimed to hear such comments on a monthly basis.

– A significant number of respondents made it clear that they would not be willing to compromise on wearing Hijab if policies to ban it were enforced, despite otherwise respecting the law of the land.

Hijab has been viewed as a mechanism, to control female sexuality, yet participants in this study have stated the removal of both male and female sexuality in everyday relations is necessary and therefore, they recognize Hijab to subvert the male gaze and resist objectification. Egalitarian rights talk is emphasized by respondents who feel sexuality should not be expressed in the public sphere. No participants in the survey felt the conscious wearing of Hijab as oppressive in any way, although problems were encountered, in terms of responses from family, friends, peers and wider society.

The mistaken belief that Hijab is a practice of designating inferiority and gender discrimination is overshadowed by male participants’ responses. Male respondents felt the concept of Hijab can be applied to both sexes. Although manifested in different ways (men are not obliged to cover their heads but still need to dress modestly), it was equally as important for both to observe Hijab. Hijab was seen by some men as ensuring that women could participate in wider society and not be sexually exploited.

What is the effect of wearing Hijab in the UK?

Studies have shown British Muslims to feel a sense of belonging, alongside that of rejection, which is demonstrated in experiences of wearing Hijab in Britain.

-The events of 9/11 have seen the rise of discrimination in the form of being ignored, overlooked stared at or moved away from.

Some of the Muslim women surveyed also felt there was a glass ceiling if and when they try to attain top ranking jobs.

-Some types of hostility and discrimination are prevalent in respondents’ everyday life experiences and expectations so much so that their lives are made up of this for example, in school settings, work, public transport and a variety of social arenas.

What should the government do for Muslim women wearing Hijab?

A call on the government to condemn Hijab bans in various countries.

A strong sense of individualism and collective Muslim identity is visible, as findings have shown that women are ready to stand up and object against Hijab bans. Unfortunately, negative experiences have become the norm within the lives of some Muslim women, therefore some cases of discrimination have come to be tolerated. Stereotyping, characterized by media vilification and ridicule, effects the daily lives of Muslim women in addition to the government and high profile political figures who have committed similar failings.

Recommendations to the Government

The report concludes with proposals for the government and policy makers to consider.

As the majority of respondents feel that discrimination and misconceptions are rife within society, the government must:

· Recognise – without reservation or hesitation – the religious rights of Muslim Women

· Recognising diversity and the rights of Muslim self-expression in Hijab

· Women only spaces in public places

· Showing solidarity with those who wear Hijab abroad

· Marketing and mainstreaming the Hijab

In compiling this report, 1125 quantitative and 56 qualitative surveys were conducted, documented, analysed, and presented. The quantitative questionnaire was part of a major survey carried out by IHRC and reported in the last three volumes of the British Muslims’ Expectations of the Government series. Furthermore, data from IHRC’s, 2003-2004 ‘Hijab Project’ consisting of quantitative questions from 365 women living in the UK, was explored throughout.

In summary:
·Both the qualitative and quantitative surveys were undertaken in various localities across England, Wales and Scotland.
·The diversity of Muslim ethnicities was represented across the survey.
·Respondents’ ages reflected the predominantly youthful make-up of the British Muslim community.
·Approximately 90 percent of our respondents are British citizens and 55 percent are born in Britain.
·The majority of respondents saw themselves as practicing Muslims.