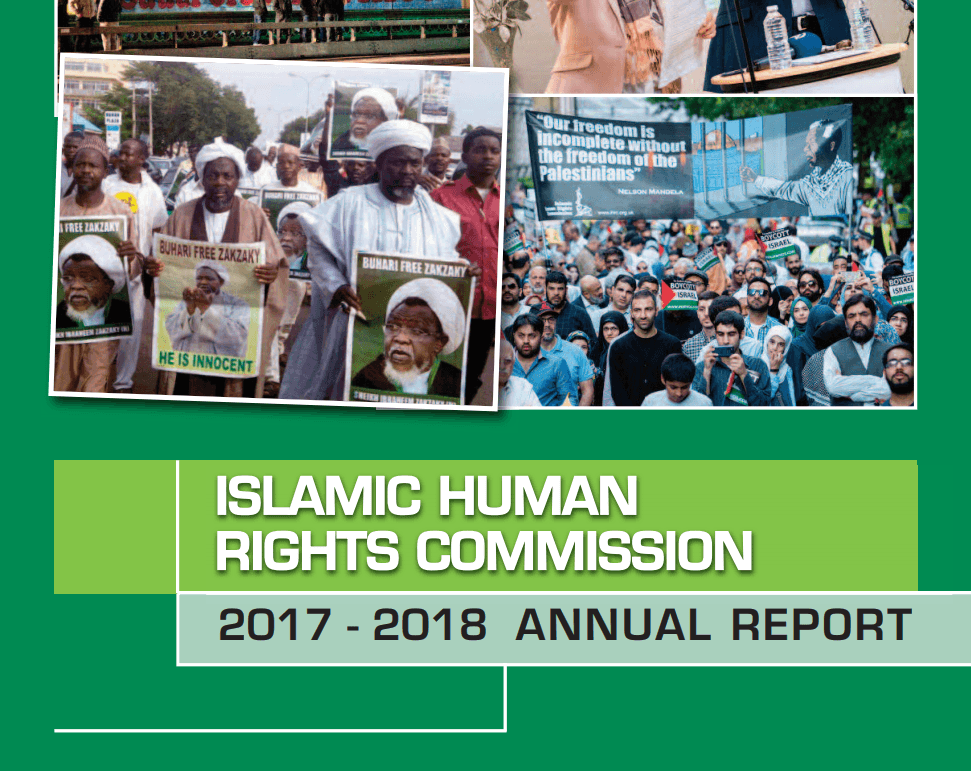 Highlights from this year includes updates on IHRC’s latest campaigns; major events held; protests planned; reports and books published and so much more.

The last year has been another challenging year for those of us who stand against all forms of injustice and racism and want to work towards creating a better and more just society for all. It is also almost a year since Darren Osborne came to London filled with hatred and the intention to kill as many Muslims as possible. He first targeted Al Quds Day and when he failed he drove his killing machine to Seven Sisters and attacked other innocent Muslims. We know now that this kind of hatred does not happen in a vacuum. This is a case of hatred being promoted through associating a peaceful demonstration (Al Quds Day was identified as such by JUDGE ASK M.C who presided over the Osborne trial) with terrorism as was done by Zionists, Pro-Israelis and Tommy Robinson. The judge specifically highlighted the way this fuelled and radicalised Darren Osborne.

This is exactly what the report ‘Environment of Hate: The New Normal for Muslims in the UK’  showcases – that politicians and the media have created and strengthened this particular environment which results in people behaving so badly and so criminally. We have always highlighted that to bring change we have to deal with institutional Islamophobia which is unleashed and perpetuated by politicians, the media and those in power

Internationally, we can see glimmers of hope of reduction in violence and moves towards a political solution in Syria and in many ways the end of Daesh in Iraq. However, we have seen no glimmers of hope in Yemen, Kashmir and Myanmar.

In the case of Palestine, the new US president outrageously tried to legitimise illegal occupied land – citing Jerusalem as not just part of the occupier but its capital. In some ways this has removed the hypocrisy from US policies. We all know the only way forward is the defeat of Zionism. In the case of South Africa, apartheid only came to an end through resistance and the result was a one state solution. It must be the same for Palestine. To that end, we would like to invite all of you to come to Al Quds Day on 10 June 2018 to stand for justice; to stand for Palestine and to stand for the integrity of Al Quds.

My dear friends, we in Britain, are facing unprecedented demonisation and Islamophobia – all part of government policy to undermine our confidence as equal citizens. A process of social engineering is taking place is taking place to undermine our beliefs and create a secular Islam. We are seeing who the government talks to when it wants to consult the so-called ‘Muslim community’: people who include secularists, those who are anti-Islam; the likes of Ex-British Muslims, etc. We have to resist this process and not allow the deen of Allah – which has come through the Prophet Muhammad (Peace Be Upon Him) – to be negotiated away at any cost. This plan of liberalising and modernising and westernising Islam has been going on for a long time. In this respect I remember a leaked government report around a decade ago which said they would bug certain Muslim schools in order to promote moderate Islam. The task was entrusted to secularists and ex-Muslims.

Asma Jahangir – UN Special Rapporteur on Freedom of Religion or Belief – said in her report on the UK in 2008:

“The Special Rapporteur would like to emphasize that it is not the Government’s role to look for the “true voices of Islam” or of any other religion or belief. Since religions or communities of belief are not homogenous entities it seems advisable to acknowledge and take into account the diversity of voices. The Special Rapporteur reiterates that the contents of a religion or belief should be defined by the worshippers themselves …”

My dear friends and supporters, we have to rise up all of the challenges above and many others too. For that we need all of your support – especially financially. Without your participation and financial support, we would not be able to fulfil – and in the future increase – our current level of work. We can and must do it together. Let us united for justice under the banner of la ilaha illallah.