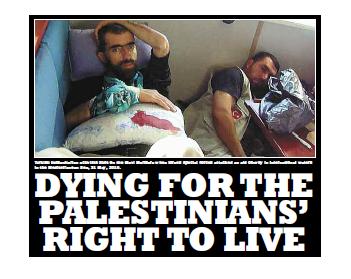 Download the IHRC’s latest newsletter from the link below…

Every Ramadan, the IHRC publishes a newsletter reporting on its work over the previous year and the progress of the organization as a whole.  This year’s newsletter is now available, for download and in hard copy format for physical distribution.

The IHRC is now more than 13 years old, and works at several different levels simultaneously: helping individuals with their problems through our advocacy team; campaigning on major issues concerning Muslims generally, such as the targeting of Muslims in the ‘war on terror’; highlighting human rights abuses around the world, from the USA and China to Egypt and Saudi Arabia; conducting research into social and political trends of particular concern, such as Islamophobia in Europe; and ensuring that Muslim concerns are heard in such forums as the UN and OSCE.

Once again this year, our lead story is based on the plight of Palestinians.  We had thought to find a different lead topic for this year, but the Israeli attack on the Mavi Marmara on 31 May, killing 9 Turkish humanitarian workers, provided the obvious peg on which to hang our message.  And that is fair enough – the status of the Palestinian struggle as the symbolic leading edge of the struggle for justice in the modern world for over half a century is indisputable.

But campaigning against Zionism and its apologists is only a part of our work.  We hope that the newsletter makes that clear, highlighting also our work against Islamophobic policies in the UK and elsewhere; the plight of little-known Muslim communities in various European countries, such as Bulgaria; the IHRC’s research and publications; and our international work, through both organizations like the UN, and other Muslim civil society groups such as the Universal Justice Network.

Finally, of course, the newsletter aims also to say something about the IHRC itself, its ethos, its objectives and its priorities.  This is reflected in the message from the Chair, Massoud Shadjareh, as well as the sections on the new building being opened in London later this year insha’Allah, and on how people can help the IHRC as volunteers, interns, or by supporting our work in other ways, such as fundraising.

Please help us distribute the newsletter this year… for free copies for your family, friends and local mosque or Islamic centre, call the IHRC office on 0208 904 4222 or email: info@ihrc.org.

And please also email links to this page to your contacts, and distribute through email lists, Facebook, etc.