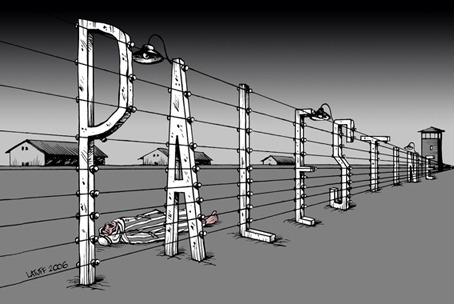 Islamic Human Rights Commission report ‘Aftermath: Gaza in the days after the 22 day war,’ which is based on field investigations of incident sites in Gaza, clearly indicates that Israeli soldiers failed to distinguish between civilians and combatants as required by the laws of war. Under the laws of war, person who carry out deliberate attacks on civilians are responsible for war crimes and possible crimes against humanity
In one case documented in the report on 29 December 2009 at 1.00 am, Israeli missile directly hit Anwar Khalil Balusha house, where he lived with his wife and five children. Five of his daughters aged 18, 14, and 11. 10 and 4 were killed.

In another case women waving white clothes and holding babies were killed when an Israeli soldier ordered them to come outside and opened fire. One of the victims of the war crime was Khalid Al Samouni, who lost his wife and two sons; one had a bullet through his temple the other through his chest.

It seems that the state of Israel and its leadership have a kind of super impunity that they enjoy which allows them to violate all international standards and laws which they wish to violate. Mr. President the situation of Palestine remains the longest unresolved issue on the UN agenda.

We urge the council that in the light of the recommendation of the fact finding mission, Israel should be held accountable for violation of laws of war. Failure to do so will undermine the credibility of the council as well as heighten suspicion about the integrity of international justice