Innocent people: The victims of western sanctions against Iran 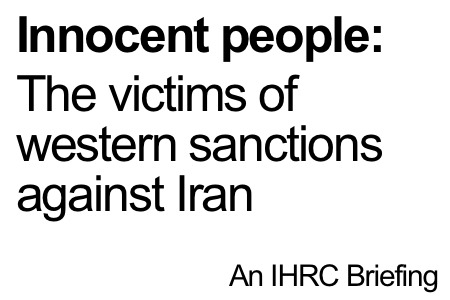 It has been many years since the government and the people of Iran were first subjected to economic and educational sanctions by the major Western powers. In the last few years these sanctions, imposed as a punishment for Iran’s development of its nuclear programme, have taken on a new intensity, targeting all trade and relations in other areas between Iran and its geographical neighbours.

Some of these sanctions, such as on the import of medicines, have failed to respect human life and are in clear violation of The Universal Declaration of Human Rights (UDHR):

“Everyone has the right to a standard of living adequate for the health and well-being of himself and of his family, including food, clothing, housing and medical care and necessary social services, and the right to security in the event of unemployment, sickness, disability, widowhood, old age or other lack of livelihood in circumstances beyond his control.”

Article 7 of the same declaration states:

In the face of vociferous, principled, objections some western officials have stated that sanctions will not affect access to medicines. However, the economic sanctions in place against the Central Bank of Iran have severely curtailed currency exchange, in turn impacting adversely on the ability to purchase medicines and medical equipment. In some cases buying has been made impossible. This is because the sanctions have removed the possibility for Iranian businesses and banks to open credit accounts in other countries. Worse still, there remain countries such as Canada, which have officially classified different Iranian pharmaceutical and medical research organisations under the category of what is to be sanctioned. [1]

2. How sanctions affect people in Iran

These sanctions have been imposed at a time when 5% of the medicines needed by patients in Iran, amounting to a value in excess of $500 million, is completely reliant on imports. These are mainly medicines related to cardiovascular, renal, haematological (like Thalassemia and haemophilia) illnesses, and oncological conditions. Multiple sclerosis medicines are also affected. The sanctions also curtail the ability to import the raw ingredients of these medicines. They continue to be applied despite the knowledge that the continuous and regular consumption of these medicines is a necessity, and even small pauses or delays can lead to irreversible damage in the patients. Statements and interviews by officials of the Iranian Haemophilia Society, The Association of Multiple Sclerosis and other NGO’s that deal with these diseases all indicate a need for an immediate solution to be found to this serious problem. [2]

As a result of a variety of coagulopathies, 8000 patients [3] with Haemophilia in Iran are in need of using coagulation factors. Close to a thousand of them are suffering from a lack of factor 9 and other sufferers of Haemophilia are suffering from a shortage of factor 11. Among the consequences of these shortages for patients is the development of Platelet diseases and the Von Willebrand disease. [4]

It is essential to point out that Haemophilia is not a curable condition and that patients are in need of a constant supply of blood factors, the failure of which will result in internal or muscular bleeding and bleeding in the joints. In such cases if the bleeding continues the affected joints will be worn down leading eventually to various types of disabilities. The lack of clotting factors also makes it impossible for surgeons to carry out operations for other disease processes.

Taking into consideration the facts mentioned above, storing appropriate amounts of coagulation factors close to treatment centres is essential. As a result of sanctions against Iran the stocks have dwindled to catastrophic levels placing the lives of thousands of sufferers nationwide in danger.

Patients with renal failure have similar continual care needs to sufferers of Haemophilia until the end of their lives. The restrictions on the import of dialysis machines as a result of sanctions have led to increased pressure on hospitals that provide dialysis.  According to statistics, 23,000 people in need of dialysis nationwide [5] are affected by these restrictions.

Additionally patients suffering from renal disease face a shortage of saline solutions because the sanctions prevent Iranian companies from purchasing the raw ingredients to enable them to manufacture the saline themselves.

According to official statistics there are 20,000 people suffering from major thalassemia in Iran. Patients with thalassemia need blood transfusions to increase the level of iron in their bodies, and are treated with a medicine known as Desferal. Desferal ensures that the ferritin in their blood does not exceed safe levels. However, as a result of restrictions on Desferal and its ingredients, sufferers of thalassemia are witnessing increased levels of ferritin. Some 15,000 patients are in danger of dying because their ferritin levels have reached dangerous levels. [6]

According to the Iranian Institute of Cancer, 400,000 Iranians currently suffer from cancer [7] and 30,000 people die as a result of cancer every year in the country. [8] The situation surrounding medicines of cancer is especially critical, so much so that the head of the Foundation for Special Diseases has stated:

‘More than anything else we are feeling constrained in the medicine for cancer and multiple sclerosis.’ [9]

Field reports also state the lack of medicine in specialised treatment centres. Doctor Shahid, who is a cancer specialist states:

‘Medicine for chemotherapy has become rare in cities and the big treatment centres in the country. Cancer patients visit this centre (Cancer Institute) every day and the doctors have no means of treating them. A few months ago medicine for cancer was supplied for free or for very minimal cost to patients. However at the moment, even by paying high prices, it is not possible to obtain these medicines. Patients come from Isfahan, Shiraz, Mashhad and other cities to the capital not knowing that medicine for chemotherapy is not available there either. [10]

Patients of multiple sclerosis are another group of patients with special needs who are under threat as a result of the western-led sanctions. MS affects 60,000 people in Iran. [11] With the appropriate treatment not readily available they face the prospect of trying to obtain medicines from unsafe routes.

2.1.6. Sanctions have led to increase in prices and lack of availability

Another impact of sanctions on the day-to-day lives of the people of Iran, especially those with illnesses, has been the devaluing of the Iranian Rial in relation to the dollar. This has led to the doubling of costs for treatments that require expensive imported medicines as they need to be bought against the doubled value of the dollar. This, along with the reduced availability of treatments, has led to people having to pay 60% more for treatment. [12]

2.1.7. Effect on patients of changing medicines

Another problem facing patients buying substitute medicines from inside the country as a result of the sanctions is that the new medicines are not always as effective as imported treatments or that they are faced with new side-effects, some of which may prove to be dangerous. The changing of medicine such as phenytoin or sodium valproate (these are used in the treatment of seizures, neurological and psychological disorders) creates the risk of relapsing disorders which had previously been brought under control.

In summary it can be said that the sanctions that have been placed on Iran in the field of medicine and treatment have resulted in increasing hardship by placing barriers on currency exchange, increasing the cost of currency exchange (as a result of having to use intermediaries) , increasing the time for acquiring important medicines,  equipment and raw materials resulting in reduction of services and access to treatment. They have also been responsible for increasing the cost of treatment, reducing the quality of service, curtailing the ability to produce medicines internally, and reducing the ability of the vulnerable to purchase treatment as a result of the deliberate devaluing of the Iranian Rial.

The lives of 500,000 patients in Iran are now under direct threat as a result of the inhuman sanctions that have been placed upon Iran from the USA, Canada  and some European countries.

While the western narrative is that the aim of sanctions is to pressure the government of Iran to halt its nuclear programme and in no way intended to harm the common man, the reality is that the sanctions aim to increase pressure on the Iranian government by squeezing the country’s people and fuelling social discontent. The restrictions on medicine and medical equipment which cannot possibly have a dual function and are solely intended for humanitarian purposes is sufficient proof that sanctions are not as targeted as is claimed.

The sanctions are similar in aim and effect to the controversial Oil for Food programme applied to Iraq in 1995. The stated aim of the West was to assist in the demilitarisation of Saddam Hussein by depriving of financial means whilst leaving open the ability of the Iraqi government to feed its own people. However the scheme led to the deaths of thousands of innocent men, women and children as many basic items were banned or delayed from being imported.

It is necessary for the people of the sanctions-applying countries to condemn the double standards of the western governments and apply pressure on their own governments to remove obstacles imposed in the area of medicine. By doing so they can become arteries of life by securing equipment and medicines that are desperately needed by the people of Iran.