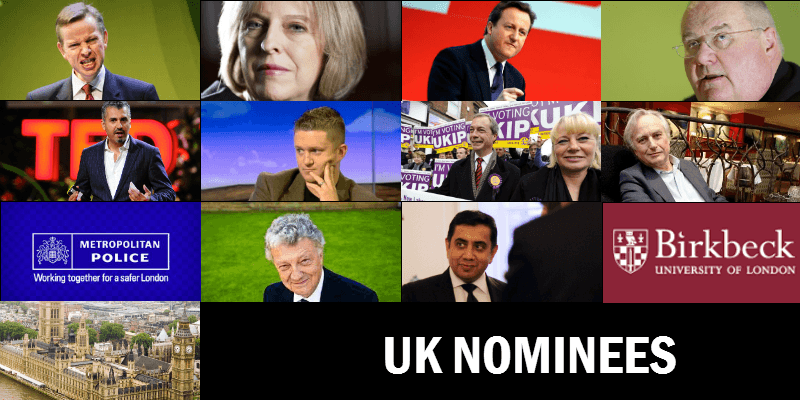 Join us for an evening of comedy mayhem as we recognise the worst Islamophobes from around the world. It’s all down to you – you nominate and vote for the worst offenders. The winners will be announced at our fundraising awards ceremony on Saturday 7 March 2015 with an additional prize awarded to the worst overall Islamophobe.

Scroll down to the bottom of the page to start voting!!!

Michael GoveÂ – For his involvement in the Trojan Horse row where he ordered investigations into several Muslim schools in the country. “Nowhere has moral clarity been more lacking in British state policy over the last ten to fifteen years than in our approach to the Islamist threat”

Theresa MayÂ – Stripping Britons of their citizenship without due process, other counter terrorism laws and the PREVENT strategy

Maajid NawazÂ – “There’s an ideological current among Muslims globally generating sympathy for the same aims as ISIL: enforcing a view of Sharia as law. I call this ideologoy Islamism”

UKIPÂÂ – Muslims are UKIP’s sworn enemies, they bring disease, Muslims have a “contempt for human life” – need we say more?

Richard Dawkins – “But, nice moderates, WHY do you stay Muslim? Give one reason? Just one?” / “People always go on about the negative side of Islam and ignore the good things about it. Yes. . . Er, what good things? Name a single one.”

Metropolitan PoliceÂ – Anti-terrorism being used as a justification for racial profiling against Asians, Blacks and people of Middle Eastern appearance

William Shawcross – “The problem of Islamist extremism is not the most widespread problem we face in terms of abuse of charities, but is potentially the most deadly. And it is, alas, growing.” More than a quarter of the statutory investigations that have been launched by the Charity Commission since April 2012 and remain open have targeted Muslim organisations

Birkbeck University – In 2014 the college bowed to Islamophobic pressure and Britain First intervention, cancelling a conference it was supposed to host – ON Islamophobia 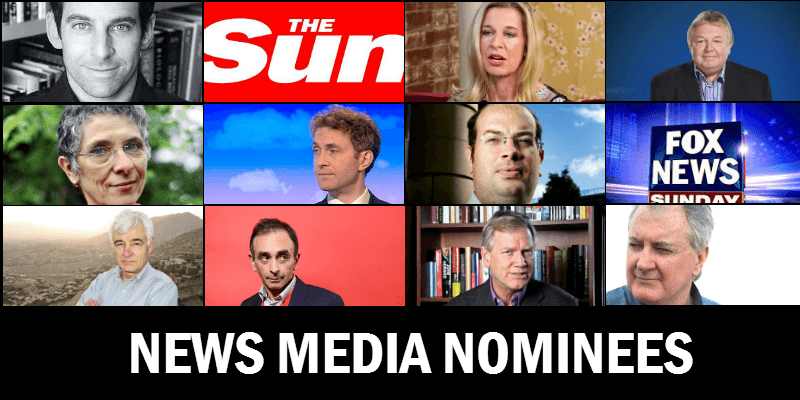 Sam Harris – “This disparity between Islam and every other religion is so obvious, in fact, that it is somehow considered a low blow to point it out. However, it remains the case that only the Muslim community reliably threatens its critics with violence—not just in the Middle East, but everywhere.” But really just about anything on his blog would suffice

Katie HopkinsÂ – just one quote of many (and by many, we mean MANY): “Don’t tell me halal meat is pre-stunned. What is Islam without inflicting maximum pain and suffering?”

Nick FerrariÂ – “for years we allowed hate-filled preachers to spread their messages of evil and unrest to vulnerable young recruits outside mosques each week with police just watching and doing nothing more than making up the numbers.”

Melanie PhillipsÂ – “Believing that Islamic terrorism is motivated by an ideology which has ‘hijacked’ and distorted Islam, it will not acknowledge the extremism within mainstream Islam itself.”

Douglas MurrayÂ – There’s been a rise in Muslim infants? Definitely a bad thing. Muslims are already awful enough without making babies too

FOX News – does there even need to be text here?

Andrew Bolt – “Australia’s top Muslim leaders have betrayed us again. Should we finally conclude the real problem is not their weakness but their faith?”

Paul Sheehan – “A de facto world war is under way and it has everything to do with Islam. It is not thousands of lone wolfs. It is not un-Islamic conduct. It involves thousands of Muslims acting on what they believe is their religious duty to subjugate non-believers, as outlined in the Koran.” 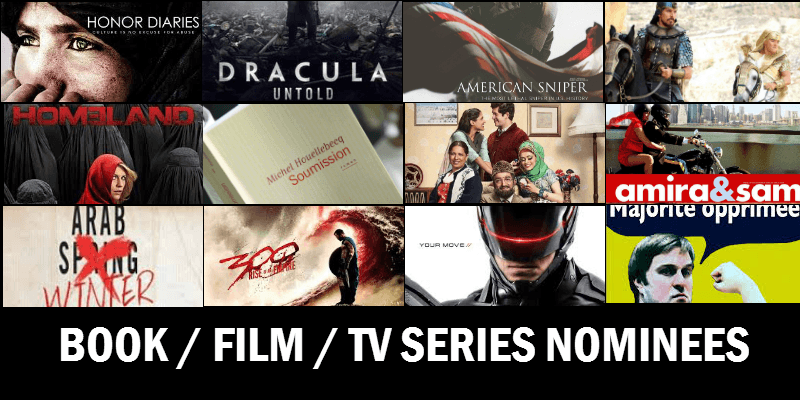 Exodus: Gods and Kings – film – racist casting because he wouldn’t be able to finance the film with an actor called “Mohammad so-and-so from such-and-such”

HomelandÂ – tv series – the television show where Muslim characters are “either terrorists, sympathizers of terrorists, or “good Muslims” which means pro-US”

Soumission by Michel Houellebecq – book – what happens when the authoritarian Muslims have a hand in ruling France? Nothing good probably

Amira & Sam – film – finally a handsome white soldier arrives to save a Muslim woman! So romantic!

Arab Winter Comes to America: The Truth About the War We’re In by Robert Spencer – book – apparently “Muslim organizations are pressuring witnesses to terror crimes not to cooperate with authorities”

300: Rise of Empire – film – Okay, misogynistic, bloodthirsty Persians drafted by badass democratic Greeks? Is there a wishful analogy here we are missing?

RoboCop – film – A broken and run down Tehran featuring a group of Iranian men and boys – they don’t want to kill any civilians, just themselves (because they’re mad suicide bombers obviously)

Oppressed Majority – film – Implies that in Islam women are subservient and submissive to their male partners. North African men are stereotyped as criminals and sexual predators 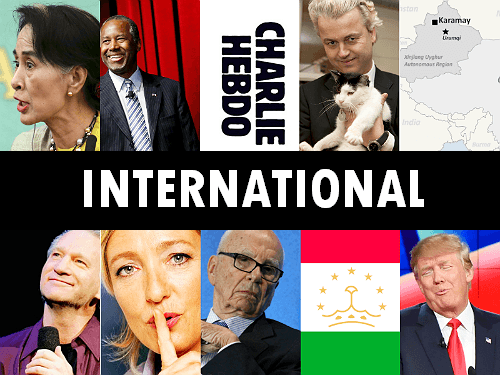 Benjamin Netanyahu – For his declared war on Palestinians

Walid Shoebat – According to him, Islamophobia is important and must be defended with the sword of truth

Rupert Murdoch – “Maybe most Moslems peaceful, but until they recognize and destroy their growing jihadist cancer they must be held responsible. Big jihadist danger looming everywhere from Philippines to Africa to Europe to US. Poltical correctness makes for denial and hypocrisy.”

Angela Merkel –”People are asking me whether one can still share this view when murderers are referring to Islam for their murders which should have nothing to do with Islam. I think that these are legitimate questions. I think it is important for religious leaders to clarify these questions.”

Bill Maher – For his consistent vilifying of all Muslims – “When there’s this many bad apples, something’s wrong with the orchard”

Charlie Hebdo – For the publication’s racist and Islamophobic journalism

Steven Emerson – “All the evil storms of history visited upon humanity did not expose to the people of Europe (who today host well-established enclaves of radical Islam in their midst) even the surface of the slaughter and injustice carried out by Muslims in the name of Islam, ‘the religion of peace,’ against Jews and Christians.” Also made claims about “no-go areas” and said that Birmingham was “totally Muslim”

Bobby Jindal – Demanded that Muslim leaders condemn the people who commit terrorism in the name of Islam as “murderers who are going to hell.”

Pat Dollard – “If there is even one more act of Muslim terrorism, it is then time for Americans to start slaughtering Muslims in the streets, all of them”