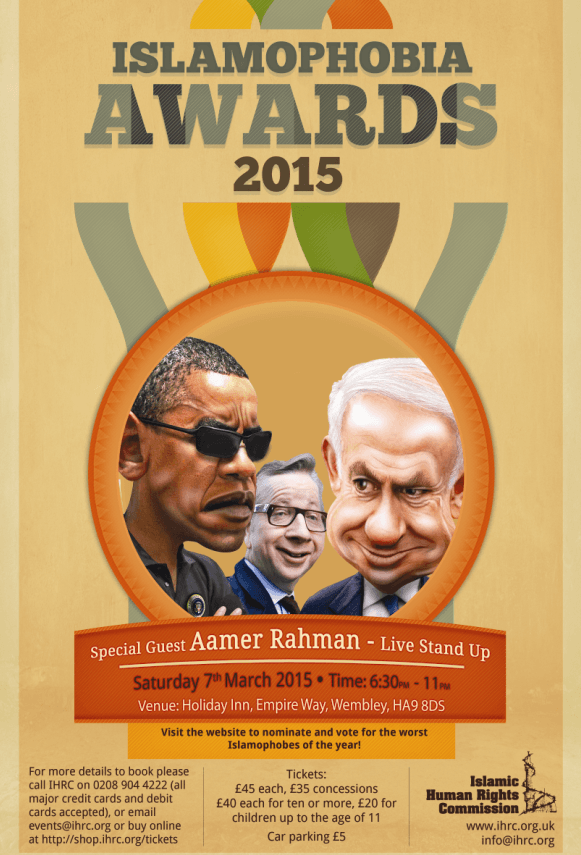 The Islamophobia Awards is an annual event to acknowledge – through satire, revue and comedy – the worst Islamophobes of the year.

This year’s event will feature the acclaimed comedian Aamer Rahman doing live stand up – Aamer was named as one of The Guardian’s top 10 comedy shows of 2014. He has performed at the Sydney Opera House and was one of the recipients of the Melbourne International Comedy Festival Best Newcomer Award.

The awards are decided upon through voting by the public. We took your nominations in but now its time for YOU to make the important decision? Who will you vote for? Let us know via twitter! Tweet @IHRC with who you’re voting for and use the hashtag #IslamophobiaAwards2015

VOTING IS NOW CLOSED. CLICK HERE FOR THE NOMINEES

A three course meal will be served and there is much mocking and satire to be had – we’re hoping you’ll join us for what is sure to be an entertaining and enlightening event!

When so much conspires together to deepen suspicions in our society and to reinforce negative stereotypes, it is crucial to have people who challenge this, wherever it appears, and to turn us back to more generous and constructive relationships. These awards are of great significance in such a task and I send my congratulations and warm greetings to all involved. – Dr Rowan Williams

The general election will be the most racist one in living memory with politicians from every mainstream party engaging in vicious scapegoating of Muslims and immigrant communities. In the student movement, we face an increasing number of hate crimes on our campuses, attacks on women’s right to wear religious dress, and a strengthening of the divisive PREVENT agenda. That’s why we must renew our efforts to stand up to Islamophobia and racism in every way, and the Islamophobia Awards 2015 provide an excellent opportunity to do that through real thought-provoking satire. – Aaron Kiely; NUS National Executive Council

The Islamophobia Awards Ceremony offered every year by IHRC is a real antidote for hypocrisy. It draws our attention to one of the most shameful realities which is going on in our global village by those who claim to be the standard bearers of morality and human rights. – Sheikh Saeed Bahmanpour

Modern Britain is in many ways a very tolerant place. But Muslims can be singled out for contempt and derision in a way that no other minority is expected to endure. Muslims can be verbally abused, spat at, and sometimes physically attacked. Crude caricatures appear in the press. There are even cases of mosques being burnt down. Yet wider British society is largely unaware of or indifferent to the problem. This is why thee Islamophobia awards are so very important. The message must get out. – Peter Oborne; Chief Political Commentator at the Daily Telegraph

The Islamophobia Awards raise awareness and also provide an understanding of what exactly the term means in today’s societal context. It’s a chance for us to say that we should not have to be victims. We’re thankful to IHRC for providing a great platform for artists – one that allows them to express themselves. We support all the work IHRC does to combat injustice around the world and the Islamophobia Awards gives us a great space to be comfortable and outspoken about these issues. – Variant Space; Art collective

Unless the aim is to bore Muslim communities to death, insults like “Go back home!” and “Terrorist!” no longer make the cut. IHRC’s Islamophobia Awards recognises the best of the best, setting a high standard for the most creative Islamophobic climate possible. – OOMK Zine