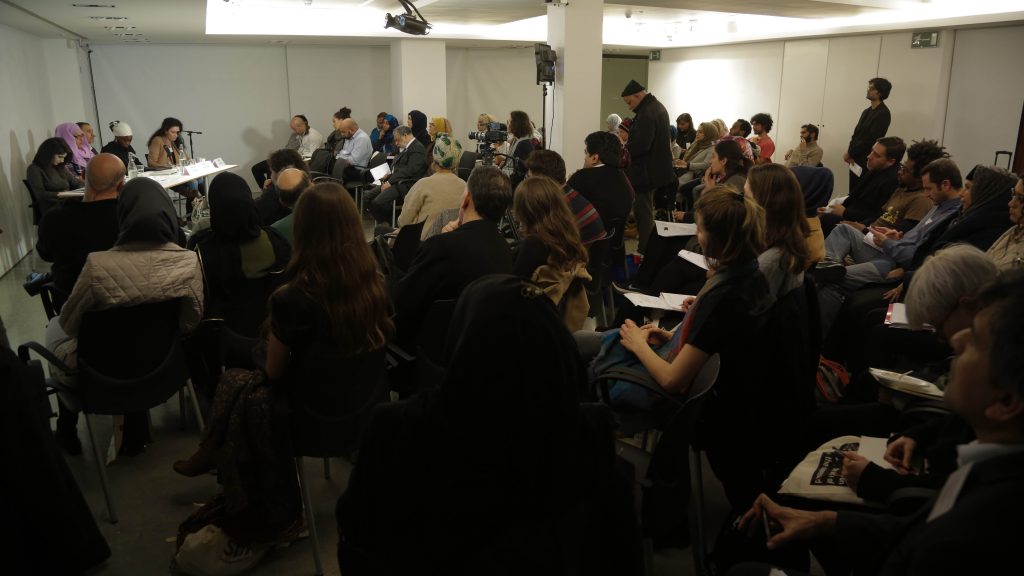 A parallel event took place in Edinburgh http://livestream.com/IndependenceLive/islamophobia, where speakers such as Salman Sayyid, Abed Choudhury and Moazzam Begg discussed the shifts in racism, the Prevent strategy and solutions for the future.

Held at the P21 Gallery, a delectable lunch was provided before Mr Massoomi opened the conference with a breathtaking recitation of a couple of verses from the Qur’an (Surah Hujarat, verses 10-13) which followed a translation by IHRC’s Lena Mohamed who also chaired the first panel. Lena provided a short introduction on the undeniable physical and material reality of Islamophobia for many Muslims, before handing it over to keynote speaker, Hatem Bazian.

Hatem drew parallels between American history and the civil rights movement, and the current climate of Islamophobia. Just as African-Americans were targeted, Muslims are facing racism and discrimination in the same way and such Islamophobia has made it possible for ‘discredited ideological groupings to reassert itself back again by saying they are defending Western values and Western society’, which is thought to be white, right-wing, Christian and exclusivist. Hatem goes on to explain Islamophobia is a codified term, synonymous with bigotry and racism.

Hatem furthers his argument through utilising Martin Luther King’s speech in 1967 on the three evils of society: war, poverty and racism; Hatem asserts these elements in relation to Islamophobia.

He begins with the unending war on terrorism, specifically with the prefixed, problematic adjective ‘Islamic terrorism’. It is thus framed as a clash of civilisations/cultures rhetoric between the West and Islam which is a clear signpost for racism. Furthermore, the resources committed to warfare are a contradictory system considering they provide and fund the Muslim world with weapons. This leads into the exacerbation of poverty as society is being deprived of much needed resources. By the same token, the political system is structured around race and racialised communities that are commoditised.ÂÂÂÂÂÂÂ  Islamophobia is increasingly being commoditised for political gains, a la Trump and Le Pen.

Next to speak was NUS Black Student’s Officer, Malia Bouattia. Malia discussed the importance of fighting Islamophobia, the anti-racist cause and how traditional anti-racist groups faltered and failed on that front so far and why it is necessary for Muslims to self-organise to collectively confront their oppression. She also asserted that organisations such as Black Students Campaign and IHRC have long fought against Islamophobia, long before the inception of Islamophobia Awareness month in 2012, and have recognised Islamophobia as an integral part of the anti-racist struggle. Yet this notion is still to gain wider acceptance. Classic racism, colonialism and white supremacy are various guises, as well as having found new expressions, in Islamophobia. Conclusively, Malia maintained Islamophobia needs to be confronted at an individual and broader level, whereby accepting with humility that Muslims should remain at the forefront of campaigning against Islamophobia.

Dr Katy Sian, senior lecturer at the University of York, discussed the inadequacies of the government’s Prevent programme, specifically vis-à-vis educational institutions. Katy denunciated the Prevent strategy and Counter-Terrorism act as a means to subjectively demonise and problematise Muslims in the political and public discourse. Young Muslims, Katy maintains, are increasingly subject to systematic forms of disciplining and regulation across British educational institutions and Muslim communities are silenced and intimidated. Katy made mention of several examples of teachers and university staff practising the Prevent programme; clocks that look like bombs, spying on 5 year old children, being interrogated for reading specific books required for modules – all of which highlight the insidiousness of Prevent.

The final speaker on this panel was Azeezat Johnson, a PhD candidate in the geography department at the University of Sheffield, examined the interventions Black feminism makes against the racist discourse presented through white feminism (link) in relation to Islamophobia, specifically ‘visibly Muslim’ women, who have become central objects of Islamophobia. Azeezat expands on the frustrating polarity of liberal white feminists’ attempts to ‘unveil’ and ‘free’ Muslim women in the Muslim world and the threat Muslim women represent if they refuse to unveil and reject the white saviour narrative. What Azeezat describes as a double role, the lived experiences of Muslim women are overlooked and they only exist in pre-defined contexts of terms: ‘victim or threat, or potentially both’. Furthermore, Azeezat explores forms of oppression, from the media and Prevent, to micro-aggressions and ends with a quote from Audre Lorde.

Panel one ended with an audience discussion where speakers addressed questions around challenges with Prevent and racism within minority communities.

After a short break, the second panel was introduced, chaired by IHRC’s Birmingham-based GMD project co-ordinator, Afroze Zaidi-Jivraj. First to speak was journalist and editor of 5Pillars news website, Roshan Muhammed Salih and he discussed strategies to deal with the media. The first strategy is to build Muslim organisations; alternative media outlets that counter the mainstream racist and Islamophobic narrative. Secondly, if one can tolerate it, Roshan advises people should get into mainstream media. Despite a few exceptions, the majority of current Muslims individuals in mainstream media are not necessarily practising Muslims and do not represent the community, in other words it is often the ‘brown man talking the white man’s lingo’. This leads to the next strategy, which is to ensure equal treatment in such broad spaces. Lastly, Roshan urged holding the mainstream media accountable – something that is recommended in IHRC’s report (Environment of Hate: The New Normal for Muslims in the UK by Saeid Reza Ameli and Arzu Merali).

Ramon Grosfoguel, a professor at the Department of Ethnic Studies at the University of California, Berkeley, discussed how Islamophobia is a multidimensional problem. The actors and interests involved in the industry of Islamophobia include the military industrial complex, the Zionist project and the Saudi monarchy, to name a few. Ramon asserted, the recognition of Islamophobia as a form of racism continues to be debated and part of the problem is the definition of racism not being properly adopted and understood. Based on Fanon’s definition of racism, racism is hinged upon structures of power and the markers of racism could be ethnicity, language, colour of skin etc. Ramon elaborated this point using a spectrum of superiority and inferiority and Fanon’s deliberation on the zone of being and non-being.

Last to speak was Arzu Merali, Head of Research at IHRC. Arzu discussed the latest report published by IHRC, ‘Environment of Hate: The New Normal for Muslims in the UK’, in which the essential argument is that the creation and perpetuation of racism and acts of hate is a result of key institutions in Westernised settings. IHRC’s projects about Muslim experiences of discrimination and hostility came out of the need to provide reliable statistics of levels anti-Muslim hate crimes. IHRC have been committed to understanding the roots of the Islamophobic rhetoric and not justifying a post-racial society. Arzu further provided statistical findings from the report and ended with an emphasis on activists and Muslim organisations to confront these fearful times in the best way possible, rather than attempting to moderately change the discourse.

The panel ended with a final audience discussion where speakers addressed issues around challenging laws, the implementation of Prevent and in-depth conversations around racism.