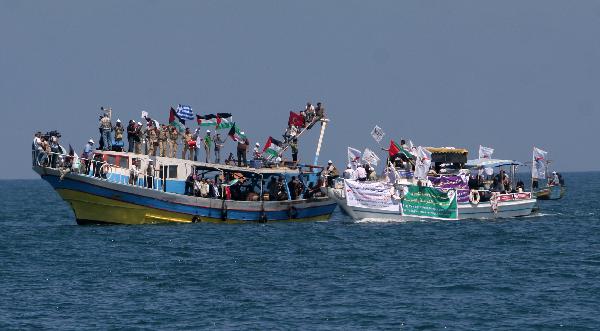 According to confirmed reports, 20 volunteers have been massacred and 60 injured by Israeli forces aboard the MAVI MARMARA, one of the convoy of 6 ships, carrying a total of 750 passengers including 35 MPs, numerous press members, artists, intellectuals, writers, representatives from NGOs, activists, women and children and 15,000 tons of humanitarian aid. One of the victims, Sheikh Raed Salah, leader of the Islamic Movement in Israel, is said to be in a critical condition.

The only South African, 25 year-old journalist, Gadija Davids of Cape Town-based Radio 786, is on board the MAVI MARMARA. Since the attack by Israeli forces in the early hours of this morning, Radio 786 has not been able to make contact with Gadija Davids or any other journalist.

Four members from Germany have joined the MAVI MARMARA, two parliamentarians, one former parliamentarian, who is also a professor in international constitutional law, and a german Palestinian. Annette Gold, Inge Ruga, Professor Norman Peusch, and Nadar Al-Sakar have had an arduous journey so far, but were in high spirits, Gadija Davids reported earlier.

The Israelis have cut all possible communications, including taking possession of all cell phones and any other communication instrumentation on board the MAVI MARMARA and have arrested all survivors.

In Turkey, people have taken to the streets to demonstrate at the Israeli Consulate. In Cape Town there are plans to picket at the FIFA STADIUM in Green Point.

Stay tuned to Radio 786 on 100.4 FM stereo for further information and updates.