Libyan revolutionaries in over their heads 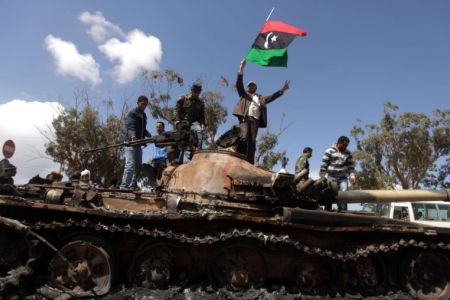 First came the EU foreign affairs supremo, then the Italian Foreign Minister, the US Assistant Secretary for the Near East, and most recently the British foreign minister. All have come bearing promises of military, economic and political support.

Meanwhile, Libya’s revolutionary leadership, the National Transitional Council (NTC), has welcomed the foreign delegations with open arms, grateful for whatever help they can get in their struggle against Muammar Gaddafi.

But it would be naïve to believe that the western delegations are helping the Libyan revolutionaries out of the goodness of their hearts. After all, these are the same people who brought us the Iraq and Afghanistan wars and who have been propping up Arab dictators for years.

It is much more likely that the West has cleverly positioned itself to reap the bonanza from a post-Gaddafi Libya. They have done this by offering the Libyan revolutionaries an instant benefit – military protection against Gaddafi’s forces and ultimate victory against them.

But there will be an inevitable payback at a later date as we all know there is no such thing as a free lunch. And that payback will come in the form of privileged access to oil reserves and to contracts to rebuild the country. And economic domination leads to political domination.

With slogans being bandied about such as “humanitarian intervention” and Gaddafi being compared to Hitler, it is sometimes difficult to distinguish the wood from the trees. So it is worth recounting just how the West has maneuvered itself into pole position in Libya.

After a genuine uprising against Gaddafi’s dictatorial rule erupted in February, Gaddafi’s forces rallied and were on the verge of retaking Libya’s second biggest city, Benghazi.
Fearing imminent defeat and possible massacre, the Libyan revolutionaries sent out appeals for help. But when none was forthcoming from Arab countries they accepted NATO’s offer in March to enforce a no-fly zone and prevent Gaddafi’s forces from entering Benghazi.

Whether this massacre would have taken place is open to argument. Those who said it would point to the fact that Gaddafi had referred to the protesters as “cockroaches” and “rats,” and had vowed to cleanse Libya house by house until the insurrection was crushed. Others say Gaddafi would have simply rounded up the main ringleaders and exercised political repression. Crimes may have been committed for sure, but it wouldn’t have been Rwanda.

Three months, thousands of deaths, and hundreds of thousands of refugees later, the National Transitional Council is heavily in debt to and wholly dependent on the West. Meanwhile, the country is in chaos, effectively divided in two parts, and with most of its institutions barely functioning.

The leader of the NTC, Mustafa Abdul Jalil, has made it clear that the nations which have helped the revolutionaries will be best placed to benefit from future contracts. And the NTC’s oil and finance minister, Ali Tarhuni, has admitted that he has held more meetings with foreign oil companies than he can count.

Meanwhile, the original “defensive” protection of civilians has developed into an offensive war to enforce regime change – making the intervention probably illegal and certainly morally questionable. The revolutionaries are now launching an offensive campaign to take Tripoli with the help of NATO, without which they would be virtually ineffective. But no one knows how much support the revolutionaries or Gaddafi really have so why are foreign powers taking sides with the intention of enforcing victory in a civil war?

I am not trying to defend Muammar Gaddafi or glorify his legacy. His human rights record speaks for itself and no one has a divine right to rule over a people for as long as he likes. But at least Libya was an independent nation under his rule and the West couldn’t set up military bases on the Libyan land or effectively steal the country’s oil.
Moreover, having spent the last three weeks in revolutionary Libya it seems pretty obvious that most ordinary people view their struggle as a jihad, and are looking forward to a representative Islamic democracy as opposed to the idiosyncratic secular dictatorship they have been used to.

But it is also obvious that the revolution’s leaders are thinking short-term and small picture instead of long-term and big picture. By opening the country to western military personnel and NGOs they are effectively mortgaging its future.

And by refusing to negotiate a political settlement that leaves Gaddafi in at least temporary control of the West, they are almost certainly prolonging war, suffering and chaos.

If the Libyan war had followed the logic of an internal dispute I am sure there would have been similar horrors and chaos to what we are witnessing now. But after it had all finished the country would have had a chance of emerging on its feet and in control of its destiny.

It would have therefore followed the logic of the Arab revolutions which have been all about throwing off the shackles of dependency and achieving independence and self-determination. But now Libya faces the real danger of being turned into a western client state.

So the end of the colonel seems nigh – the economic, political and military pressure on him is increasing by the day and he will probably last months at best. But his demise may only be the beginning of Libya’s troubles.