Lifting veil on freedom of choice

Home
IHRC in Media
Lifting veil on freedom of choice 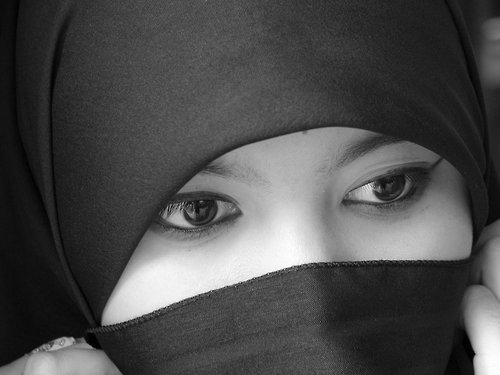 Facebook
Twitter
LinkedIn
WhatsApp
Email
Small pieces of fabric have had the ability to create a raging controversy in France. A while ago, the G-string raised government’s collective eyebrow. Singer Gwen Stefani created a fashion trend by exposing her G-string bikini on her backside above her jeans.

The trend was adopted by young women everywhere, including French schoolgirls.

Now the nikab, or face veil traditionally worn by Muslim women, is causing a flap.

“No legislation or policy was brought in to tackle this issue though. The Muslim women in France wonder how such a double standard can exist,” she says.

Merali refers to legislation that seems increasingly likely to be passed in France next month: it will ban the nikab in public, including at schools, on public transport and in hospitals.

The irony about the G-string versus the nikab is that the face veil is primarily a mechanism for promoting modesty – and there is a school of thought that believes such legislation will force Muslim women back into their homes, off streets and out of society.

“These women are saying: ‘We don’t want to be sexualised objects, why are you picking on us?’ “.

Merali believes the French government has adopted the law under the guise of feminism, of liberating the women who are forced under the veil. She says the move is racist and Islamophobic.

However Syria and other Arab countries have also banned it.

“But if we think it ‘promotes freedom’, consider the effects of the [2004] ban on headscarves in schools. These young girls have suffered post-traumatic stress syndrome, their confidence was undermined, they have been disempowered,” says Merali.
And in some cases, they simply stopped going to school.

“My worry is that as women become more disempowered, the path to education moves backwards, and the same in the workplace,” Merali said. “This is a huge blow, and one of the saddest things is how it’s covered up as emancipation.”

Rayhaanah Omar is a Muslim scholar, consultant and radio presenter who lives in Johannesburg, where the French controversy has not escaped discussion – and, indeed, has stirred outrage. She explains how misunderstood the small piece of fabric is.

“I wear the nikabevery day. It has not stopped me from schooling, studying, setting up a consulting company, being a mother or travelling abroad to lecture on the empowerment of women,” she said.

Like other women who wear the nikab and abayah, the long loose-fitting dress and hijab or headscarf, Omar does not consider her clothing a burden.

“I know I am doing this for God. I have never felt or had the need to be apologetic about it.”

Having grown up in the UK, she adds that South Africans are respectful and tolerant of different cultures.

“People are curious, they will ask sympathetically if I am hot, uncomfortable or say how they love the colour of my scarf. Some even greet me in Arabic. And they don’t associate you with terrorism,” she said.

The banning of the veil “is a backward step”. “It conveys a message that we are going back to archaic times. Liberation is not demanding that women dress a certain way.”

Khadija Randeree, a social worker from Durban, broke away from the family norm and donned her headscarf as a teenager, and later in life, her veil.

She describes her attire in loving terms, adding that even her father discouraged her use of it because of the limitations he felt she might face.

Contrary to popular belief, the traditional clothing is cool in summer and warm in winter.

“You can wear shorts and a T-shirt underneath, and it is the most comfortable, cool, thing you can wear!” said Randeree.

While the clothing looks restrictive, she even went hiking in the mountains in full dress. And if the movie Sex and the City 2 scene of a veiled woman awkwardly eating French fries comes to mind, Randeree said this is an exaggeration, and nearly irrelevant in South Africa.

“There are so many outlets for purda [where screens separate women from men not in their families]. If I am in public, all I have to do is turn the veil to the side where other men are seated. There really is no big deal to it.”

While the world sees the veil as a restriction, a caging and a hindrance, she sees it as a symbol of her femininity, a form of sunscreen from the harsh rays of the sun and a device that keeps the secret of her beauty intact.

“There is grace and wisdom underneath there [the veil]. In these times of trial, where there is so much abuse of women, how beautiful is the thought of covering ourselves and faces, with the freedom to move around without being stared at?”