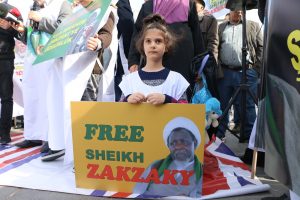 Human rights activists and supporters of the illegally detained leader of the Islamic Movement of Nigeria are to hold a protest in London today demanding his immediate evacuation from Nigeria in order to receive life-saving medical treatment.

New, more detailed examinations on the beleaguered sheikh have found that the levels of lead toxicity in his body are much higher than the critical levels previously reported.

Doctors now say that lead levels in Sheikh Zakzaky’s blood are 25% higher than originally discovered and some 45 times over the normal acceptable limit. They have also found worrying levels of cadmium in the sheikh. Cadmium toxicity affects multiple organs particularly the lungs and the gastrointestinal tract (acute toxicity) and the bones and kidneys.

Such are the levels of toxicity that the doctors have concluded that Sheikh Zakzaky is at risk of death unless he is urgently treated. With the necessary treatment not being available in Nigeria they have recommended that he be flown outside the country to a reputable medical centre.

Sheikh Ibrahim el-Zakzaky lost sight in one eye and the use of one arm after receiving four gunshot injuries during the December 2015 massacre by the Nigerian military of over 1000 followers of the Islamic Movement of Nigeria. The lead toxicity is believed to be a direct result of the shrapnel from bullets left in his body.

Since his detention supporters have sought to provide him with necessary medical help. However, Nigerian authorities have consistently prevented the sheikh from accessing his own medical treatment and have repeatedly refused requests for him to travel abroad. This is in spite of the fact that in January this year a judge presiding over the trial of Sheikh Zakzaky ordered that he should be allowed to receive medical treatment from doctors of his own choosing.