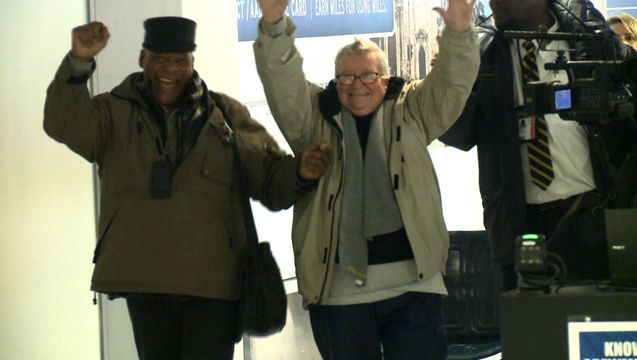 Lynne Stewarts’s decision to be a lawyer, way of being a lawyer and the struggle for her release hold many things on which we could ponder.

Firstly, she was a school librarian; pregnant with hardly any money in the bank had decided that she had to do something different to live a more meaningful life. Her partner, Ralph Poynter supported her decision without bothering how they were going to cope. He loved her and knew that she was special and had to be supported whatever the cost might be to the family.

At her university she was not brilliant as a student or a scholar. She made her mark as a lawyer of the people. Her calling was to walk in the footsteps of Prophet who held to account those in power and defended the interests of the poor, oppressed and marginalised. Lynne Stewart was hated by the establishment but recognised in the streets by ordinary people as “The Lawyer”.  That was a hard-earned recognition for someone who accepted the burden to defend her clients fearlessly and courageously and their right to be considered innocent until proven guilty in a court of law. She ran into trouble in the atmosphere of the Bush-Blair “War on Terror” where “You are either with us or against us” as her client was considered an enemy of the imperial Bush-Blair project. Lynne Stewart’s crime was that she took to heart the lesson that she had learnt from Arthur Kinoy when she was first arrested at a rally in 2002. She immediately understood when he said that these types of cases are not only won in court by lawyers but are also fought in the streets i.e. the Court of Public Opinion”. The Bush-Blair travesty was such that the lawyer who spoke in the street about her client. Because she spoke in the street therefore she was charged with aiding a terrorist. Her first crime was however, to dare to defend Sheikh Omar Abdurrahman. He was supposed to be guilty even before he ended up in court. Lynne Stewart was not even his lead attorney. However she had a track record as a barefoot lawyer.

Lynne Stewart fought a long struggle since 2005 for her release. In this regard many assisted her. A President, a constitutional lawyer had shown that he had a heart of lead. He could pardon turkeys but not a lawyer who had done nothing more than defending her client. Hence that President is worse than Bush. Of course Tony compounded things by our own intelligence agencies’ complicity in rendition to torture chambers.

Lynne Stewart’s first fight has been won. However, she has committed herself to continue the fight to the release of all political prisoners in the USA who have given their lives for causes that improve the lot of the community rather than the few. As Sheikh Omar Abdurrahman is still in prison the fight continues. There are many others from the 1960s especially Black Panther Movement activists. This is a struggle that has resonance wherever political power is exercised by whatever regime. The right to dissent is a fundamental human right. However, anyone who challenges the economic, military and political orthodoxy of neoliberalism is deemed an enemy of the state. That is a fight that needs to be continued. Where there is power there is resistance, even if it is in the shadows.

Lynne Stewart has also raised the issue of women in prison and the impact of that on their children and their families. There must be better ways for society to deal with people breaking the law. The ways in which the Scandinavian countries are dealing with imprisonment makes our own approach look rather shabby, to say the least. In the USA as here, the growth in the prison population is very attractive for the private sector. That is perhaps where part of the problem lies. The private sector cannot be interested in rehabilitation because that would put them out of business in the longer-term.

Lynne Stewart also hopes to speak to young, aspirant lawyers about what it might mean to be a lawyer. She brought courage, integrity and fearlessness back to defending her clients rather than finding ways to sweet-talk the prosecution for a deal. In the days of the “War on Terror” it is very difficult to fight some cases because neither the defendant nor the lawyer for the defence has access to all the information in the hands of the prosecution. Even the so-called lawyers with special security clearance are part of the establishment. None of them have ever faced detention without trial or trials where they, as defendants, do not have access to the whole case of the prosecution. Being a lawyer for the defence in these cases requires brains to find holes in the prosecution’s case but also it requires courage to defend the right to dissent. The Wikileaks and Snowden revelations have shown how the state reaches into the most intimate aspects of our lives. Lynne Stewart speaks truth to power. We are indeed privileged to be part of her journey.

The struggle for the release of Sheikh Omar Abdurrahman continues. If only the Ikhwan were more astute. The USA was considering his release when they were in office.

Moosa Arendt is a UK based activist and a veteran of the struggle against apartheid in South Africa.  He writes a blog for the IHRC website here.  Read more about Lynne Stewart’s case here.