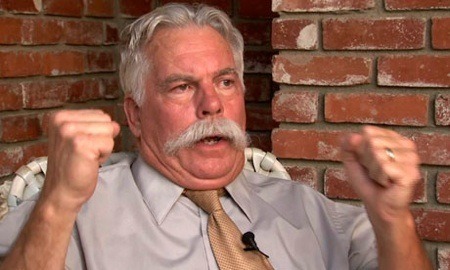 The US Ambassador to Libya, Chris Stevens, and three US diplomats were killed in attacks and rioting provoked by an obscure, low-budget anti-Muslim film called “The Innocence of Muslims.” The producer of the film is a real estate developer supposedly named “Sam Bacile” who claims to be an Israeli Jew. Bacile told the AP the film was made with $5 million raised from “100 Jewish donors.” He said he was motivated to help his native country, Israel, by exposing the evils of Islam.

While Bacile claims to be in hiding, and his identity remains murky, another character who has been publicly listed as a consultant on the film is a known anti-Muslim activist with ties to the extreme Christian right and the militia movement. He is Steve Klein, a Hemet, California based insurance salesman who claims to have led a “hunter-killer team” in Vietnam.”

Klein is a right-wing extremist who emerged from the same axis of Islamophobia that produced Anders Behring Breivik and which takes inspiration from the writings of Robert Spencer, Pamela Geller, and Daniel Pipes.

It appears Klein (or someone who shares his name and views) is an enthusiastic commenter on Geller’s website, Atlas Shrugged, where he recently complained about Mitt Romney’s “support for a Muslim state in Israel’s Heartland.” In July 2011, Spencer’s website, Jihad Watch, promoted a rally Klein organized alongside the anti-Muslim Coptic extremist Joseph Nasrallah to demand the firing of LA County Sheriff Lee Baca, whom they painted as a dupe for Hamas.

Klein is also closely affiliated with the Christian right in California, organizing resentment against all the usual targets — Muslims, homosexuals, feminists, and even Mormons. He is a board memberand founder of a group called Courageous Christians United, which promotes anti-Mormon, anti-Catholic and anti-Muslim literature (including the work of Robert Spencer) on its website. In 2002, Klein ran for the California Insurance Commissioner under the American Independent Party, an extremist fringe party linked to the militia movement, garnering a piddling 2 percent of the vote.

Klein has been closely affiliated with the Church at Kaweah, an extreme evangelical church located 70 miles southeast of Fresno that serves as a nexus of neo-Confederate, Christian Reconstructionist, and militia movement elements. The Southern Poverty Law Center produced a report on Kaweah this spring that noted Klein’s long record of activist against Muslims:

Over the past year, Johnson and the church militia have developed a relationship with Steve Klein, a longtime religious-right activist who brags about having led a “hunter killer” team as a Marine in Vietnam. Klein, who calls Islam a “penis-driven religion” and thinks Los Angeles Sheriff Lee Baca is a Muslim Brotherhood patsy, is allied with Christian activist groups across California. In 2011, as head of the Concerned Citizens for the First Amendment, he worked with the Vista, Calif.-based Christian Anti-Defamation Commission on a campaign to “arm” students with the “truth about Islam and Muhammad” — mainly by leafleting high schools with literature depicting the Prophet Mohammed as a sex-crazed pedophile.

Klein, based in Hemet, Calif., has been active in extremist movements for decades. In 1977, he founded Courageous Christians United, which now conducts “respectful confrontations” outside of abortion clinics, Mormon temples and mosques. Klein also has ties to the Minuteman movement. In 2007, he sued the city of San Clemente for ordering him to stop leafleting cars with pamphlets opposing illegal immigration.

Like many other activists who fashion themselves as “counter-Jihadists,” Klein has organized against the construction of mosques in his area. While leafleting against a planned mosque in Temecula, California, which he claimed would herald the introduction of Shariah law to the quiet suburb, Klein remarked, “It all comes down to the first amendment. I don’t care if you disagree with me. Just don’t cut off my head.”

Klein appears to be allied with the National American Coptic Assembly, a radical Islamophobic group headed by Morris Sadik. Sadik claims to have discovered the film and began promoting it online. Once it went viral, the trailer was translated into Arabic, sparking outrage in the Middle East, and ultimately, to the deadly attacks carried out by Muslim extremists today.

Klein claims credit for inspiring “Sam Bacile” to produce “The Innocence of Muslims,” promising him he would be “the next Theo Van Gogh,” referring to the Dutch columnist who was murdered by a Muslim extremist. Of the attacks in Libya, Klein said, “We went into this knowing this was probably going to happen.”

First published by Max Blumenthal on 9 September 2012 at maxblumenthal.com