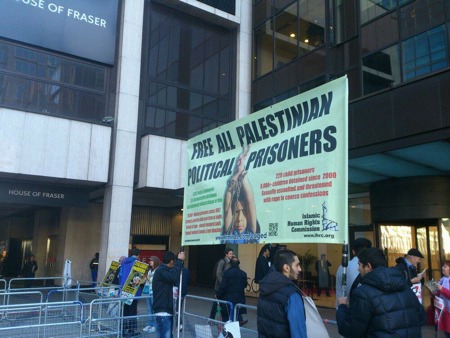 IHRC activists entered the building, managed to bypass security and hand a letter addressed to the CEO Nick Buckles into the G4S reception.  The largest security company in the world failed to stop IHRC activists getting access to the building and offices.
IHRC along with Inminds had organised a vigil outside the G4S headquarters in London, against their provision of expertise and security systems to Israeli prisons and interrogation centres. These prisons have housed thousands of Palestinian men, women and children detained without charge – many of whom have been tortured.
Among some of the provisions made by G4S to the Israeli security apparatus include a perimeter defence system and command control centre for Ofer prison in occupied Palestine, and security systems for the al-Jalame interrogation centre in Israel.
The demonstration is part of an ongoing campaign by IHRC and Inminds against Israeli apartheid.
IHRC and Inminds will be organising another vigil against G4S on 9th November, 2:30- 4:00 pm, outside the G4S headquarters, Southside, 105 Victoria Street, London SW1E 6QT