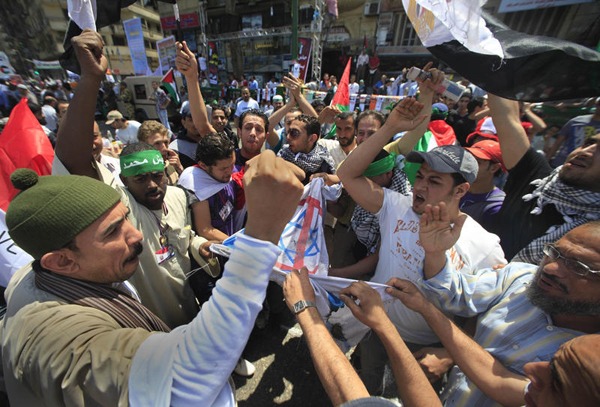 Nearly a thousand Gaza Freedom Marchers, representing 42 different nationalities, brought the Egyptian capital to a standstill at one point when they sat down on a main road in Tahrir Square. The surprise demonstration took Cairo police by surprise after they blockaded a hotel nearby where nearly 30 of the GFM were staying. Around 700 maintained their sit-in for 20 minutes until police reinforcements arrived to remove the defiant peace activists who were chanting: “We want to march to Gaza.” Mick Napier, the chair of the Scottish Palestine Solidarity Campaign said: “The police used excessive force and at one stage several female protestors were punched and kicked. A couple had their hijabs ripped away from their head. “Many of us were taken aback by the naked aggression of the police as this was a non-violent protest. Around 1400 of us arrived in Cairo a few days ago to go to Gaza but a travel ban was imposed and we’ve been stuck in the capital.”