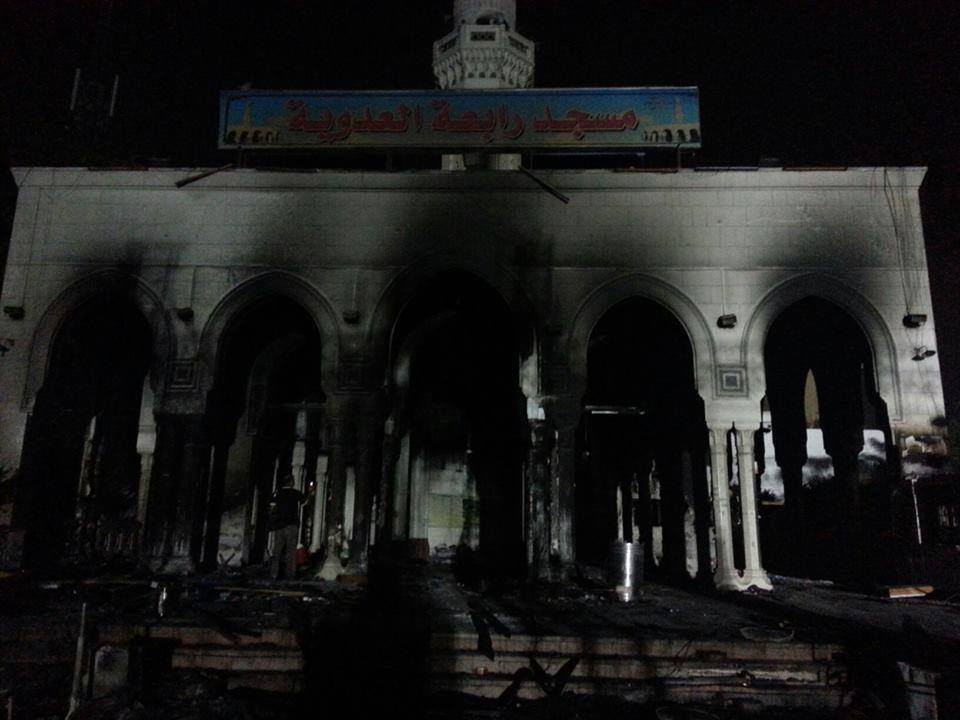 Egypt’s Muslim Brotherhood said it would bring down the “military coup” and remained committed to peaceful activism.

“We will always be non-violent and peaceful. We remain strong, defiant and resolved,” Brotherhood spokesman Gehad El-Haddad wrote on his Twitter feed.

“We will push (forward) until we bring down this military coup,” he added.

Egypt remains under a state of emergency following widespread violence and hundreds of deaths in cities across the country yesterday.

An unconfirmed number of people died when authorities forcibly broke up camps of supporters of former president Mohammed Mursi.

Islamists clashed with police and troops who used bulldozers, teargas and live fire to clear out two Cairo sit-ins that had become a hub of Muslim Brotherhood resistance to the military.
The clashes spread quickly, and a health ministry official said about 300 people were killed and more than 2,000 injured in fighting in Cairo, Alexandria and numerous towns and cities.
The crackdown defied Western appeals for restraint and a peaceful, negotiated settlement to Egypt’s political stand-off.

The Muslim Brotherhood said the true death toll was far higher, with a spokesman saying 2,000 people had been killed in a “massacre.”

It was impossible to verify the figures independently given the extent of the violence.
Two journalists were killed in Cairo during the violence.

The military-installed government declared a month-long state of emergency and imposed a dusk-to-dawn curfew on Cairo and ten other provinces.

It also restored to the army powers of arrest and indefinite detention it held for decades until the fall of Hosni Mubarak in a 2011 popular uprising.

The army insists it does not seek power and acted in response to mass demonstrations calling for Mr Mursi’s removal.

Vice President Mohamed ElBaradei, a Nobel Peace Prize winner who lent liberal political support to the ousting of Egypt’s first freely elected president, resigned in dismay at the use force instead of a negotiated end to the six-week stand-off.

“It has become difficult for me to continue bearing responsibility for decisions that I do not agree with and whose consequences I fear. I cannot bear the responsibility for one drop of blood,” Mr ElBaradei said.
Interim Prime Minister defends action

Interim Prime Minister Hazem el-Beblawi spoke in a televised address of a “difficult day for Egypt” but said the government had no choice but to order the crackdown to prevent anarchy spreading.

Churches were attacked in the Nile Valley towns of Minya, Sohag and Assiut, where Christians escaped across the roof into a neighbouring building after a mob surrounded and hurled bricks at their place of worship, state news agency MENA said.

The United States, the European Union, the United Nations and fellow Muslim power Turkey condemned the violence and called for the lifting of the state of emergency and an inclusive political solution to Egypt’s crisis.

Chairman of the Islamic Human Rights Commission Massoud Shadjareh has criticised the international community’s response to events in Egypt as “too little too late”.

Mr Shadjareh was critical of the fact that what he described as an “American-backed military” deposing democratically elected representatives.

He said that this was not “the road to democracy”, regardless of how good or bad those politicians were.

Mr Shadjareh said that it had also been reported that Saudia Arabia had given $1 billion to the Egyptian Military ahead of the ousting of Mr Mursi.

He also said that some authoritarian regimes in the region were benefitting from the unrest in Egypt, which he said was seen as stifling democracy.

The Brotherhood publicly rejected any plan that did not involve Mr Mursi’s restoration to office.
In Cairo, police and soldiers aided by self-styled “popular committees” of civilian vigilantes armed with clubs and machetes enforced the curfew, searching cars and checking identity cards of people passing through makeshift checkpoints made of tires and concrete blocks.
Despite the lockdown, hundreds of Mursi supporters tried to gather at El Iman mosque in the Cairo neighbourhood of Nasr City in an attempt to start a new sit-in to replace the main camp dispersed at nearby Rabaa al-Adawiya square, MENA reported.

Egyptian state television broadcast aerial footage of the burning remains of sprawling tent cities, as well as images of handmade guns it said were found at the sites. It also showed some video of alleged armed protesters shooting at police.

Interior Minister Mohamed Ibrahim told a news conference 43 members of the police force were killed in the clashes.

He vowed to restore Mubarak-era security after announcing, in a statement last month, the return of notorious political police departments that had been scrapped after the 2011 revolution.

Yesterday’s death toll took the number of people killed in political violence since Mursi’s fall to about 600, mostly Islamist supporters of the ousted president.