Netanyahu: Does Palestine have the right to exist?

Home
Comment
Netanyahu: Does Palestine have the right to exist? 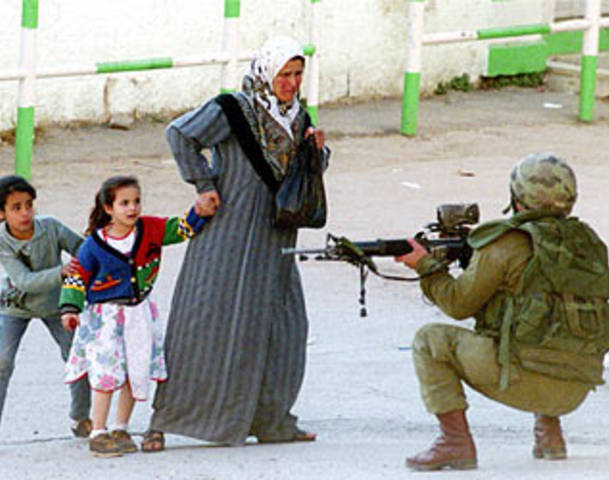 For decades defenders of the Palestinian peoples right to establish a state of their own have had to face the inevitable question that is raised by defenders of the Israeli state that occupies Palestinian land. That question is: “Does Israel Have The Right To Exist”? This question is the official line of the Israeli state whenever they are criticized for excessive and disproportionate military responses to Palestinian resistance. Even nonviolence and passive means of resistance are met with a violent response from the Israeli military such as the brutal massacre on May 31st of peaceful activists attempting to deliver much needed aid to the besieged and blockaded Gaza Strip. 9 unarmed activists were murdered and dozens others injured when Israeli commandos seized and diverted to an Israeli port 4 ships destined for the Gaza Strip by the Free Gaza Movement. To justify this massacre, Israeli Prime Minister Netanyahu stated Israel was within its right to defend itself.

Israel in asserting its right to defend itself and by framing its battle to occupy and permanently settle Palestinian land as an existential decision has gone to the extreme in attempting to crush the Palestinian resistance. The disproportionate and excessive military actions by Israel and the silence of the international community, in particular the United States begs us to ask the question of Israel and that is “Do The Palestinian People Have The Right To Exist!”

lf we were to base a response to that question from the actions of Israel and the United States the past couple years the answer would be a resounding No! If we also base the response to that question on Israel’s treatment of the Palestinian people and humanitarian activists in the occupied territory the answer would be another resounding No! Israel’s recent actions towards the Palestinian people reveal a deep seeded disregard for the value of Palestinian life. In 2008, in an alleged response to the tiring of homemade rockets into Israel from the Gaza Strip, the Israeli military launched Operation Cast Lead which was a massive bombardment from land, sea and air of the Gaza Strip. In addition to murdering over 1,300 Palestinians, the vast majority civilian, the infrastructure of Gaza city was destroyed. Vital infrastructure like bridges, water purification plants, electric power grids, major highways and human services buildings were deliberately targeted by the Israeli military. When the international community finally had to express concern over the disproportionate violence imposed by the Israeli military on Gaza the Israeli Foreign Minister responded that the violence is deliberately disproportionate because they want the Palestinian people of Gaza to think twice about supporting militants who fire rockets into Israel. For clarification, two Israeli civilians were killed in the dozens of rocket attacks from the Gaza Strip. Another 18 Israeli soldiers died in the fighting involved in the operation. 11 of the soldiers were killed by “friendly tire” from an Israeli tank that mistook them for Palestinian fighters. A total of 1,300 Palestinians died.

The deliberate infliction of disproportionate military action upon a civilian population is a violation of the Geneva Conventions governing war and the use of force. A military commander or a national leader that orders this course of action can be charged as a war criminal yet despite the Israeli Foreign Minister stating that Israel was deliberately using disproportionate force there have been no calls to hold Israeli leaders accountable for the massacre of Palestinian civilians during Operation Cast Lead. To add even more suffering to the people of Gaza Israel prevents Gazans from importing into the Gaza Strip the humanitarian aid that is necessary to rebuild Gaza.

It must be noted that although Israel used the firing of homemade rockets into Israel by militants in the Gaza Strip as a reason for Operation Cast Lead that was only a pretext for the real reason Operation Cast Lead was launched. Operation Cast Lead was launched as a punishment toward the Palestinian people for electing a government of their own choosing in 2006, a election that the Palestinian resistance movement Hamas won convincingly despite efforts by the Israeli’s and United States to undermine Hamas chances at victory. The United Nations and independent observers all agreed that the election was free and fair, immediately following the election Israel, with the consent of the United States, initiated a campaign of collective punishment against the Palestinian people for exercising their right to vote for leaders of their own choosing, a right that is recognized as inherent in the Universal Declaration of Human Rights. It is ironic that the United States, which considers itself the defender of democracy, supports Israel’s decision to collectively punish the Palestinian people for participating in a democratic election that is regarded as the first real free election in the Middle East.

Israel claims that it is within its right to blockade the Gaza Strip and undermine the democratically elected Palestinian government of Hamas because Hamas refuses to recognize Israel’s right to exist and refuses to renounce violence as a means of resistance to Israeli occupation of Palestinian land. Why should Hamas do this? Hamas does not threaten Israel’s existence however Israel threatens the existence of Palestine. Hamas does not threaten to cleanse Israelis from their homes yet Israel has implanted hundreds of thousands of settlers on Palestinian lands and purses a government policy of ethnically cleansing Palestinians from fertile land in the occupied territory. It is Israel that has built massive walls sealing off Palestinians from their ancestral lands and making it impossible for Palestinians to travel freely on their own lands. It is right for Hamas to ask the question of Israel :”Does Israel Recognize Pa1estine’s Right To Exist”? Based on Israel’s behavior toward the Palestinian people why should Hamas have to recognize Israel’s right to exist? Also Hamas is not required to renounce armed struggle as a means of resistance. Resistance to occupation is recognized under international law. That is not a defense of Hamas, for Hamas has demonstrated they can defend themselves. This is a matter of right or wrong.

While Israel may have adopted Apartheid’s playbook they obviously haven’t paid attention to history or are ignoring it. Occupation cannot be sustained and the days of turning a blind eye to settler states is over. The Palestinians will not stop fighting and activist and good people in general around the world will not stop condemning Israel’s actions nor will they stop confronting Israel. The day after the massacre on the humanitarian aid ship by Israeli commandos another ship containing aid departed for Gaza. The ship was named “Rachel Corrie” in honor of the American activist who was deliberately crushed to death by an Israeli bulldozer in Gaza in 2003 while courageously trying to protect a Palestinian family’s house from being destroyed. Her spirit lives on and while the Israeli navy successfully intercepted the ship and diverted it to a Israeli port the Free Gaza Movement, and most importantly the Palestinian people, sent a message that they will not be intimidated by Israel’s brutality. While Israel’s commandos and bulldozers may be able to murder and crush the lives and homes of innocent civilians they cannot bulldoze the dreams and aspirations of the Palestinian people to reclaim their homeland.