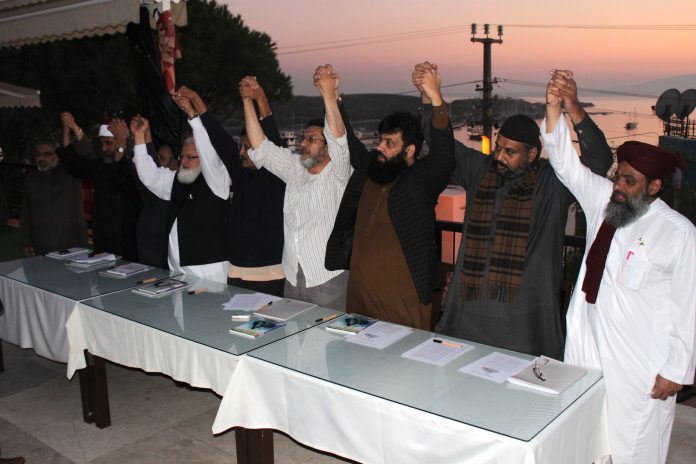 An open letter addressed to the signatories of the UJN Pakistan Unity Declaration also known as The Bodrum Declaration, signed in October 2013:

and those leaders who also participated in subsequent Bodrum Declaration follow-up meetings.

From the UJN facilitators of that process, undersigned.

Our respected ulema and elders,

We pray that this letter finds you all safe in this strained and perilous environment inshaAllah.  Sadly, whilst the coronavirus pandemic has brought many societies to a dangerous brink, it appears that in addition to this, Pakistan is once more verging on the abyss of sectarian, intra-Muslim violence.

Cloaked in the language of religion, sectarian narratives have once again come to the fore, and we the undersigned, find ourselves revisiting the meetings we all attended first in Bodrum, Turkey in 2013 and subsequently in Giresun (Turkey), Penang (Malaysia) and in Lahore, in the intervening years.  This initial meeting resulted in the much valued Declaration of Unity between you all – representatives of different branches of the Muslim ummah within the borders of Pakistan.  Subsequently – in line with the declaration’s commitments – it resulted in ‘Creating a Tolerant Society: A Prolegomena For a Syllabus’ developed by a leading academician in Islamic sciences, Professor Mohamad Nasrin Nasir, to develop Islamic education to deal with the specific problems you all outlined in our meetings.

We find ourselves asking, in 2020, what has happened to all the progress made by and between you all?  When you all signed the declaration of unity you stood together and recited Dua Wahdah just after the maghrib adhaan had sounded.  It was a profound and moving moment that signified a commitment between yourselves to eschew division and work for unity, peace and harmony.

Managing difference is a core part of Islamic governance, yet the sectarian narratives – of which there are many in Pakistan – run counter to this, demanding violent uniformity that runs against this basic tenet.  These narratives serve only to promote the interests of outside powers and nations – something you all identified in our initial meeting in Bodrum.  You also all identified that of those nations interfering in Pakistani affairs, it was the USA that was creating the most murder, mayhem and havoc.  This in itself was and should remain a rallying point for unity between yourselves.

You all committed yourselves:

“To release a joint public statement that states that abusing the Prophet’s (Sallallahu ‘alaihi wa alihi wa sallam) family (including his wives), companions and relatives as well as the religious opinions and beliefs of Muslim groups is Haraam and is against the Shariah.”

and additionally (amongst other commitments) to:

“lobby for the development and implementation of legislation to combat hate speech and push for more effective prosecution of violations of such legislation; and [we] denounce sectarian violence and killings carried out by vigilantes.”

Now is the time for you all to make public once more your calls to such action.

No-one, not us or anyone associated with the project, expects you all or indeed any other Muslims to change their views, beliefs or opinions or accept what they find unacceptable.  However the commitments you gave – clearly demarcating that the issuing of takfir cannot be tolerated – need to be urgently brought to the fore once more.  We urge you at this crucial hour to take the urgently needed moral leadership required in Pakistan and condemn the resurgence of such practice and the incitement of violence and murder that has inevitably followed on in the past.

The eyes of the ummah are upon Pakistan.  You have shown yourselves before to be made of the courage and ethics required to challenge this evil.  We urge you to do so again.

We are, as ever, at your service to help facilitate this and will be contacting you to discuss this matter further and help you fulfil your commitments at these precarious times.

With duas for the safety and security of the ummah world-wide,