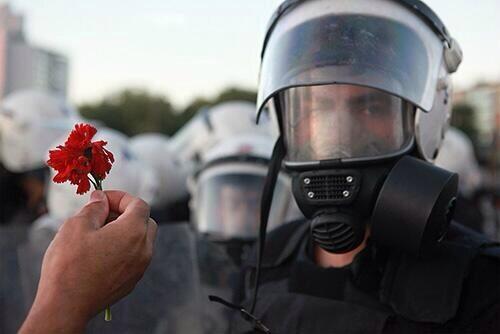 The intention behind transforming Taksim Gezi Park, replacing it with malls and hotels, springs out of a particular way of thinking that regards city space as property for rent. In every location undergoing gentrification, attempts are being made to clear the path for a new and elite style of life -partly modern, and partly conservative. We are witnesses to the fact that while urban renewal projects in Ayazma, Sulukule, Tarlabaşı or Taksim did not improve life standards of the poor and citizens in large, but rather they infuriated people.

Those opposing the rapaciousness of urban gentrification had been silenced before. They cannot brush a similar act of silencing under the blanket this time, as they are faced with an opposition that broke the wall of silence, an opposition that speaks louder in voice and is claimed by the people unlike ever before. People who fought for trees harboring the poor and homeless faced with the harshest form of State’s hubris for protesting the top-down decision to transfer this park into capital. Desecrated by the police, protestors were forced to leave the park. Previously, they attempted to voice their reasonable demands through legitimate channels. However, assimilated in the tradition of Republican Sovereignty that was wayward and confrontational, the conservative ruling party closed its ears to these criticisms. Suppression of each and every reasonable and legitimate protest turned into a habit, throttled people and led them to a politics of resentment. An opposition block that is unprecedented in its diversity conjured up spontaneously and came to light with a new style of opposition.

Wrongs done by the coup of ‘98 are still in the memories of people, those atrocities remain unaccounted for. The party that claimed to be the voice of oppressed mirrors the barbarity of the tyranny it fell victim to. Though now possessed by other hands, unlawfulness still reigns. Thus, tensions that took over the streets this week were triggered by those who wanted to gentrify the city, while ignoring the opinions of its citizens and last but not least by those who ordered the police to violently suppress the demonstrators.

We declare that it is a non-contestable right to make politics about decisions affecting one’s life. Ruling parties that came to power by elections are responsible for listening and consulting its citizens. Politics of the people cannot be reduced to voting every four years. The government should stop blocking legitimate protests and terrorizing the opposition.

Meanwhile, we are aware of the fact that Kemalists of ancien regime, who have been trying to delegitimize the elected government, and daydream about bringing down the government by manipulating the rightful protests are ill-intentioned. We condemn in the strongest terms the enhancement of the secular-religious conflict in hopeful or fearful anticipation of a coup. We invite everyone involved in the making of these collisions to calm down. We reprobate attacks made to hijabis -misappropriation of these harassments by politicians is also despicable.

Ignoring Gezi Park protestors’ demands, and subsequently labelling them as ‘plunderers,’ reflects the arrogance of a political power that mistakes itself to be the country’s landlord. Ravaging of the environment, cars and stores were triggered by the rough treatment of the police, whenever police violence stopped, protests took a peaceful turn.

Independent of the personalities occupying government, we reprove the use of police violence against people. Legal arrangements to stop violent suppression of the right to protest must be made immediately. This country has not made justice to Kurds yet, neither Alevites found peace, nor workers and the poor are taken care of, people are still dying in labor accidents, a small minority is getting rich more and more with the support of State’s invisible hand, millions are growing poorer. A political grammar in which capital and domination sets the scene, that sanctifies political power and economic growth does not reflect Islamic ethics.

In opposition to the arbitrary interventions into the city space, we cry out the priority of the poor. One way or another, pauperized ones exiled to urban fringe will return to the center one day for their rights. Destruction, Derision, Expulsion: this cannot and should not be the only path for regenerating the city. Transformations can be legitimate and persistent only when people are empowered by processes that embetter his life world -not by coercion.

We declare that our sole criteria is justice & tyranny, our primary interlocutors are Muslims. We declare:

Our lives are changing. We will be leaving a different world to our children. We are constituting a new generation that finds its value in what it consumes. A way of life that is ignorant of ethics altruism, that is arrogant and cruel leads to a society that values power, status and money. This path must be abandoned. Our neighbourhood is dying out. We almost turned into a society whose poor and rich are praying in different mosques. Don’t you want our kids to neighbor the poor, and befriend them? Consumption culture that finds its expression in malls is leading us all into a future from which we cannot return.

We are thankful to the protestors who curbed prime minister’s spoiled fantasies about building a barracks/mall/residence. At least, everyone should be a good judge of the protests.

We, as Muslims, have not forgotten how media abused the whole country, and sullied the innocent fifteen years ago. Today, conservative and mainstream media is using the same language to terrorize a certain part of the population -what has changed then? Did we forget what police forces have done to our kids? Why police should be rightful in persecuting others who are not like us? Is not justice a divine command that has to be kept alive against every form of hatred?

Did we forget our responsibilities before our -muslim or not- neighbours? Are not we entrusted the rights of others who do not resemble and think like us? Are not we obliged to defend the rights of those who want to execrably tyrannize over us with power and force?

If we want to regenerate the city, our method should not be destruction, expulsion and derision, we should share our meals with others, we should keep up the justice, we should respect their lifestyles and keep in mind that we are responsible for calling them to rightful path. Remember that prophets spoke softly to everyone. If we do not respect others’ rights, there is no way we can hold on to the rope of God.

If we are inclined to find governors who are unjust justified for we fear for our religious rights and holy spaces, we should know that our religion cannot be protected by a state or a party. By the will of God, our only guarantee is our belief and the sense of justice.

Being victimized in the past neither requires us to turn into tyrants nor to take the side of the tyranny. Quite the contrary, it is our responsibility to appreciate others’ pain, fear and demands. Suffering belongs to all. May God rest souls of the ones who died in the events: Abdullah Cömert, Mehmet Ayvalıtaş, Mustafa Sarı and Ethem Sarısülük. We are sorry for each and every nameless injured.

We find the following five demands made by Gezi Park protestors, and ask for the government to negotiate with the representatives of Taksim Solidarity Coalition: 1: Gezi Park must stay as a park 2: Governors and the police chiefs, and everyone who gave orders for, enforced or implemented violent repression must resign 3: Tear gas, bombs, and other similar materials must be prohibited 4: Detained citizens must be immediately released 5: All the meeting and demonstration bans effecting all squares and public areas must be abolished and stopped.

Protests we are witnessing show that a politics that closes its ears to legitimate demands of society and ignores different opinions continues to produce problems. After all, and in spite of everything, if we learn to appreciate people’s right to city and the ways in which they express this demand as legitimate protest and not a threat, this process will contribute to the transition to a more democratic and free Turkey.