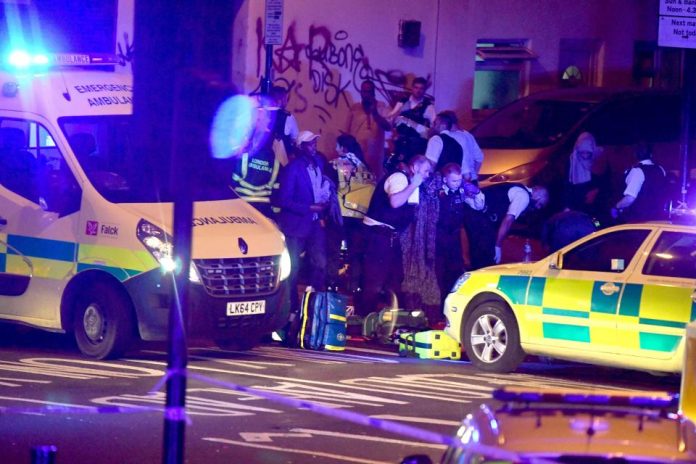 If you want to find the underlying causes of Monday’s evil attack against Muslim worshippers leaving night prayers in London’s Finsbury Park, there would be little point in trawling through the dark recesses of social media and the worldwide web inhabited by the far right.

This is a blind alley – in more ways than one. While the dominant political narrative makes it tempting to conceive of anti-Muslim antipathy as being incited by the likes of the EDL, Britain First, Infidels of Britain, One Britain, National Front and PEGIDA we must be wary of being led into the “fascist fringe” trap.

Because they embody the most extreme forms of Islamophobia it is perhaps understandable for the accusatory finger to be raised in their direction. To do so however would be missing the wood for the trees and letting the main culprits off the hook. Islamophobia long ago ceased being a fringe phenomenon – it is now a mainstream movement led by some of Britain’s foremost politicians and pundits.

Their poison runs freely through the veins of our society. Whether it’s Katie Hopkins calling for a “final solution” against Muslims, Piers Morgan exhorting everyone to “get f…ing angry” at Muslims, Jack Straw taking cheap shots at the niqab, Michael Gove attacking Muslim governors, or Theresa May enacting ever more discriminatory and draconian (indeed Nazi-esque) laws against Muslims, there is not a corner of the mainstream political or media space that is free of prejudice and hate.

Islamophobia in Britain is not a case of the tail wagging the dog. Darren Osborne would have had his opinions formed and shaped by the popular press and our political culture long before he saw any need to visit, if ever he did, any toxic far right website. Indeed, as more details emerge about his life it has become increasingly evident that his despicable attack was motivated by the mainstream demonisation of everything Islamic.

In the hours before he drove to London, Osborne is reported to have been in a pub railing about the Al-Quds Day rally that took place on Sunday in the city centre. Indeed are now tracking the movements of the vehicle he used to ascertain if this was in fact his intended target.

Osborne’s alleged hostility towards the Al-Quds Day rally is revealing for the reason that the annual demonstration was intensely and widely demonised in the popular press. Inaugurated in 1979 by Ayatollah Khomeini who asked for the last Friday in the Islamic holy month of Ramadan to be set aside as a day for uniting against Israel and showing support for the dispossessed and oppressed Palestinians, the event is marked in many towns and cities worldwide. Indeed it has been an annual fixture in London since 1980.

Recent years however have seen a concerted campaign by pro-Zionist and right wing agitators to have the event called off on the pretext that its denunciations of Zionism are a form of anti-semitism and that calls for the dismantling of the Zionist state are an incitement to violence. This is despite the fact that many participants, not to mention speakers, are actually themselves Jewish and/or Israeli and that the event has traditionally passed peacefully without incident. The Zionist lobby and the far right have also held counter demonstrations and tried to provoke, intimidate and even physically attack those taking part in the main rally.

This year was slightly different in that the mainstream commentariat was persuaded to join in. So alongside calls from the convicted wife beater Tommy Robinson and Jayda Fransen, deputy leader of Britain First and the Jewish Board of Deputies, we also saw salaried hate preachers like Maajid Nawaz and Katie Hopkins demonising the event.

Nawaz in particular led the charge on his LBC radio show berating the Mayor of London Sadiq Khan for not banning the rally and accusing event co-organiser, the Islamic Human Rights Commission (IHRC), of endangering the security of ordinary Muslims by whipping up public anger in allowing participants to fly the flag of the Lebanese political party Hezbollah.

“If terrorist flags are being raised in London …Why must ordinary British Muslims be expected to bear the brunt of public anger because of the indefensible political correctness of our institutions and Met police,” he said in a four-minute rant on his LBC radio show.

Let’s just unpack this statement and expose the insidious way in which Islamophobes ply their trade in our cultural and political mainstream. First of all there’s the lies. Hezbollah is a terrorist organisation, claims Nawaz. In fact according to British law, only the military wing of the party is listed as a proscribed organisation. Its political wing is not banned and indeed has been a member of recent Lebanese governments. Nawaz also claims that IHRC wants to fly Hezbollah flags. However, the truth is somewhat different. IHRC welcomes any flags to the event so long as they remain within the law and indeed went to some pains to stress to participants that it would ask for any illegal material being displayed at the rally to be removed.

Secondly in saying that Muslims should be worried about the consequences of the presence of Hezbollah flags, even though these are legal Nawaz is de-legitimising a lawful activity and demonising every Muslim associated with the Al-Quds Day rally (note how despite his pariah status among British Muslims, Nawaz is presuming to speak for all British Muslims, as if this debauched drunkard is somehow representative of them).

Thirdly, in raising the spectre of ‘public anger’ Nawaz is not so much describing a probable public reaction than inciting and justifying it. There is no reason why ordinary people should be angered by the exercise of the legal right to wave Hezbollah flags any more so than they should be by Jehovah’s witnesses exercising their right to knock on people’s doors. ÂÂ In fact for Nawaz to hold up one particular reaction as the preferred response is actually tantamount to goading people to behave that way.

The Al-Quds Day rally is just one example of the extent to which every aspect of everyday Muslim life has been demonised to the point where it has been turned into a caricature of itself in the popular imagination. Muslim schools are assailed for being divisive, Muslim governors for being extremists, madrasas for teaching hate, mosques for incubating terrorists, Islamic apparel for being anti-social, Islam’s modesty precepts for being misogynistic, shariah courts for being oppressive, halal slaughter (dhabiha) for being cruel…..one could go on.

So let’s get one thing straight. The fascist fringe plays a small part in the grand scheme of Muslim demonisation. It may supply the foot soldiers for the existential battle against Islam, but the generals are all the mainstream media and politicians who prepare the ground for their attacks. Their constant drip feed of anti-Muslim stories and policies has turned our political discourse into one big call to arms against Islam and Muslims. It is this that must be tackled if we are serious about arresting, let alone reversing, Islamophobia.