Historically, the Christian Zionist right in America, estimated to form anything up to a third of the country’s voting population, has supported Israel tooth and nail viewing it as the fulfilment of a Biblical prophecy that will herald the second coming of Christ, even if the ensuing rule of that same figure will result in the destruction of the ‘Jewish state’.

To date Zionist Jews in Britain have managed to avoid any such associations. British Jewry, Zionist or otherwise, has instead positioned itself at the forefront of the anti-fascism and anti-racism movements seeing such opportunist alliances as the thin end of a dangerous wedge that could come back to bite the community.

All that may be changing however. Recent years have seen the seeds of an alliance being sown, most notably on the common ground of Islamophobia. The strategy of Zionist Jews to stain the Palestinian solidarity movement with accusations of Islamic extremism has converged with the far right’s identification of Muslims as the enemy within and the substitution of anti-Semitism with Islamophobia.

The dovetailing of interests is leading increasingly to a collaboration on the issue of Palestine where neo Nazis are lending their support to Zionist activists who are in turn acquiescing if not openly encouraging their participation in Zionist pickets and demonstrations.

At this year’s Al-Quds Day demonstration in London in June, far right and Zionist activists openly heckled and abused the peaceful procession as it wound through the city centre. Although the two groups marched and stood in separate locations during the event they were clearly observed talking and laughing with each other after the event. 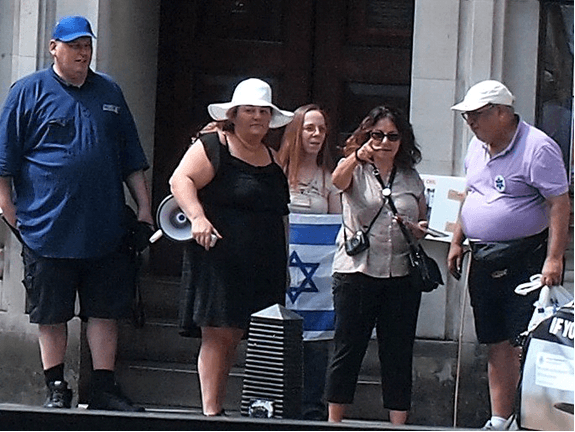 The two groups were again standing shoulder to shoulder in August when they picketed the Palestine Expo in the capital. Photographs show the former vice president of the Zionist Federation, Jonathan Hoffman, next to Paul Besser, the so-called “intelligence officer” of the neo-Nazi group Britain First. Zionist picketers seem to be perfectly comfortable with the presence of a known fascist in their midst.

Indeed, Britain First has made active efforts to win the support the UK Jewish community. In January 2015 the group undertook a “solidarity patrol” in Golders Green, a northwest London neighbourhood famous for its sizeable Orthodox Jewish community calling on Jews to join forces against what it calls ‘the Islamization of the UK’. Britain First leader Paul Golding has openly said that his organisation supports Israel against “the encroachment of Muslims on their territory.” Although Jewish community leaders officially rebuffed the overtures it has not stopped some activists from standing together, let alone adopting the rhetoric of the far right.

This year the Zionist counter protest to the Al-Quds Day demonstration was spearheaded by an organisation called StandWithUs (SWU), a pro-Israel advocacy group that enjoys charitable status. One of the conditions of this charitable status is that it does not promote extremist views or provide a platform for their expression. 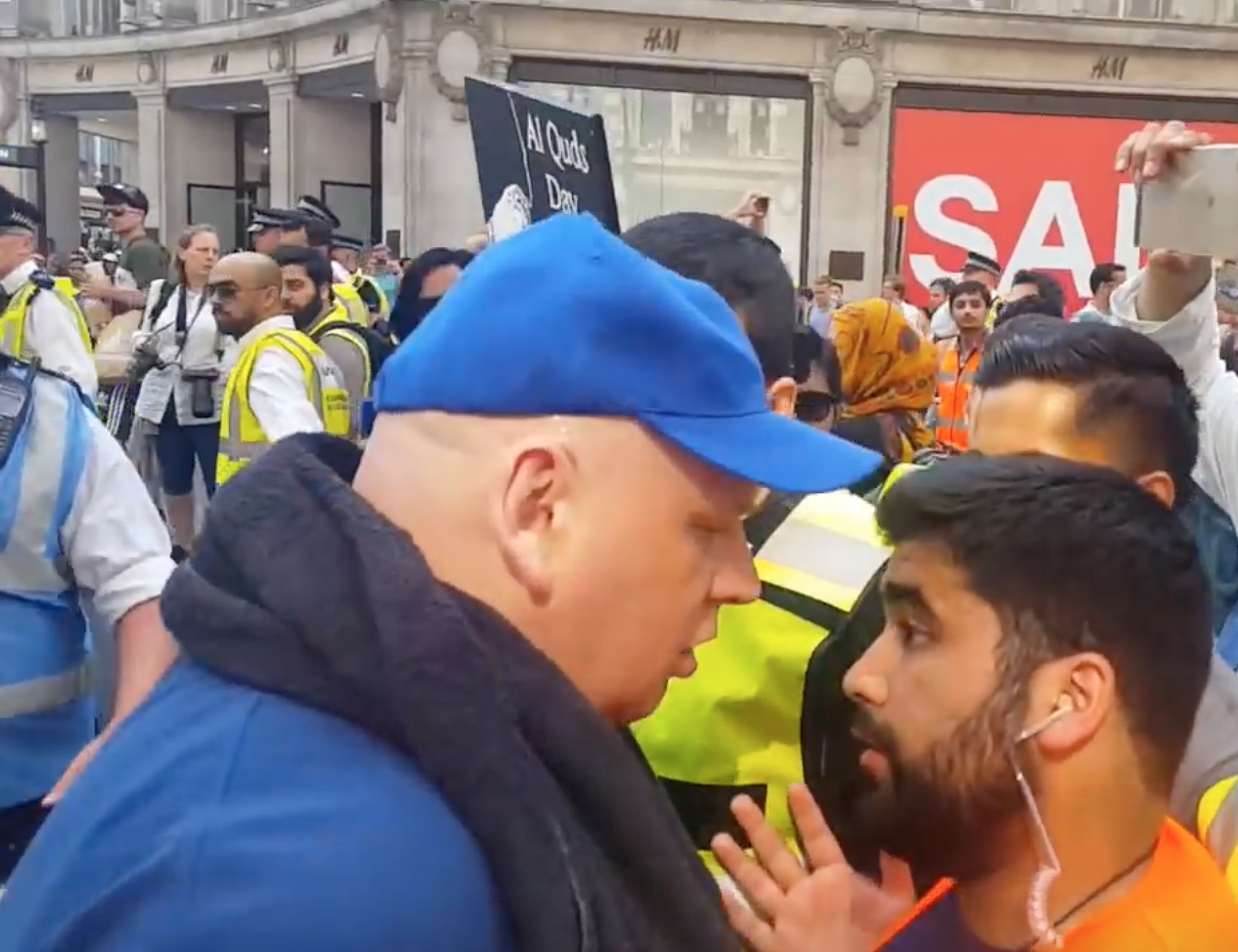 Yet, both before, during and after the Al-Quds Day demonstration SWU was engaged in a political smear campaign against the organisers and attendees that was loaded with racist and Islamophobic rhetoric. SWU’s UK’s publicity for the event was centred on labelling law abiding citizens who attended the march, an event that has not seen a single demonstrator arrested since its inception some 30 years ago, as terrorists, extremists, anti-Semites and hate preachers.

In the counter-demo, attendees continued with this theme. Among the slurs they used were:

-you’re all terrorists. Get out of our country. This is England.

-You’ve raped them all.

-You teach 4 year olds how to murder Jews on Palestinian TV.

-Are you supporting Isis as well today?

-remember the dead in Manchester and London…and Israel by your hands.

These are just some of the comments that IHRC has drawn to the attention of the police and the charity regulator, the Charity Commission.

IHRC has also demanded action against the charity’s hiring of the Israeli ‘educator’ Kay Wilson. While on the one hand Wilson claims “it is both hateful and untrue to say that every Muslim is a terrorist” she has little compunction in being pictured alongside Neil Masterson, a Zionist extremist who was sentenced to prison in 2014 for a frenzied attack on the anti-Zionist MP George Galloway that left him requiring hospital treatment. Masterson later had an indefinite restraining order imposed on him for continuing to threaten the MP. The picture, which was taken at the Al-Quds Day demonstration, was subsequently posted on social media by both Wilson and Masterson (pictured above). Wilson has also defended the EDL leader Tommy Robinson and retweeted messages emanating from a Twitter account that has repeatedly promoted racist and Islamophobic messages.

The far right’s philozionism is also a growing phenomenon on the continent. Geert Wilders, the leader of the Netherlands’ Freedom Party was investigated between 2009/10 by Dutch intelligence officials who suspected his ties with Israel posed a threat to his loyalty to the Dutch state. Wilders, who in his youth lived for two years on an Israeli moshav in the Jordan Valley, has called Israel a “canary in the coal mine”, “the West’s first line of defence against Islam.” In Tel Aviv in 2010, he declared that “if Jerusalem falls today, Athens and Rome, Amsterdam and Paris will fall tomorrow.”

Filip Dewinter, leader of Belgium’s Vlams Belang (Flemish Interest) party, an offshoot of the Vlaams Blok Flemish nationalist party, some of whose members collaborated with the Nazis during the Second World War, calls Judaism “a pillar of European society”, yet associates with anti-Semites, while claiming that “multi-culture … like Aids weakens the resistance of the European body”.

Heinz-Christian Strache of Austria’s Freedom Party which is now in power as part of the ruling coalition government has likened foreigners to harmful insects and regularly consorts with neo-Nazis. Yet in December 2010 he was in occupied Jerusalem alongside Dewinter, supporting Israel’s ‘right to defend itself’.

While most Jews will not be fooled by the opportunist alliance being cultivated by the far right there are clearly some Zionists in Britain and elsewhere who believe that their political interests lie in embracing the same kind of fascism that gave rise to the Holocaust. If they have not already done so, Jewish leaders must heed the advice of those in their own community such as Michel Warschawski and resist these efforts at dancing with the devil for ultimately in shielding Israel in the here and now, in the long term they imperil every single Jew everywhere.

“Some Jewish leaders using this fallacy of (a common) Jewish-Christian civilisation to put the Jews at the front line of the racist anti-Islamic campaign in Europe, especially in France… I warn them….don’t be stupid…”

“The blindness of some Jewish leaders or leaderships here in Europe is terrible…not only unjust towards history (and) the Jewish-Muslim relationship, unjust about the reality and part of a racist global campaign but absolutely self-destructive for the Jews themselves.” ~ Michel Warschawski

Further reading material on this topic can be found in the following articles / websites:

CANADA: Terrorist attack made possible by normalisation of hate culture