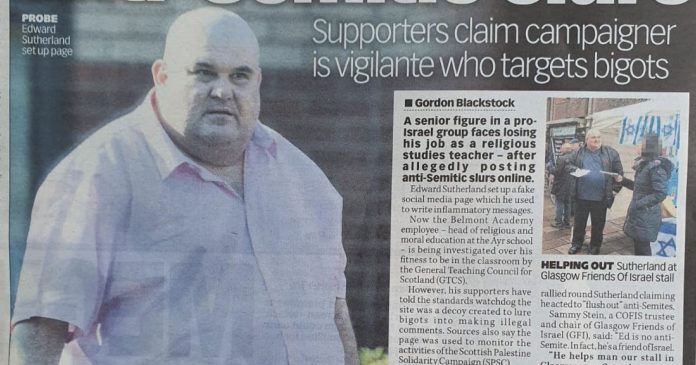 The unmasking of a pro-Israel activist masquerading as an online anti-Semite has thrown a spotlight once again on the ‘black ops’ propaganda arm of Zionist activism.  Massoud Shadjareh discusses the need for this type of behaviour and organisation to be exposed and delegitimised.

Edward Sutherland, a member of Confederation of Friends of Israel in Scotland (COFIS), a lobby group and registered charity which claims to combat anti-Semitism, admitted to posting anti-Semitic material on social media to discredit groups campaigning for Palestinians.

The ruse was busted when members of the Scottish Palestine Solidarity Campaign discovered Sutherland’s real identity and affiliations.

Although his Zionist allies have attempted to excuse Sutherland’s activities as over-zealous and well-intentioned, likening his activities to the entrapment tactics of paedophile hunters, the case is just the latest in a line of attacks that is just too long to be able to be dismissed as an isolated incident.

In fact, the sheer number of similar incidents in the recent past points to nothing short of a systematic, well organised strategy aimed at discrediting and destroying critics of Zionism and Israel.

In 2019, at the height of the Labour anti-Semitism row under former leader Jeremy Corbyn, an investigation by the Electronic Intifada exposed 10 bogus Twitter profiles posing as Corbyn supporters and posting virulent anti-Semitic posts.

Two years prior, the Qatar-based AlJazeera TV network aired a 4-part documentary exposing a plot headed by Israeli embassy staffers in London to undermine pro-Palestine sections of the Labour Party and take down pro-Palestine politicians.

Last month, Reuters exposed what it called a “deepfake” profile that was being used by Israeli and US media outlets to attack the reputations of Palestinian academics. The publications carried op-eds by a fictitious writer called Oliver Taylor accusing Mazen Masri, and his wife, Palestinian rights campaigner Ryvka Barnard, of being “known terrorist sympathizers.”

As a vocal critic of Israel, the Islamic Human Rights Commission has itself long been a target of Zionist ‘black ops’. British Zionism’s leading mouthpiece the Jewish Chronicle has been at the forefront of attempts to vilify the annual Al-Quds Day protest that IHRC co-organises. Two years ago, the Campaign Against Anti-Semitism, whose primary purpose is arguably to stigmatise as anti-Semitic anyone who actively opposes Israel, tried unsuccessfully to bring a prosecution against a pro-Palestinian protestor taking part in the 2017 London rally.

While the scale of the dirty tricks campaigns is worrying in and of itself, what is more disturbing is that self-styled anti-racism organisations and activists are themselves plying racial hatred in order to secure political advantage. Their activities belie their claims to be fighting racism when in fact this aim is being subverted to promote the interests of the Israeli state. It calls into question the very raison d’etre of Zionist anti-racism groups, their role and their relationship to genuine elements of the wider anti-racism struggle.

The misplaced priorities were also in evidence in last year’s general election when to all intents and purposes the Chief Rabbi, Ephraim Mirvis, effectively endorsed the Conservative Party by saying that Labour’s anti-Semitism problem made it unfit to govern. The intervention was the culmination of a long-running campaign seeking to undermine the then dominant pro-Palestine Corbynite wing of the party but singling out Labour as racist, Mirvis effectively exonerated PM Johnson and his fellow Tories for a litany of racist rhetoric and policies against Muslims and people of colour, effectively throwing these communities under the bus.

It is abundantly clear that, as Michel Warschawski amongst other Jewish activists has claimed, some Zionist Jewish groups have adopted the short-sighted position that serving Israel’s interests both trumps the need to genuinely fight racism and anti-Semitism. Their activities have been buoyed by the success in getting the highly politicised International Holocaust Remembrance Alliance definition of anti-Semitism adopted by countries and organisations, with the chilling consequence that as judge, jury and executioners, they can now tar as racist anyone who criticises Israel.

Massoud Shadjareh is Chair of the Islamic Human Rights Commission.