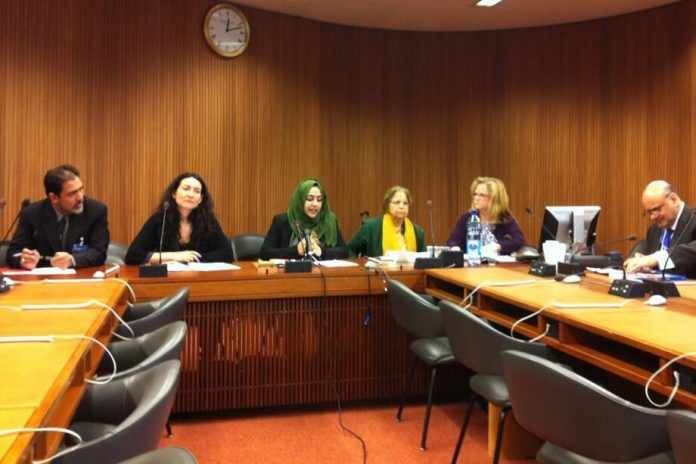 Speakers at a seminar have said that human rights violation in occupied Kashmir are on the rise due to impunity that the Indian troops enjoy under draconian Armed Forces Special Powers Act in the territory.

The seminar on Rule of Law and administration of Justice was organized by Islamic Human Rights Commission UK on the side lines of the 22nd session of United Nations Human Rights Council in Geneva.

The speakers said that the Indian troops involved in serious crimes were not tried due to the leverage they enjoyed under the AFSPA. They said that a Kashmiri youth, Muhammad Afzal Guru was executed without a fair trial.

They urged the world community and the United Nations to play their role for realisation of right to self-determination of the Kashmiris.

Here is the text of the speech that Shamim Shawl, IMWU permanent representative in Geneva, delivered at the seminar:

The 1993 World Conference on Human Rights affirmed the crucial connection between international peace and security and the rule of law and human rights, placing them all within the larger context of democratization and development. The need to reinforce these vital links has been highlighted by the sharp increase in bloody conflicts and man-made calamities in this decade. The United Nations is increasingly combining efforts to prevent or end conflicts with measures aimed at reducing human rights abuses in conflict situations.

Recognizing that human rights violations are frequently the root causes of conflict and humanitarian crises, the United Nations is making efforts towards strengthening its mechanisms.

Promoting the rule of law at the national and international levels is at the heart of the United Nations’ mission. Establishing respect for the rule of law is fundamental to achieving a durable peace in the aftermath of conflict, to the effective protection of human rights, and to sustained economic progress and development.

The principle that everyone from the individual right up to the State itself is accountable to laws that are publicly promulgated, equally enforced and independently adjudicated, is a fundamental concept which drives much of the United Nations work.

The principle of the rule of law embedded in the Charter of the United Nations encompasses elements relevant to the conduct of State to State relations. The main United Nations organs, including the General Assembly and the Security Council, have essential roles in this regard, which are derived from and require action in accordance with the provisions of the Charter.

“For the United Nations, the rule of law refers to a principle of governance in which all persons, institutions and entities, public and private, including the State itself, are accountable to laws that are publicly promulgated, equally enforced and independently adjudicated, and which are consistent with international human rights norms and standards. It requires, as well, measures to ensure adherence to the principles of supremacy of law, equality before the law, accountability to the law, fairness in the application of the law, separation of powers, participation in decision-making, legal certainty, avoidance of arbitrariness and procedural and legal transparency.”

we find a number of instances when rule of law is violated and administration of justice is set aside with contemptuous disregard for the principles of acquisition of impartial and just judgment. When this happens people with conscience raise their voice and declare such acts as murder of justice .Recently what happened in Delhi Tihar jail speaks volumes about the failure of Indian justice system. This has raised a number of questions.

1- Was Guru a victim of political convenience?

2- Why Supreme Court was not allowed to conclude a judgement on his review petition?

3- Why was he not given an opportunity to say goodbye to his old mother, wife and child?

4- Why has his body been kept in continued detention?

5- Was he implicated on the bases of questionable circumstantial evidence?

6- As an individual from that area I agree with Jammu and Kashmir civil society who have said “A conviction affirmed despite serious lapses in the trial. The execution carried out in absolute secrecy – the family of Mohammad Afzal Guru being cruelly informed of the execution a few days later.

No opportunity was provided to Afzal Guru to challenge the rejection of the mercy petition. An absolute shut down in Jammu and Kashmir. The message from the India is clear – there will be no right of mourning for the people of Jammu and Kashmir and “law and order” will be maintained at all costs and as of date this has led to three killings of civilians and countless injured.

Peaceful protests in New Delhi have been met with brute force, executed by the colluding forces of the State and right-wing

The perfect administration of justice implies that all individuals are equal before law, but what happens in actual practice.

In conflict area where I belong to there is always miscarriage of justice resulting in continued detention of innocent people and not only judgements are violated but execution of justice impeded. No peace with out justice and no justice with out peace.

When we were celebrating women’s day on 8th of March Friday March 8. 2013: A Kashmiri girl was injured and assaulted by Indian government forces in northern Kashmir in Kunzar in Tangmarg, Indian armed forces barged into houses in Pandithpor and the forces hit a postgraduate student Massarat, daughter of Ghulam Nabi Sheikh with a cane and broke her teeth. She was rushed to PHC Kunzar and admitted in hospital. Her family said Massarat was received three stitches on her lip .this was the gift from govt of India to Kashmiri women on Women’s Day.