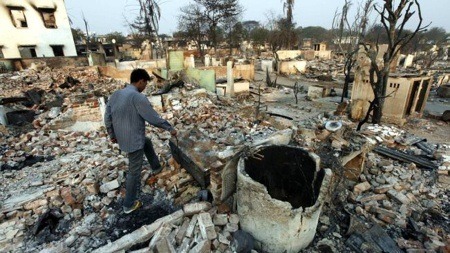 The London-based Islamic Human Rights Commission (IHRC) has called on activists to write to a number of officials, asking them to take action against deadly attacks on Muslims in the Southeast Asian country.

In a statement on its official website on Thursday, the body urged campaigners to write letters and emails to UN High Commissioner for Human Rights Navanethem Pillay, Chinese Foreign Minister Yang Jiechi and the Association of Southeast Asian Nations (ASEAN), demanding them to ensure an immediate end to the violence against Myanmar’s Muslim community, known as Rohingyas.

The IHRC also called upon the international community to speak out against “the violence, intolerance and hatred” that the country’s Muslim population is being subjected to.

The new wave of attacks against Muslims in Myanmar, which broke out on March 20, saw mosques burned, houses razed and charred bodies left lying in the streets, in what many witnesses described to a large extent as part of a well-organized campaign.

The unrest comes amid heightened tensions between extremist Buddhists and Rohingya Muslims which have left hundreds of Muslims dead and more than a 100,000 others displaced since June 2012.

Myanmar’s government has been repeatedly accused of failing to protect the Muslim minority.

Earlier this month, the IHRC criticized the international community for remaining silent in the face of murder and displacement of the Myanmar Muslims.

This story was first published on the PressTV website on Friday March 29 2013. You can read it here