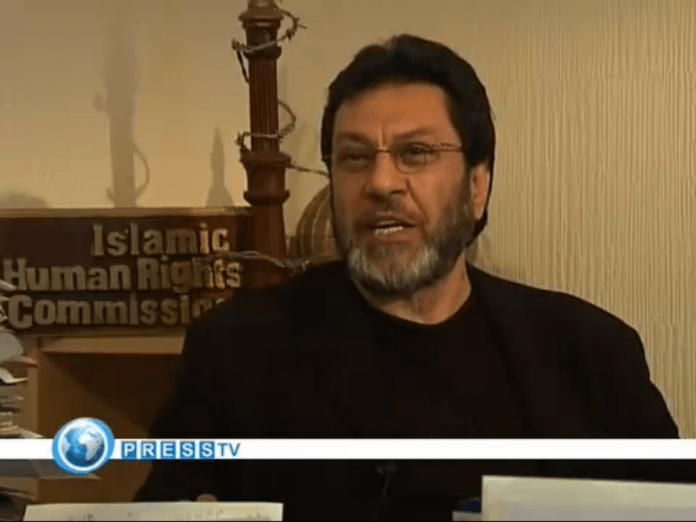 Massoud Shadjareh, with the Islamic Human Rights Commission from London, has joined Press TV’s Debate to share his thoughts on the latest chain of deadly bomb attacks across Iraq.

Press TV: Mr. Shadjareh first of all who do you think is behind the terror attacks in Iraq?

Shadjareh: Well, the terror attacks in Iraq, sort of, appeared a couple of years after the invasion of Iraq when insurgency as policy of targeting US was diverted into targeting and attacking the fellow Muslims and this was something that, obviously, benefits the United States but also it was something that was implemented by involvement of Saudi Arabia and promotion of ideology within Saudi Arabia, which actually is a Takfiri ideology, which is designed to get Muslims killing Muslims and Muslims fighting Muslims.

This was, you know, many people argue was, actually, a deliberate policy to create this conflict, so the United States, as the occupier, will actually not be the main target and you will get this sort of internal fighting within Iraq which, actually, destabilized not just Iraq but the regions beyond it.

Press TV: Mr. Shadjareh a lot of people, however, have been saying that Iraq did see a lot of violence, even the peak of its violence during the 2006 to 2007 period when the US forces were stationed in Iraq and they are even saying that insurgent groups in Iraq were getting weapons from the US, so would you agree on the points raised there by Mr. Peterson (other guest of the show) on whether the US is actually not the side benefiting and who is benefiting from this then?

Shadjareh: Well, it be the US benefiting or not? I mean I actually believe that nobody benefits from creating this sort of conflict but having said that, the United States, and indeed many think tanks in the United States for a very long time including the RAND Corporation, have been arguing that one of the ways to deal with the rise of political Islam is to, actually, have these different aspects of political Islam fighting one another and, you know, it divides the political Islam and indeed Islam into factions and says that conflict between these will be beneficial to the United States, it has definitely been identified in Israel that it is beneficial to the Israel and their interests, because if these groups, indeed in the Middle East, there is a coordination and understanding and cooperation between the Muslim World, then the interest of Israel will be undermined and indeed we know very clearly the United States openly and publicly says that it basically follows the Israeli interest in every way and it will never divert from that.

So we also saw at the time of the invasion, to start with as I explain, the insurgents were against the United States and that through the help of Saudi and their ideology was diverted into killing fellow Muslims.

We also saw a number of events, you know, for example there was an incident when two British soldiers were arrested dressed up as Arabs with beard, with ammunition, with bombs, with grenades and when they were asked why you were doing this, they said that we will not able to divulge why we are doing this and within 24 hours, the British forces with tanks and armored vehicles attacked the prison and released those individuals.

Now you do not need to be a nuclear scientist to, actually, see that this sort of operation blaming on one side or another, will actually create that sort of conflict.

You know, there are many evidences that actually show very clearly that Saudi Arabia is involved not just in Iraq but in Pakistan and even those of us who are researching the situation in Malaysia and Indonesia, we see that this promotion of Takfiri and creating conflict between Muslims is, actually, one of their main projects.

[In response to Mr. Peterson]: Let me clarify. This is actually a case which is well-documented. It is reported within the Western media and indeed these two British soldiers… and the British army went into the Iraqi jail using tanks and forcibly released these guys. It is not, a sort of, mercenaries and so forth.

I also want to say that the reason that one could come up why the West is involved in this sort of thing is the fact that there is a phobia, there is a phobia about Islam, there is a phobia about political Islam and there is a phobia that somehow Iraq is going to become close to Iran and that would be the worst thing that could happen in the Middle East to, actually, create an alternative and create pressure and this becomes a very feasible policy and indeed we have seen… yes there has been conflict between Shias and Sunnis and difference of opinion but never at this level.

I mean at a time of Shah, Shah used to go Saudi Arabia and he was given the red carpet treatment and that sort of Shias indeed have always been respected and tolerated.

What we are seeing now, is a revival of a Takfiri ideology, which really we have not seen in this shape and size ever in the history of Islam.

Press TV: Mr. Shadjareh go ahead and give your response to Mr. Peterson.

You know, the reality is that the number of people, innocent Palestinians, which are killed on a daily basis by Israel and the fact that Israel is bullying everyone, all its neighbors, and it has done so and continues to do so; it really is outrageous.

You know, if you compare that with Iran, Iran has never occupied anyone’s land, it has never fought any aggressive war, it has only been defensive but, you know, we need to look at the reality. People in the Middle East are bullied by Israel. I mean look at the whole scenario as what is happening and look at the number of people who are being killed on a daily basis and on a weekly basis while the international community not only [keeps] silent but actually supports it and says that it supports the state of Israel and indeed the policy of the state of Israel, which is killing innocent people, it is never going to be changed.

Press TV: What do you think about the role of the international community?

Shadjareh: Well, I think that the international community needs to put tremendous pressure on Saudi Arabia and Qatar. Saudi Arabia and Qatar are promoting an ideology of Takfiris and financing it and arming it to the extent of committing genocide and they should not be allowed to create the environment where genocide is taking place and the United States indeed is responsible because this whole conflict and this whole killings started after the invasion.

Read the original story published on 30 July 2013 by PressTV