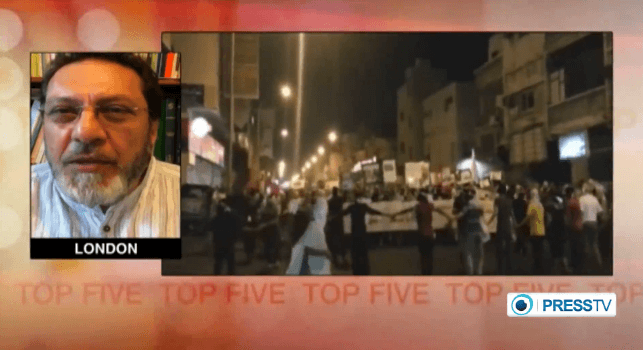 Press TV has conducted an interview with Massoud Shadjareh, head of the Islamic Human Rights Commission from London, about protesters in Saudi Arabia demanding the release of prominent Shia scholar, Sheikh Nimr al-Nimr.

Press TV: Tell us about this situation, it seems that the situation in Saudi Arabia dealing with human rights continues to deteriorate and now of course we have a figure such as Sheikh Nimr al-Nimr who may be facing many years in prison.

What can be done if anything in order to try to put some pressure on Riyadh?

Shadjareh: Well, the reality is that the situation as you said in Saudi Arabia with regards to human rights and political activities of citizens is really becoming much more ridiculous and much oppressive.

The reality is that right now the reports show that there are 30,000 political prisoners in Saudi Arabia living in a very difficult condition. They are being put in prisons like sardines and some of the videos that we have actually exposes the barbarity of the way that these people are being treated.

They are political prisoners because they just want more empowerment and better situation out of this dictatorship and the reality is that the Saudis, the way they deal with these sort of thing, is every once in a while they try to present all the dissent against them as Shia from the Eastern Province and Sheikh al-Nimr was arrested for creating that perception.

But the reality is that all Saudis actually want to change and an overwhelming majority of political prisoners are from the Sunni background.