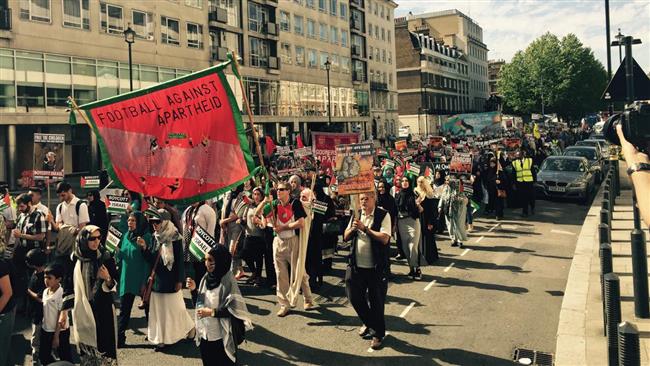 On Friday, the pro-Palestinian demonstrators gathered near the BBC headquarters, to censure the state-funded broadcaster’s coverage of brutal Israeli wars against the blockaded Gaza Strip.

The demonstrators also marched on the American Embassy in London, holding up paper Palestinian flags imprinted with “Boycott Israel” and shouting slogans against the regime in Tel Aviv.

The last Friday in the Muslim holy month of Ramadan has been designated by the late founder of the Islamic Republic Imam Khomeini as the International Quds Day.

Each year, millions of people around the world stage rallies on the day to voice their support for the Palestinian nation and repeat their call for an end to the Tel Aviv regime’s atrocities and occupation of the Palestinian territories.