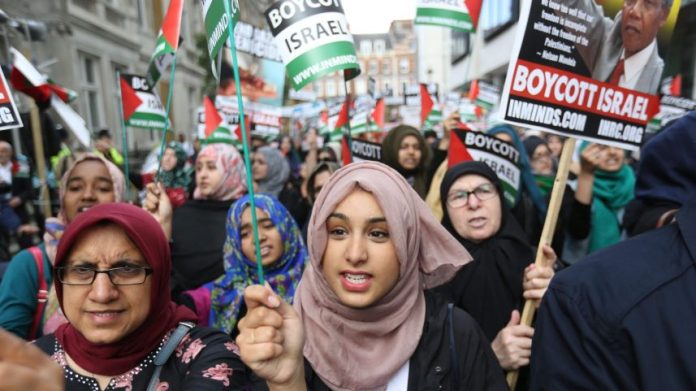 Several thousand pro-Palestinian activists marched through London on Sunday in celebration of al-Quds Day, a reference to the Arabic name for Jerusalem.

Inaugurated by Iranian leader Ayatollah Khomeini in 1979, al-Quds Day is meant to show the importance of Jerusalem to Muslims. It is typically held on the last Friday of the Islamic fasting month of Ramadan.

The London march was organized by the Islamic Human Rights Commission, an umbrella group of Islamic organizations in the United Kingdom, which said the goal of the march was to “call for an end to racism, anti-Semitism and Zionism.”

Among the featured speakers at the event was Michel Warschawski, described as “a prominent Israeli anti-Zionist activist.”

No untoward incidents were reported during the march, which set off from Portland Place in central London and ended a mile away at Grosvenor Square, home to the United States Embassy.

The march, which passed through the busy Oxford Circus, was closely monitored by the Metropolitan Police.

The full piece can be read on Haaretz.com published on 3 July 2016