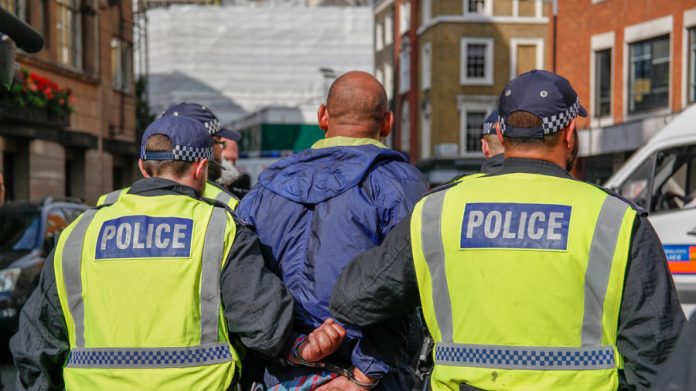 The protest was part of Quds Day, an annual protest against Zionism the current and historical actions of Israeli state. Counter-protests were arranged by supporters of Israel and were attended by British nationalists opposed to the event’s link to Lebanese group Hezbollah. A large police presence mostly kept the two groups apart.

Counter protesters waived England flags as well as banners of the People’s Charter Foundation – a self-described “diverse group of passionate Tory, UKIP, and other patriots,” who “call for the conservation of British heritage and values, including ‘rule of law’,” according to their website.

Attempts to cross police lines led to clashes with law enforcement and demonstrators which led to arrests by police.

Innovative Minds, an Islamic group involved in the Al Quds event, in a Facebook photo album of the march claimed that: “The zionists had aligned with far right nazi/football hooligan groups against the Al Quds rally, they tried attacking the protest several times along the route of the march.”

“The police to their credit managed to successfully repelled them most of the time,” it added.

In turn, The People’s Charter Foundation in its own photo dump of the event, claimed that “police brought along horses to charge the patriots, and kettled us, claiming we could incite violence. Supposedly the Islamists waving signs saying to gas people were peaceful.”

The full text can be found on Russia Today published on 11 June 2018.