Unfortunately, for many of those who took part in the London protests against the Israeli invasion of Gaza last year it looks as though justice may not prevail. The protests that took place in December 08 and January 09 are being investigated on two fronts: the behaviour of the protesters and the charges against them (primarily of violent disorder), and the behaviour of the police and the way in which they handled, or mishandled, the protests. Both groups have been subject to much scrutiny over the past twelve months.

1. Complaints about police behaviour during the protests.

The Islamic Human Rights Commission (IHRC) in London has written an extensive report entitled Policing, protest and conflict: A report into the policing of the London Gaza demonstrations in 2008-2009.

The report includes some very disturbing eyewitness accounts of allegedly unprofessional police conduct, in some cases amounting to police brutality, directed at men, women and children who were exercising their right to protest peacefully.

This includes claims that “law enforcement officials used tactics of intimidation and indiscriminate, disproportionate force”; they “failed to communicate effectively with demonstrators” and employed “heavy handedness” and “abusive language”.

The report makes a particular point of criticising the tactic of “corralling or ‘kettling’ demonstrators”. It claims that riot police “charged into the crowd” on more than one occasion. There were also reports that at one point gas was used against the crowds following which “people complained of dizziness and some were also physically sick.”

One 12 year old boy was reportedly hit on the head with a police baton and it is said that “officers often continued to beat people who were on the ground with the batons… kicking them”.

The Independent Police Complaints Commission (IPCC) is the body which investigates complaints against the police if they deem them to be serious enough to warrant their attention.

However, all of the complaints made to the IPCC in this instance have apparently been dismissed, despite the seriousness of the reported misconduct, including violent police behaviour that, it is alleged, resulted in head injuries, unconsciousness and so on.

Joanna Gilmore, a Researcher in the School of Law at the University of Manchester, who is working very closely on the cases, told MEMO: 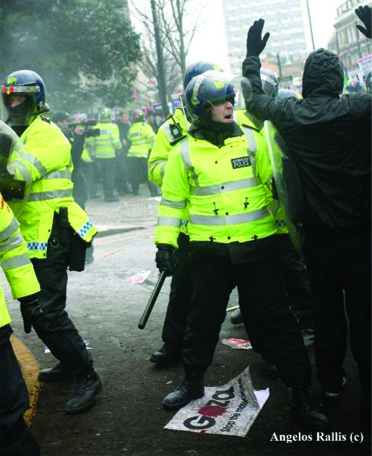 “The police complaints system has yet again failed to hold the police to account for their behaviour. Despite the severity of the complaints and the nature of the injuries suffered by protesters, the IPCC has refused to investigate any of the complaints made by protesters, in the distorted belief that the Metropolitan Police Service can do a good enough job of investigating itself. It is no surprise, therefore, that not one police officer has faced charges, or even disciplinary action, as a result of their behaviour at these demonstrations. In contrast, scores of young Muslims have been subjected to dawn raids, gruelling court procedures and lengthy prison sentences for their part in the protests. It is high time for these contradictions to be exposed.”

In some cases it has been argued that the police officers in question could not be identified as their identity numbers were not recorded by the complainants; this, despite claims that some officers had covered their ID numbers – which is illegal   during the protests.

It is amazing that even with the very clear CCTV images that the Metropolitan Police claims to have of the protesters   which it will not release to the complainants on the grounds that the images form part of an ongoing investigation it cannot identify its own officers.

Protest organisers compiled a 21-page dossier of complaints which they submitted a year ago and to which they have not received a satisfactory response.

They are currently resorting to legal proceedings in order to have their complaints dealt with more effectively.

It is important to state that the police undoubtedly have a very important and difficult job to do.

There were tens of thousands of protesters at these events and the pressure on the police to keep the peace and to enforce law and order was undoubtedly high.

However, for the most part these were peaceful protesters, not rioters, and they should have been treated as such. Most people are in favour of a police presence at such large public gatherings, for self-protection as much as anything else. 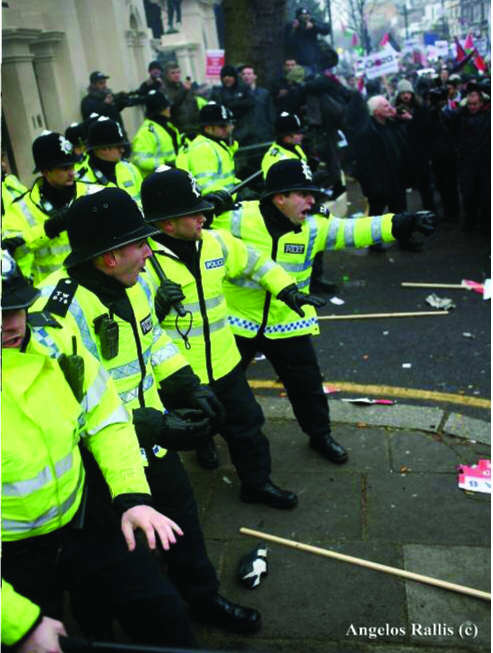 In total, around 93 arrests were made, not only on the days of the protests but also in a series of dawn raids over the following weeks. Seventy-two people were charged with violent disorder, most of them young Muslim men aged between 17 and 20.

It is a worrying state of affairs when the British government does nothing more than utter meaningless calls for “restraint” when Israel’s armed forces commit war crimes against Palestinian civilians but when people in Britain have the courage to speak out against those Israeli atrocities they are targeted and punished by the British authorities.

Plea bargaining is not doing protesters any favours

In their first hearing in Hammersmith Magistrates’ Court in October 2009, most of those arrested entered pleas of not guilty.

When MEMO spoke to some of the defendants outside the courtroom a few admitted to minor lapses of judgement, during which a shoe was thrown, perhaps; others maintained their innocence completely and were adamant that there was no evidence against them. Yet more said that they had been reacting to the behaviour of the police and that their behaviour was re-active, not pro-active.

However, more than 50 of those defendants have now changed their pleas en masse to guilty. MEMO has been told by a source working closely with them that this is not due to any material change in the facts of their cases but because they have been frightened by the heavy sentences passed on three of the protesters who pleaded guilty earlier.

One man was sentenced to 20 months in prison and two women, aged 18 and 19 years, were each sentenced to 15 months for violent disorder.

In the British justice system the rules of plea-bargaining mean that entering a guilty plea at an early stage in criminal proceedings usually results in a lighter sentence.

This encourages those who are guilty not to waste the time and resources of the court in instances where they will probably be found guilty anyway.

However, it offers no benefit to those who are innocent except to entice them to enter a guilty plea when they feel that they are likely to be found guilty anyway as a result of bias or some other extra-judicial motive; it is not unknown, for example, for the judiciary to use a case to send a political message to the wider community, regardless of the lack of culpability on the part of the defendants.

Despite very flimsy evidence being held against some of the protesters   and some have never been shown the CCTV footage the police claim to have   they are now convinced that it is better to plead guilty and receive a relatively short jail sentence rather than risk pleading not guilty and being sent to prison for a longer period. The dates set for sentencing are 12, 19 and 26 February at Isleworth Crown Court.

Ten defendants are sticking resolutely to their pleas of not-guilty, though, and will be fighting the charges, remaining confident that there is insufficient evidence against them. Their court cases will take place in March and April.

Are the magistrates biased?

A possible indication of bias on the part of the judiciary, which may have influenced the defendants’ decision to change their pleas, is the fact that a magistrate is alleged to have advised one of the solicitors to look at the judgement in the Bradford riot cases for an indication of the sentences likely to be passed.

That is deeply disturbing given that the two cases are not really comparable. The Bradford incident is well known to have been a “riot” by any definition, whereas the London cases relate to “protests”.

Why did the magistrate not refer to another case of public unrest such as the poll tax demonstration? Could the presence of young Muslim males in both London and Bradford have been the deciding factor?

Is that what motivated the magistrate to link the two and suggest Bradford as a precedent? In any event, this will have almost certainly succeeded in scaring the defendants, given that the sentences in the Bradford cases included prison terms as long as 4 and 5 years.

The first 15 cases are due for sentencing in the Crown Court this Friday. MEMO will be covering the proceedings and will provide an update on the outcome.