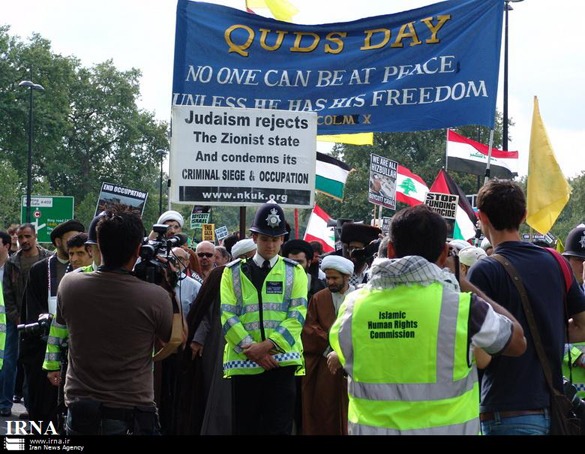 The march, assembling near the BBC’s radio centre in Portland Place for a rally in Trafalgar Square, is supported by a diverse number of groups.

But the Islamic Human Rights Commission (IHRC) is warning that the peace march is being targeted again by far right extremists, like the English Defence League and apologists for Israel as in recent years.

“This year, as in years past, we are seeing a broad range of people come together to stand shoulder to shoulder with the oppressed men, women and children of Palestine,” said IHRC chair Massoud Shadjareh

”We will not be cowed by any fascist, racist or supremacist group. This is a peaceful event and the truth of the cause is manifest,” Shadjareh told IRNA.

The march comes as the British government has stepped up criticism of Israel’s belligerence in recent weeks, condemning the further expansion of illegal settlements in occupied Jerusalem (Quds) and the West Bank.

Rallies have been held in London annually since 1980 after the late Imam Khomeini designated the last Friday of the holy fasting month of Ramadan as Quds Day to express solidarity with Palestinians.