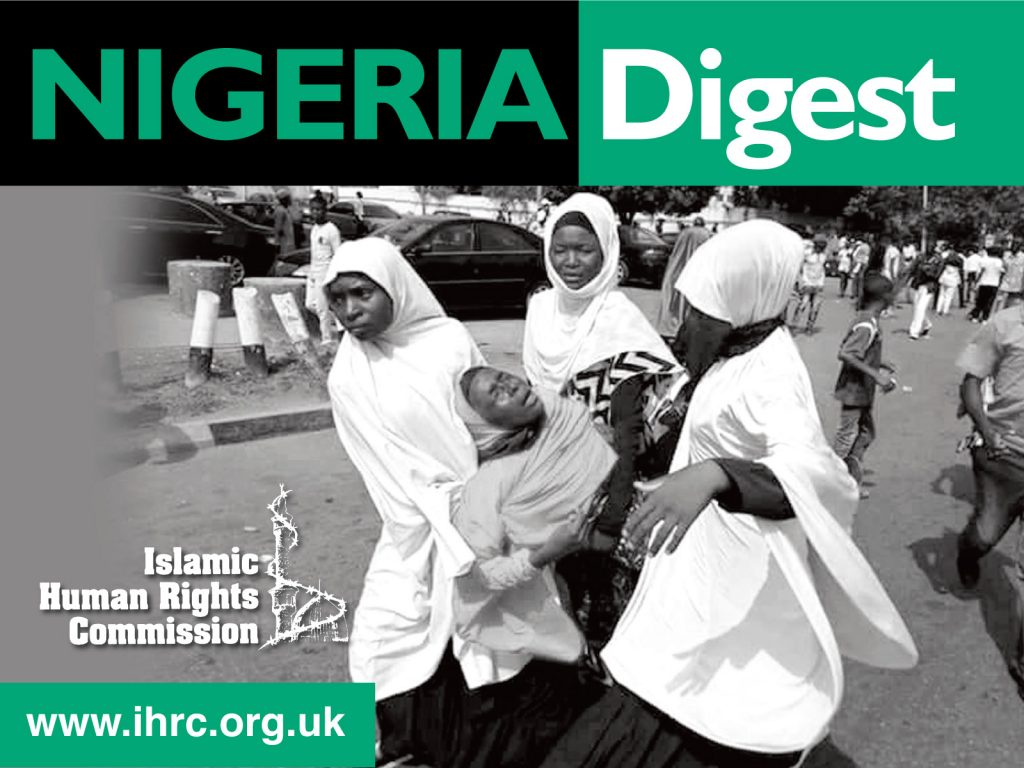 Nigeria Digest #127 (Volume 3 issue 59) – Take Action and write to your local MP and urge him/her to raise this issue in Parliament.

Introduction
We are asking campaigners to write to their local MP and urge them to raise the issue of illegal detention of Sheikh Zakzaky in Parliament. During last two weeks, Zakzaky lawyers filed case dismissal application, IHRC written an open letter to President Buhari and urged him to end Zakzaky’s near five-years ordeal. Followers of Sheikh Zakzaky distributed food to the needy and #FreeZakzaky protests continued in Nigeria.

Please also help us to support those injured by police brutality, and the families of those killed by the security services, by donating to the IHRC Trust Nigeria Fund here.

IHRC are calling upon campaigners to write to their local MP urging him/her to raise the issue of the illegal detention of Sheikh Zakzaky in Parliament. A model letter is provided below. If you receive a response please forward it to IHRC at wajahat@ihrc.org

Intervene to end near five-year’s illegal detention of the leader of Islamic Movement and his wifeI am shocked to find that the Nigerian president’s amnesty on 9 April to 2500 prisoners did not include Sheikh El-Zakzaky and Muallima Zeenah and indeed other political prisoners. The Sheikh and his wife are both aged over 60 and are suffering from severe health conditions.

Despite the fact that over 1000 innocent supporters of the Islamic Movement were butchered in the horrendous Zaria massacre of December 2015, not a single official has been charged or brought to trial over the killings.

Yet we are faced with the spectacle of a politically driven criminal justice system persisting in the prosecution of the leader of Islamic movement, Sheikh Zakzaky and his wife, in defiance of a court order demanding their release, in 2016.

[Your signature if scanning / faxing]

Lawyers for the imprisoned leader of the Islamic Movement of Nigeria, Sheikh Ibrahim el-Zakzaky and his wife Mallima Zeenah, have filed an application seeking to end their near five-year ordeal.

The application to quash the charges was made today in Kaduna High Court on the basis that the charges against the pair are frivolous and an abuse of court process. The court will decide the application when it returns from its summer break at the end of September.

Police Attack Free Zakzaky Protest in Abuja on 7 Aug
07 August 2020
Security Forces attacked peaceful protesters on Friday the 7th of August 2020 with teargas . Thousands staged a protest calling for the freedom of the leader of the Islamic Movement in Nigeria Sheikh Ibraheem Zakzaky and his wife. The protest was terminated at street leading to Garki Hospital. The attack came the protesters were listening to closing speech.

The food items worth millions of Naira was distributed by the eldest son of Sheikh Zakzaky on his behalf and they include bags of rice, indomie and spaghetti. See pictures below or Click here for further details and the pictures.

IHRC Urges Buhari to Free Zakzakys On Eve of Trial
28 July 2020 – IHRC Press Release
IHRC has again written to the President of Nigeria, Muhammadu Buhari, urging him to free the leader of the country’s Islamic Movement, Sheikh Ibrahim el-Zakzaky and his wife Mallima Zeenah and end their near five-year ordeal.

The letter comes as the Zakzakys prepare to be hauled to court on Thursday 30 July to stand trial for their alleged involvement in violence that resulted in the death of a member of the security forces during a massacre by armed forces of supporters of the Islamic Movement in Zaria in December 2015. Click here for further details.
The full transcript of the letter is available to read here: https://www.ihrc.org.uk/news/articles/26432-ihrc-letter-to-buhari-urges-him-to-end-zakzakys-ordeal/